Housed in the familiar Boss compact pedal case with battery and PSU powering options, the Boss DC‑2W is based on the same principles as the original flagship Roland SDD‑320 Dimension D processor, and it can emulate both the discontinued DC‑2 pedal and the SDD‑320. It has dual inputs and outputs, so can work as mono or stereo in and mono or stereo out. Essentially, it is the Waza Craft range’s re‑imagined version of the original Boss DC‑2 — and if you’ve not heard that effect before, it’s probably best described as the ultimate chorus effect for people who don’t like chorus! 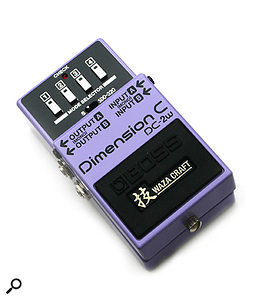 Using all‑analogue audio circuitry, and based around charge‑coupled delay‑line chips, the DC‑2W shares some of the basic concepts of a conventional chorus pedal, in that it utilises modulated delay lines — but it does so in a far more subtle way. The effect is achieved by using dual modulation sections running out‑of‑phase with each other, each having its own internally set depth and rate parameters, along with cross‑feedback networks that connect the sections. Adding feedback in this way adds further complexity to the effect, giving the impression that there are more than two modulation processes at work — so you don’t hear the familiar churning sound inherent in typical chorus effects. To enable all the modulation options to be delivered with precision in a pedal‑sized enclosure, the LFOs and control circuits in the DC‑2W are digital — though I should stress, for those care deeply about this sort of thing, that the audio signal path itself is entirely analogue. In the original DC‑2, which had only a mono input, everything — both the audio signal path and the control circuitry — was analogue.

The subjective result of this design is that the sound becomes thicker and richer, but without any distracting cyclic modulation. If fed into two amplifiers or a stereo recording system, the stereo width is also dramatically increased — an effect that is often described as sounding ‘three‑dimensional’. However, the thickening effect also works perfectly well in mono, if you are not running a stereo guitar rig.

As to the controls, they couldn’t be simpler as there are no level, mix, depth or speed knobs to adjust. The four‑button interface layout is reminiscent of the original SDD‑320 Dimension D hardware, and it provides four preset effects; all the internal parameters are optimally balanced. Each switch has a red LED that shows when it is active. Switch 1 produces the most subtle effect — you don’t really notice the modulation until you turn it off, and then suddenly everything sounds rather flat and ‘one‑dimensional’. Switches 2, 3 and 4 increase both the modulation rate and depth to produce progressively stronger versions of the effect, replicating the sound of the original DC‑2 pedal. Switch into SDD‑320 mode using the small toggle switch, and the four presets take on a different character that’s achieved by changing the modulation parameters and increasing the feedback levels, as well as adding some special filtering into the mix to create a little more shimmer and sparkle. Some additional, unofficial ‘in‑between’ settings can be achieved by pressing some combinations of two buttons when in the SDD‑320 mode.

In use, the pedal is quiet and doesn’t detract from the natural tonality of the instrument. The more subtle switch 1 and 2 settings add a 12‑string‑like richness to the sound (but without the octave strings), while the deepest setting wades into the shallow end of chorus. The SDD‑320 mode does indeed add a little extra shimmer, but both modes have a lot to offer. Unlike conventional chorus, the effect is one that you could leave on all the time for a lot of songs without the effect being too obvious or overstated. The Dimension D is quite rightly regarded as a classic, and thanks to the Waza Craft DC‑2W you can now have it on your pedalboard. Given the high prices being demanded for original DC‑2 pedals (which were discontinued way back in 1989), the more versatile DC‑2W is something of a bargain.