If you're a guitar player who uses computers to create music using samples, loops and virtual instruments but don't need to use microphones, it can be very frustrating being forced to buy an all‑singing audio interface just to record a few guitar parts. So if you want something really small, but elegantly simple — and without sacrificing audio quality — you could do worse than this new product from US company Centrance.

With input and output level controls, a jack socket on one end, and a USB socket and headphone output on the other, the Axeport Pro offers everything you need for no‑nonsense guitar recording on your computer.With its chunky, anodised aluminium case, their AxePort Pro may look like a blue Maglite, but it's actually a fully functional USB interface, with a quarter‑inch, guitar‑level input jack, a headphone jack for monitoring, and two level‑control knobs on the side, one to adjust the input sensitivity and the other the headphone volume. Power comes from the USB port, and a USB cable is included. The input is at the 'flashlight' end (which does light up if you want it to!) and the phones socket at the other, alongside the 3.5mm phones jack. Any other adjustments are made using the starkly simple Control Panel software.

This device works with a Mac or a PC, which sees it as a mono in/stereo out audio interface. A separate USB stick is provided, which includes the necessary installation software. Control Panel has a zero-latency monitoring facility, allowing the user to listen to the live input while recording, rather than the version that has passed through the computer (and which may, therefore, be subject to an off-putting delay). A slider on the control panel mixes the direct AxePort input signal with the DAW output, and a tick-box lets you turn the ring‑light that illuminates the jack end of the device on or off. When using low-latency monitoring, the DAW monitoring needs to be switched off (or turned down for the track you're recording) or you'll hear both the direct and delayed sounds. The bundled software includes the Schwa Oligarc guitar plug‑in effects (Windows and Mac VST, but not AU) and the Reaper DAW for Mac and Windows. 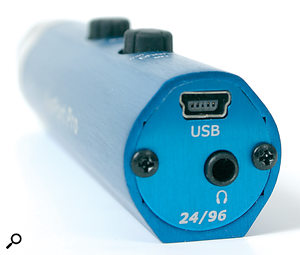 Using the AxePort Pro, which retails at £132$150, is as simple as it appears: you install the software, plug it in, select it as the active hardware for your DAW and start recording. The headphone output is plenty loud enough, and the input has more than enough gain range to handle any type of pickup in normal use. It's also quiet enough to make serious recordings. With passive guitar pickups you may hear some noise, but that will be interference getting onto the pickup windings, not electronic noise from the AxePort Pro. And that's it. You get a lovely, clean guitar recording that you can process with any modelling plug‑in — or with the included Schwa plug‑ins and Reaper. When you're done, everything can be packed into the included velvet pouch and then easily stored in your guitar case or with your laptop. Paul White

This is a typical Centrance product — it's elegant, simple and does exactly what it claims. However, if you don't have good amp-modelling software, one of the solutions that comes bundled with a good range of amp and effect models (rather than just effect plug‑ins, as here) may appeal more, even if it isn't so small.