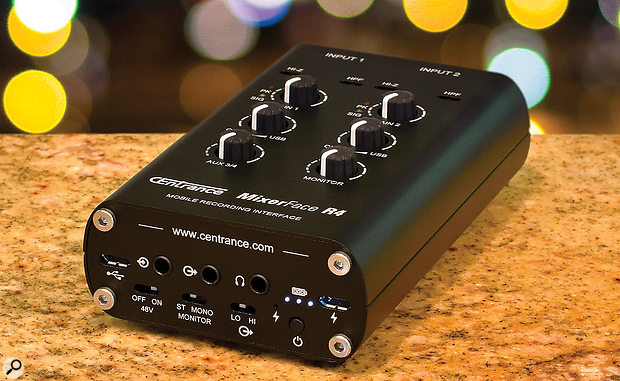 CEntrance, the Chicago-based audio product design consultancy founded by Michael Goodman back in 2000, probably isn't the most familiar pro-audio brand name around. However, given the company's client roster it's more than possible that, without knowing it, you have worked with audio hardware, firmware or software that CEntrance have helped to develop.

On occasion, the company also manufacture in-house products, from the MicPort and AxePort USB interfaces for microphones and guitars, through to more recent consumer hi-fi electronics. However, in late 2018, after almost five years of product development effort, CEntrance returned to audio recording and launched the MixerFace R4 Mobile Recording Interface.

The MixerFace R4 is a physically compact, battery-powered combination of a four-into-two analogue mixer and an iOS, Android, Mac, Windows and Linux compatible 2x2 USB audio interface. The analogue mixer controls occupy the top surface of the R4's anodised aluminium enclosure and their layout is a good example of just how minimalist a four‑into‑two mixer can be when most functionality — apart from its analogue input setup and monitor mix — is delegated to the recording software running on the connected device.

Routing is fixed, with input 1 and aux 3 sent to the left mixer output and input 2 and aux 4 to the right. That two-channel analogue mix then routes to the R4's audio interface to be recorded, either as a stereo pair or as twin mono tracks. The L‑R two-channel USB return from your computer, tablet or phone — which I'm just going to refer to as a DAW from now on for simplicity — routes to the R4's analogue monitor section, where it can blend and be balanced with the channel 1 and 2 inputs. If you're going to be overdubbing using all four inputs simultaneously, you'll need to bear in mind that only that mix will be sent to your DAW, and not the monitor mix, so you'll probably want to set up your recording mix before blending in the DAW return.

The R4 can be switched to monitor in either mono or stereo, again not affecting the signal being sent to your DAW. The overall monitor level has its own master control, and that post-fade mix is available both on the stereo headphone mini jack and on the two balanced mini-jack outputs that enable connection to external monitor loudspeakers.

Rounding out the R4's analogue I/O is a stereo mini-jack aux out — switchable between mic and line levels — the output of which is taken pre the monitor master control. This output is designed for connection to the analogue input of another piece of hardware, for example a DSLR microphone input or a backup audio recorder.

The R4 is equipped with two micro-USB connectors, one of which carries the USB I/O to and from your DAW and the other charges the R4's internal lithium polymer battery. The quoted battery performance is impressive, with up to eight hours of operation depending on the microphones in use. The R4 can be charged from a 2A (minimum) USB phone charger and will apparently reach 100 percent charge from flat in five hours. If you do need elongated operating time, you could leave a charger connected in the studio or take along a powerbank if you're out and about.

Since I don't own any hardware running Linux or Android, I couldn't test those operating systems, but connecting to an iPhone, an iPad Pro and Mac and Windows computers was pain-free, so I wouldn't expect any problems elsewhere. One minor irritation is that connection to an iPhone or iPad requires the purchase of a Lightning to USB CCK (Camera Connection Kit) cable and, similarly, connecting to an Android device means buying a USB OTG cable.

As a 2x2 audio interface, the MixerFace R4 operated impeccably and boasts impressive digital specifications, especially for a truly mobile, battery-powered device. You can record in 16-, 24- or 32-bit resolution at precision-clocked sampling rates of 44.1, 48, 88.2, 96, 176.4 or 192 kHz, giving you options, certain of which — if you've read Hugh Robjohns' article on sampling rates in the July 2012 SOS — you'll probably never use.

One of my favourite aspects of the MixerFace R4 is the mixer-style layout of its analogue audio controls, which ensures that most musicians, engineers and videographers will find its operation fairly intuitive. Assuming that you're using every analogue input and output, you've got two mic/line inputs, a stereo line-level auxiliary input, balanced L‑R main stereo monitor outputs, a pre‑fade stereo aux monitor output running at line or mic level, a headphone output, and a USB send to and from a mobile phone, tablet or desktop DAW — all in an extremely compact, battery-powered package.

Away from the studio, with just a MixerFace R4 at a solo gig, where your voice and guitar are plugged into channels 1 and 2, your backing tracks are coming in via aux inputs 3 and 4, and you're monitoring in mono, you could drive an active PA from the main outputs, and drive your foldback from the aux line-level stereo output. In addition, the R4's USB output could be fed to your mobile phone or tablet if you're video'ing, live-streaming or recording your performance. A band with a FOH mixer could send a stereo mix via USB to the R4 to be recorded or shared on social media with an accompanying video. Before you even get to a gig, you could use the R4 and your mobile phone or tablet to record and video your practice and rehearsal sessions.

If you're into video reportage, you might use the R4's integral tripod nut to mount it alongside your DSLR, run microphones into channels 1 and 2, set the monitoring to stereo and feed the stereo aux output (set at microphone level) to your camera to give you two dialogue or atmos tracks. The R4's USB output could be used to send simultaneous digital audio to a mobile phone or tablet shooting a B-roll, which could subsequently be used to replace the tracks on your DSLR video during editing.

Broadcasters may also fall for the R4's charms, as the facilities that it offers musicians and videographers are also ideal for reporters, commentators and the like, who need to send in audio and/or video reports whilst out on location.

All these potential applications (and there's other similar scenarios that spring to mind) are made possible by the MixerFace R4's level of performance and its running time on the internal Li-Po battery. I ran the R4 on battery power over an afternoon of testing with phantom-powered condenser microphones that ended with plenty of charge still showing on the battery meter. CEntrance's own 'Jasmine' microphone preamplifiers deliver an impressively clean, dynamic and low-noise performance, and the effect of the channel's analogue high-pass filters felt well judged, and seem to me to be especially suited to recording dialogue and vocals.

There's a lot to like about the MixerFace R4, and little to complain about. Although a 2x2 USB audio interface at this price might seem somewhat expensive these days, its truly mobile operability, mixer, level of audio performance, iOS, Linux, Mac and Windows compatibility plus its battery life give it a flexibility of application that, to my mind, more than justifies the premium that you'll pay for an R4, and totally overcomes the inconvenience of having to purchase the required mini-jack audio adaptor cables and mobile phone and tablet connectors.

Whether or not you'll consider a CEntrance MixerFace R4 will depend entirely on your needs and workflows. If, like me, you are looking to improve your audio acquisition capabilities without dragging an equipment handcart around behind you, the MixerFace R4 provides an elegant solution to that conundrum.

A truly mobile, high-performance combination of a four-input analogue mixer and 2x2 USB audio interface, the battery-powered MixerFace R4 offers a high level of analogue and digital performance in a compact form factor that makes it ideal for use by musicians, videographers, broadcasters and podcasters.