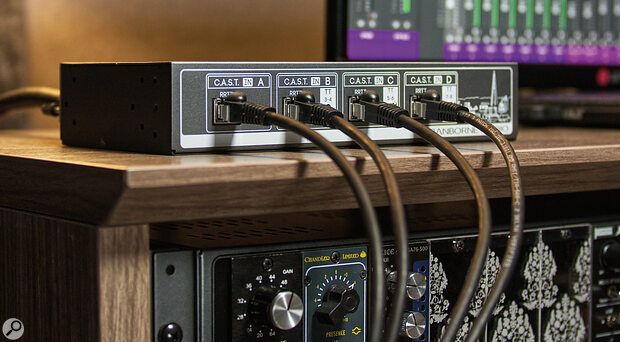 Cat cabling is cheap and readily available — and there’s no reason you can’t use it to run balanced analogue audio signals all over the place!

Though still relatively young as a company, UK‑based Cranborne Audio have already forged an enviable reputation. Their debut product, a 500‑series mic preamp launched in 2018, won an SOS Award, and the 500‑series audio interface and ADAT converter that followed, as well as standalone iterations of the preamp, have garnered plenty of plaudits too. Yet I’d not hitherto had the opportunity to try out the company’s products myself, so when I was invited to evaluate their CAST system, I was keen — and my expectations were high!

CAST is an acronym, the letters standing for Cat 5 Analogue Signal Transport. This is Cranborne’s name for a system they’ve developed for transmitting balanced analogue audio signals along what most of us think of as ‘Ethernet cables’ — though Cranborne are keen to stress that Cat 5e cable rather than plain‑old Cat 5 is the minimum quality required for audio, and they recommend using Cat 6 or 7 where possible, due to the improved shielding of the individual twisted pairs. Cat 5e (and above) is capable of transporting up to four channels of balanced audio over pretty long distances without high‑end roll‑off and with very low crosstalk (up to 100m is recommended, but in practice it will probably reach further). It’s capable of delivering phantom power too.

The ability to send multi‑channel analogue audio and phantom power down cables isn’t exactly new, though, so what advantages might this system offer over traditional audio cables and looms for a recording setup? Well, potentially there are a few. Anyone who has put together even a relatively simple studio setup will know that recording multiple channels of audio while providing headphone foldback for artists can require a lot of cables. If it’s also a location recording setup, or one which needs constant flexibility to accommodate multiple spaces, this can present several challenges. Multicore looms are bulky and, in any case, often require ‘splitting out’ to separate cables to reach different artists, and running many long individual cables can be cumbersome, messy and time‑consuming when setting up and putting away. Importantly, all this cabling can be pretty expensive too.

The beauty of using good‑quality Ethernet cable is that it is a mass‑produced product that’s used in a variety of applications. This means it’s less expensive and more widely available than traditional studio multicore cable (if you need another cable in a hurry it’s likely to be less hard to find something suitable locally), yet the production quality is generally of a high standard. Cat cable is commonly used in networked digital audio systems, such as Dante, but the digital systems themselves can be pricey and they inherently introduce some latency.

There are other analogue audio‑over‑Cat products out there, but typically they’re designed to convert between conventional socketry (ie. XLRs or TRS jacks). The CAST system can do that, of course, but it is also included as standard in all the standalone products in their range — their interface, their converters, their (non‑500‑series) preamps/DIs and their headphone amp all feature RJ45 CAST ports. (It’s important to point out that these Cranborne products also feature traditional analogue connectivity — they don’t rely on CAST to function.) So, in CAST, Cranborne have developed an entirely analogue, passive system that presents a number of possibilities for home and location recordists, as well as for studio owners such as me.

The subject of this review is the CAST Intro Bundle, but to help me understand the CAST ecosystem more generally Cranborne also sent along one of their EC1 preamps (which Matt Houghton reviewed back in SOS Feb 2021). I’ll explore both how the CAST Intro Bundle can function as a standalone means of connecting things up in your studio, as well as touching on some the possibilities of going ‘all in’ with the CAST ecosystem.

The Intro Bundle is intended to give you almost everything you need to start using CAST, regardless of whether or not you already own other Cranborne gear. At the heart of this package is the N8, which Cranborne describe as a ‘distribution hub’. It’s a passive, half‑rack‑width device which allows you to connect up to four Cat 5e cables at the front to send and/or receive audio to other CAST devices. Conventional analogue connectivity is courtesy of two DB25 D‑sub connectors on the rear, so you can hook it up to eight inputs and outputs on an audio interface or mixing desk pretty easily, so long as you have the appropriate cables. For each of the Cat 5e connections, a switch determines what output channels you wish to send to the artist or performer and, if you have multiple breakout boxes (something I’ll explore below), you also have the option of sending everyone the same mix or creating bespoke options for each box.

While the N8 takes care of one end of the system, you obviously need one or more CAST‑compatible devices at the other too, and the Intro Bundle includes two. First, there’s the N22, a passive device about the size of a large‑ish DI box. This provides you with two balanced XLR inputs, two balanced XLR outputs and two balanced TRS quarter‑inch jack outputs (these carry the same signal, and allow the N22 to act as a splitter if required). A single Cat 5e cable connected to the N22 allows you to send two channels of audio to your mixer/interface, and to send a stereo headphone mix in the other direction. With the N22, the artist would need a headphone amp connected to the N22 using XLR or jack cables, but the other included CAST device, the N22H, simplifies this scenario. It features the same input and output options as the N22 but also has a headphone amplifier on board. It’s a decent one too, with the same specification as that which features in their flagship 500R8 audio interface. To make this possible the N22unit requires a power source, and it comes with a suitable supply, but it can also be run (Cranborne say for up to 10 hours) on a standard PP3 9V battery, or from a pedalboard supply. Completing the Intro bundle are two 10m Cat 6A cables and a neat racking kit, which allows the N8 hub to be mounted in a standard 19‑inch studio rack. 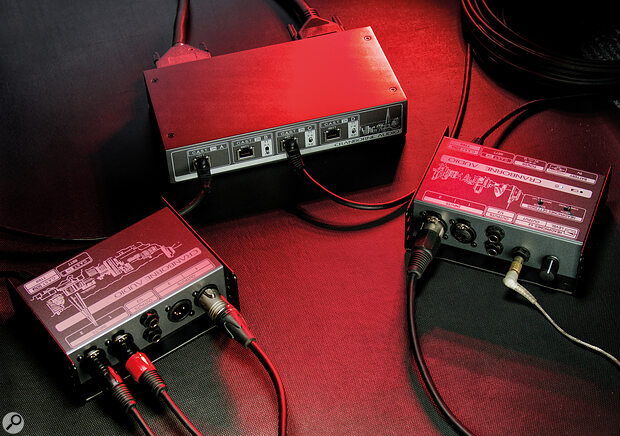 The full bundle includes the N8 hub (plus a rackmounting kit), as well as the N22, N22H, and some suitable Cat 6 cables.

On first reading about the CAST system, several scenarios in which I might find it useful in my studio sprang to mind almost instantly. My studio has a main live room in which I do the vast majority of my recording, and in this space a traditional stagebox setup is used to route signals to and from the control room. We often find ourselves recording in other areas around the studio, though, such as corridors and even an internal roof space! Whilst it would be fairly easy to install traditional cabling around such spaces, that means more time, money and cables — not to mention the effort of getting it done! Using the N8 distribution hub and four Cat 6 cables, it took me about half an hour to connect up two corridors, my roof space and the far side of the live room, which is a location I’ve found awkward to reach on some sessions. These inexpensive cables can now just stay in place and be ready to send or receive audio by connecting either the N22 or N22breakout boxes. (If you were planning on using this system regularly for temporary location setups, you could probably get things up and running more quickly with practice!)

If you have a recording rig that consists of a computer and an audio interface, this bundle would open up the possibility of routing audio to/from several different rooms or spaces.

To dig a little deeper with the N8 hub, I first had to obtain a suitable D‑sub cable — you’ll need to budget for this if you’re interested in buying the Intro Bundle, but seeing as Cranborne don’t know what connectors your console or interface will need on the other end, they probably made the right decision not to include a loom! Once I had the appropriate cabling, I connected the N8 to my Audient 8024 mixing console, with inputs coming straight into spare channels on the desk and outputs being fed by the desk’s auxes. This worked superbly for me: once signals came into the desk they could just be treated the same as any others, and it gave me the ability to create additional bespoke headphone mixes via my desk’s aux channels and route them to any conceivable space in my studio. Very handy indeed! And in terms of performance, the test system worked flawlessly, with absolutely no discernible loss in audio quality compared with traditional cabling.

Using the EC1 (which really does sound great, by the way) as a standalone preamp with a small portable recording setup was simple. I could come straight out of the CAST output on the preamp and directly into my interface via the N8 hub. This is a pretty basic scenario just to confirm that things work as intended, but it’s not hard to see the possibilities that adding CAST preamps to this system opens up. And, of course, if you were to use Cranborne’s 500R8 as your interface, or expand your own interface with their 500ADAT converter, you could dispense with the N8 and have a very streamlined system.

I’ve largely described using CAST to overcome some pretty specific connectivity and routing challenges in my own studio, and if I were to buy into the CAST ecosystem more generally it would be pretty easy and affordable to install Cat cabling all over the place to open up yet more options. But, really, I think CAST has been conceived primarily to help recordists wanting to ‘create’ a small studio setup rather than to augment one like mine. For instance, if you have a recording rig that consists of a computer and an audio interface, this bundle would open up the possibility of routing audio to/from several different rooms or spaces, whether you’re working in a house, a studio or elsewhere. It could potentially make a small mobile tracking rig much quicker to set up, more flexible and easier to move around too. And it’s not hard to see just how useful this system could be in a venue or stage situation, where cable mess can have more serious implications and unobtrusive longer cable runs would be a big advantage.

CAST is one of those great, simple ideas and, importantly, it’s one that’s been nicely executed. Whilst there are plenty of digital connectivity options available these days, these have their downsides (notably latency and cost), and many people will prefer the idea of moving their audio around in the analogue domain. It’s been a running joke at my studio that, since I started this review, we have Cat 5e cable running everywhere now — but the cables are there because this is such a simple, elegant solution that’s made it easier to be more creative with using different spaces. So if you’re looking to expand a smaller setup into more of a functioning ‘studio’, the CAST system could solve a number of the issues you’ll inevitably face, in a quick and relatively affordable way.

Cranborne’s CAST Intro Bundle provides you with everything you need to get up and running with transporting audio over good‑quality Cat cable. It’s a well‑thought‑out system that could transform a small studio setup, or be an excellent problem solver in larger facilities and live venues.