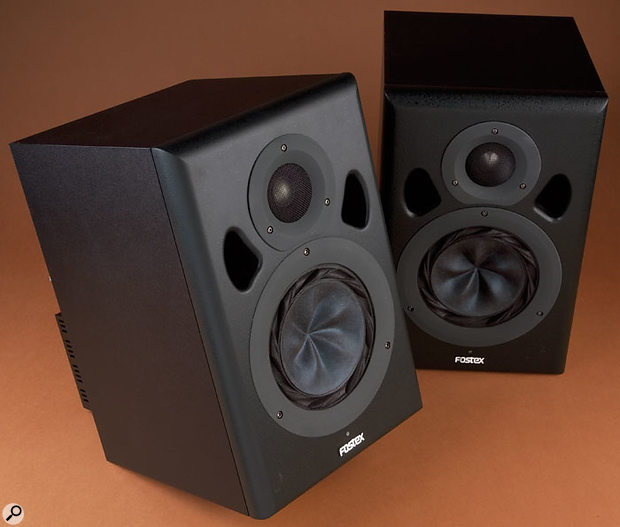 Several unusual new technologies have been combined in this new product from Fostex to create an accurate mixing tool.

This intriguing new product from Fostex is priced within a few pence of the manufacturer's similar PM1 model, reviewed in SOS November 2003, which seems a little odd from the marketing point of view. However, the new speaker boasts several interesting features (all denoted by snazzy acronyms) designed to give it the sonic edge.

First, however, let's look at the basics. This is an active two-way design built into a compact 11-litre reflex cabinet with a pair of ports on the front baffle. The actual dimensions are 350 x 230 x 334mm (hwd) and each speaker weighs about 13kg. The driver complement consists of a 6.5-inch magnetically shielded doped-paper woofer and a 0.75-inch metal-dome tweeter with a magnesium diaphragm. The substantial discrete solid-state amplifier chassis on the rear panel provides a nominal 60W for the woofer, and another 40W for the tweeter.

The tweeter is protected behind a wire grille and is set into the front baffle at the back of a shallow waveguide which ensures time-alignment with the woofer and smooth high-frequency dispersion. The very unusual woofer design is what first catches the eye, though, looking like it is intended to juice soft citrus fruits! In fact, this is Fostex's HR (Hyper Radial) cone design, which is claimed to be extremely rigid while also being lightweight — the ideal combination required to provide very low bass distortion figures. Equally important is the way the cone is attached to the driver chassis, and we have another innovative design with its own acronym here too. This is the UDR Tangential Edge, which is said to eliminate unnecessary resonances. UDR stands for 'Up/Down Roll' and describes the very odd-looking twisted effect of the surround. 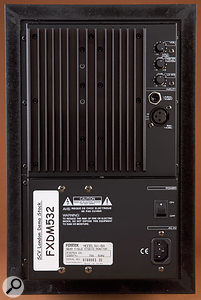 Photo: Mike CameronWe're not done with the acronyms yet — there is another hidden away inside the cabinet. Standing waves inside rectangular speaker cabinets have always been a problem, and various techniques have been devised to deal with them. In the case of the NX6A, Fostex have combined long-fibre wadding with what they call HP Sound Reflectors. These appear to be multi-faceted inserts — one on the rear wall and one at the base of the cabinet — which are intended to scatter the sound internally, preventing standing waves (and hence resonances) from forming. The complete speaker is claimed to enjoy a frequency response of 55Hz-38kHz at the -6dB points, and boasts a maximum sound pressure level of 104dB/W at one metre.

The rear panel is equipped with three rotary controls: Volume, Lo EQ, and Tweeter Level, and two input connectors — a balanced XLR (+4dBu nominal sensitivity) and an unbalanced quarter-inch socket (-10dBV). The latter takes priority if both are connected. The Volume control turns the signal all the way down to silence, which is useful. The Tweeter Level control has a ±3dB range and simply adjusts the gain of the appropriate amplifier. The crossover frequency is unusually high, at about 7kHz, so this control really only affects the brightness of the top end. The Lo EQ is a peaking equaliser centred on about 55Hz with a ±3dB range again, and is intended to provide some compensation for boundary effects when placing the speaker close to rear walls or corners. The only other rear-panel facilities are the IEC mains inlet and rear-panel power switch. An LED on the front baffle illuminates when the speakers are powered.

I set the NX6As up as usual alongside my reference three-way PMC IB1s — not a fair comparison, I grant, but one which provides a useful benchmark reference point for me. My initial reaction was of a fairly forward character in the mid-range, with a very tightly controlled, but rather dry, bass and a well extended and neutral top end. The response changes fairly smoothly off-axis, but it is clear that these speakers have a fairly narrow dispersion. At 30 degrees off axis the response was almost 10dB down by 6kHz, so aiming the speaker directly at the listening position is important.

On a range of familiar listening material, the NX6As gave a very stable and precise stereo image, with plenty of mid-range detail and a punchy-sounding bass. Unlike many ported speakers, these monitors don't overdo the bottom end at all — they appear over-damped if anything, which gives the subjective impression that there isn't a lot of weight or depth. However, as on the PM1s, it is easy to separate out bass instruments in the mix and judge their balance with accuracy, which is how monitor speakers are supposed to work.

The only thing that troubled me slightly was the forward mid-range — something it shares with the PM1s — and looking at the published frequency response this appears to be caused by a broad peak extending between about 1kHz and 3kHz, reaching about +3dB relative to the rest of the response. In fact, below 1kHz, the response extends as an almost flat line down to 60Hz before falling away smoothly at about 18dB/octave. Above 3kHz the response is equally flat up to about 9kHz, above which it falls in a series of broad peaks and dips, but is still only about 10dB down at 40kHz.

Returning to that mid-range peak, it is something of a double-edged sword. On the one hand it provides an impression of lots of detail and ambience, and of being able to look into a mix. On the other hand, it has a slightly 'shouty' quality that some may find fatiguing after long mixing sessions.

In a typical home-studio environment the NX6As are capable of playing very loud without obvious compression effects until silly volumes are reached. The spectral balance also remains consistent once you get above a certain threshold — as with most reflex speakers, the bass seems to disappear when the volume is turned well down. Given the UK price, the NX6As are impressive and well-built, visually distinctive, and capable of a fine, revealing sound stage that helps rather than hinders the mix process.

A well-built and well-priced active monitor. The slightly forward character and lean bass won't appeal to all tastes, but you do get a detailed sound stage which facilitates accurate mixing.