Latvian mic specialists JZ aim to bring their distinctive design and quality sound within reach of the masses. Have they succeeded?

JZ microphones are no strangers to our pages — we reviewed their Black Hole back in December 2008, and the Vintage 11 more recently, in January 2012. The J1 reviewed here, however, is the company's first attempt to reach a more budget‑conscious market. It isn't exactly a cheap microphone, but it falls towards the lower end of the mid‑priced range. Handcrafted in Latvia, like the company's more up‑market mics, the J1 is the brainchild of company founder Juris Zarins, who spent many years restoring microphones before going into designing and building them, and whose initials give the company its name.

The J1's distinctive flattened body shape is finished in a flat grey paintwork and houses a 21mm diameter, centre‑terminated, cardioid‑pattern capsule. This is apparently an all‑new capsule design and is produced using what JZ Microphones refer to as their patented 'Golden Drop' technology, which suggests that there's something special in the way they apply the conductive gold layer to their diaphragms.

The microphone ships in a simple cardboard box with a dedicated shockmount, which screws into the base of the microphone body via two thumbscrews. A couple of small, rubbery isolators take the place of the usual cat's cradle of elastic bands. A crosshead screwdriver is needed to tighten the swivel joint if it works loose but, once tightened, the mount is quite secure.

Many capacitor mics suffer a deterioration in performance caused by reflections from the basket support framework, though JZ claim to have overcome this. I've often thought that with cardioid mics, the most logical place to put a support would be directly behind the capsule, where it is least sensitive, leaving the front and sides clear, and that is exactly what JZ have done. The double‑layer basket, which is mechanically very rigid because of it's shape, should have little effect on the sound, so it would be reasonable to expect fewer wrinkles in the upper reaches of the frequency response plot.

JZ state that the mic is sensitive to frequencies between 20Hz to 20kHz, but with no printed response curve in the box and no mention 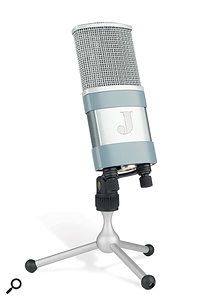 of how many decibels down the response is at these points, it conveys little useful information. In fact the entire spec sheet is printed on a part of the cardboard packing, so there's no actual manual other than an online download — which gives you more or less the same spec and little else.

The sensitivity figure given is 22mV/Pa, which is typical for a microphone of this type, while the equivalent input noise is an unusually low 6dB (A‑weighted). There are no pad or filter switches, though the mic can handle SPLs of up to 134dB before the distortion exceeds 0.4 percent. Standard 48V phantom power is required for operation, and the output XLR connector has gold‑plated pins to guard against corrosion. JZ offer a free extended warranty, and apparently also give you discounts on future products if you do an independent review and put it online.

My first impression of this microphone was that, more than with most large‑diaphragm mics I've tried, pretty much everything came back sounding much like how I heard it in the room, suggesting that there's little, if anything, by way of presence peaks or other response doctoring. The lack of rogue reflections around the capsule almost certainly helps in this respect too, lending the mic a strong sense of focus.

Speech came across as sounding very natural and well‑balanced with smooth highs, while my acoustic guitar sounded very much like the instrument itself as heard from the players perspective. This tendency towards honesty should make the mic more flexible in recording a variety of vocal types, as opposed to searching for a mic where the response anomalies support the singer's voice. A little EQ can always be used to fine tune the sound, and because this mic is quieter than most, you can add plenty of high‑end air or upper‑mid sparkle if you feel you need it, without worrying about hiss. A low‑cut filter somewhere in the recording chain would have been useful when recording vocals, though, especially if you're brave enough to work without a pop screen.

Perhaps the big surprise came when recording my electric guitar amplifier. Many general‑purpose capacitor mics fall down in this application, adding too much 'scratchy' high end, but not so in this case: once again, the playback came very close to what I heard standing directly in front of the amp. There was plenty of weight, bite and high‑frequency detail, but none of that unwelcome fizz that some mics seem prone to picking up. Here I had the mic set up around a foot from the grille and just off‑axis from the speaker.

Given its affordable price, the JZ J1 has shown itself to be a very classy microphone capable of delivering the goods in a number of situations, especially where you want to start off with a pretty natural sound and then work from there. It has the coveted combination of detail and smoothness normally associated with prestige microphone models, so would make an excellent choice if you need just one good mic that is flexible enough to use on more or less anything. Don't be put off by its unconventional looks: even those who already have a few decent mics in their collection might just find that the J1 becomes their new go‑to model.

The closest alternative I've heard is probably the Audio‑Technica 4050, though that is a multi‑pattern mic. There's no shortage of alternatives in the same kind of price range, though, with obvious contenders coming from Rode, SE and Audio‑Technica, but every mic has its own character so one person's alternative is another person's non‑starter.

An affordable mic that can hold its own against models costing far more.