We examine the Swedish soft-synth specialists' first foray into the world of hardware: the Balance. 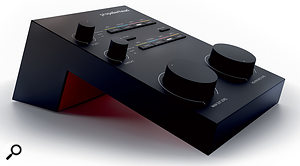 As all marketing experts and Dragon's Den (Shark Tank in the US, apparently!) viewers know, every product needs a Unique Selling Point. For audio interface manufacturers it's usually the particular combination of connectivity, audio and build quality, convenience, portability and cost that each model offers which affords it some uniqueness. It's much rarer to encounter genuine 'one-off' features, but that's exactly what we find with Propellerhead's first hardware product, the Balance.

I'm going to get on to those Unique Selling Points in a moment, but first of all let's get all the usual key facts and figures out the way.

The Balance is a USB2 bus-powered audio interface — in fact it's only bus-powered, with no mains or battery option. It has a two-in, two-out design and supports up to 96kHz, 24-bit operation. The output channels can simultaneously feed a pair of monitor speakers and headphones, and there are separate volume controls for both. A simple Direct Monitoring facility routes inputs directly to outputs to achieve near-zero-latency monitoring during tracking, and for when you want to use the Balance independently of your DAW. Used with OS X it's class-compliant, and doesn't require drivers, but for Windows users an ASIO driver is supplied.

Now for the more unusual features. The Balance has something I've never encountered before: front-panel input selector buttons, like you see on many hi-fi amplifiers. These work in conjunction with multiple physical input sockets for each channel: two balanced line level inputs on quarter-inch sockets, a high-impedance unbalanced guitar input with switchable pad on another quarter-inch socket, and a balanced mic input with switchable 48V phantom power on an XLR socket. Clearly the idea is that you can leave multiple input sources permanently connected, and then choose which you record with the input buttons. It's a neat idea. Also uncommon, particularly at this price point, are stepped gain controls: 21 positive notches take each of the two pots from minimum to maximum gain level.

Clip Safe gives Reason 6 and Essentials users a back-up against clipping distortion. When it's enabled, sections of audio clips that have clipped are shown by red areas. All is not lost — just click the clip's 'CS' button or choose the 'Heal Clip Safe Clips' menu item and it's substituted with a distortion-free version.The really unique features, though, are all related to the Balance's integration with Propellerhead's DAW software, Reason 6. Most notable of these is Clip Safe. Press the front-panel button and a single channel (either left or right, you choose in Reason) is recorded through both channels' A-D converters, and a pad is engaged on one of them. Then, if your 'normal' recording clips, causing nasty digital distortion, you can choose (again in Reason) to 'heal' the take with the padded version, which will most likely be clip-free. Reason applies the necessary gain boost, in the software, to bring the padded take up to the original desired recording level, and catastrophe is averted. If there's a down side, it's that Clip Safe effectively turns the Balance into a single-input interface. But within that limitation the whole process is slick and easy to use. Propellerhead call it a "red-eye tool for recorded audio” and that sums it up nicely.

There are two more Reason-only features. The first is a Meter/Tuner button, which brings up a floating level meter window and guitar tuner display. The second is a Ready LED next to each channel's gain pot that confirms the channel is routed to a record-enabled Reason track.

I'm going to resist all temptations towards poetic rambling and simply say that the Balance sounds just fine. The recordings I made during the test period, via all the inputs, were full-sounding and detailed. When compared to my RME Fireface UFX — a completely different beast, five times the price — they didn't give much away. I fancied the RME sounded a bit more transparent in the mid-range, and the stereo image more generous, but there wasn't much in it. And even then, this was not true double-blind, instantaneous-comparison testing, so it's all a bit subjective. Certainly I could hear no obvious flaws.

Because of the Balance's not-insignificant price tag, there's been some Internet forum talk about Propellerhead going after the market share of premium small interfaces like Apogee's Duet and RME's Babyface. I personally don't see that, as those interfaces are in a higher price bracket again. Nor do the Balance's published specs point to such an intention; they're plenty good enough for the roles it'll typically fulfil during its working life, but not state-of-the-art. Propellerhead's marketing blurb says the preamps and converters are 'Hi-end' and that's all.

Pressing the Balance's Meter/Tuner button calls up this large floating input level meter and tuner window in Reason 6 and Reason Essentials.Turning to some specifics now, I can report that the Balance's stepped gains are a mixed blessing. On the bright side, the 40dB or so gain range is not bunched up towards the top of the pot's travel. The gain change between detents, though, is very variable, with much bigger jumps in the middle of the range. Also, on the review unit it proved impossible to exactly match gain amounts on both channels when they were sent the same test signal; there was always a discrepancy of between 1 and 2dB. Of course, this can be easily remedied in your DAW, but it's not ideal for stereo recording. Figures for maximum gain are not published anywhere, but an informal comparison to other preamps reveal it's probably not more than 60dB. Interestingly, exactly the same amount of gain appears to be available through the guitar and line inputs as through the mic XLRs, which suggests they all share the same preamp electronics, but in any case noise performance at all gain amounts seems subjectively excellent.

The headphone amp doesn't appear to be particularly powerful. My Sennheiser HD650s required the headphone volume pot to be turned all the way up for a really healthy level, though my HD25s demanded a little less of it.

Finally, a word about the Direct Monitoring option. When engaged, the input level fed to the headphone output appears to be fixed, and curiously, the resulting monitoring level is lower than that which comes back via software (I used Reason 6 during testing). So, when using Direct Monitoring you'll often have to lower your DAW's master fader to get a good balance between the input and the DAW guide track. An additional input/playback balance control would have been welcome here. 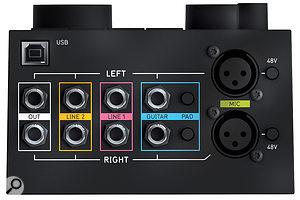 This render of the Balance's back panel shows the unit's stereo outputs, dual stereo line inputs, guitar inputs with pad buttons, and XLR mic inputs with switchable 48V phantom power. At the top left is a USB port to connect the Balance to your computer.

From a purely visual and tactile point of view, it's hard not to admire Propellerhead's Balance. The wedge shape is modern and funky, underlined by the very cool black rubberised finish and red underside. Build quality feels really good — the rear sockets are secured to the casework and the pots are ultra-smooth and positive.

Used in conjunction with Reason, in a typical single-user, laptop-based home-studio scenario, the Balance does everything most users will need it to. It lets you lay down vocals and guitar tracks with the greatest of ease, all backed up with the reassurance of the Clip Safe feature and those other Reason-integration niceties. It takes up very little desk space, and the combination of multiple input sockets and source-selection buttons can help keep your workflow fast and your working environment neat and compact.

Take the Reason-specific features out of the equation, though, as users of other DAWs inevitably will, and the Balance doesn't seem quite so attractive. At its heart, it's a decidedly standard two-in/two-out interface. It's got no MIDI connectivity, so forget sequencing your hardware synths. The single headphone output seems stingy — you'll have to use an additional headphone distribution amp, or at least a splitter, if you want to record a singer in the same room and still monitor proceedings. It's a shame there's no ADAT or S/PDIF expandability too. Yes, you can do a lot with two channels, but any meaningful drum kit recording, or tracking of several musicians at once, is pretty much ruled out. And here are two more gripes: the wedge-shaped design is striking, but it prevents the Balance from fitting in a laptop bag very well. And despite its sporting many features that seem to lend it to use in the educational field, some sort of security anchor is conspicuous by its absence.

It all boils down to your individual requirements. The Balance is not an especially versatile interface, nor one that will grow with you as your recording projects become more complex and you acquire more outboard gear. What it does have, though, is respectable audio performance and build quality, and a focused feature set that will be perfect for many bedroom-based musicians. The inclusion of Reason Essentials, and a Reason 6 upgrade, is clearly part of the value of the product and absolutely cannot be overlooked. And those Reason-specific features are truly unique. Only you can decide whether, on balance, this is the interface for you.

If you only want to match the Balance's basic two-in/two-out design spec, you don't need to spend anything like its asking price. The long-established Tascam US122 MkII is a mere snip at around £110$119 (street price), has MIDI In and Out and is more portable. Spend only a little more on the likes of Focusrite's Scarlett 18i6, at £249$299, and you can comprehensively trounce the Balance's connectivity with eight analogue inputs, S/PDIF and ADAT expandability and MIDI. But as I mentioned elsewhere, nothing else out there has the Balance's Reason-specific features. If you want those then the Balance has no competitors.

The Balance is bundled with Reason Essentials, a Mac OS/Windows DAW. Compared to the full-blown Reason 6 it lacks some of the tastier features and devices, notably audio clip transposition, the compressor/gate section on mixer channels, the instruments Kong, Thor and Malström, and the effects devices Alligator, Pulveriser, The Echo, Neptune and Vocoder BV512. The factory sound bank is smaller too. But it's still a perfectly serviceable DAW, with unlimited audio and instrument tracks and Propellerhead's notably good real-time audio time-stretching.

For those who already own a version of Reason, or Propellerhead's previous DAW, Record, buying the Balance also gets you an upgrade to Reason 6, which by itself would cost €149$169.

One less obvious but very welcome feature of the Balance is its ability to double as an Ignition Key dongle. The Ignition Key is Propellerhead's copy-protection system, and usually comes in the form of a little USB stick, but the Balance has the same functionality built in, and that will make life easier, and use up one less USB socket, for some users.

Propellerhead's first hardware product is a good sounding and nicely designed audio interface with useful Reason-specific features. But make sure its lack of MIDI and expandability suit your needs before depleting your bank balance!