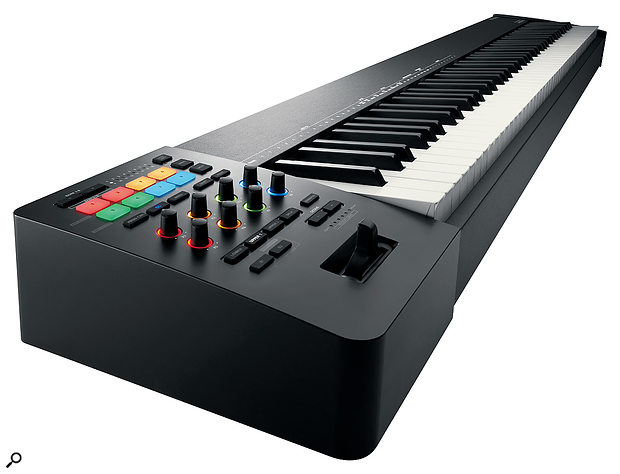 Is Roland's A‑88 MkII controller keyboard the perfect all-rounder?

Roland's exploits in the MIDI controller market go back to the very first years of MIDI itself: in fact they pretty much invented the idea of the controller keyboard separate from the sound source way back in 1984. Using a dedicated master keyboard, in the studio or on stage, makes sense now just as it did then: it can lend a clarity and simplicity to a setup that you don't always get with sound-generating keyboards doing double duty as controllers. Potentially too, a good MIDI controller can fulfil a hub-like organisational role in hardware-based rigs, and perhaps also provide a top-quality playing feel at a lower price than its workstation or stage piano counterparts.

The Roland A‑88 MkII on test here has pretensions in all these areas and a few more besides. It builds on the capabilities of the A‑88 (MkI) that was released in 2012, adding much more scope for real-time control, and a cutting-edge MIDI 2.0 compatibility: certainly it's the first MIDI 2.0 product I've laid hands on.

The 88-note keyboard used here is one of Roland's PHA-4 Standard hammer-actions with ivory-feel keytops and escapement. There's no aftertouch, but it does transmit release velocity. Alongside is a bank of eight knobs and eight velocity-sensitive buttons/pads, both with multi-colour backlights. Two simple switch buttons send various types of MIDI message and supplement the distinctive (some would say notorious) Roland bender that combines X-axis pitch-bend and sprung Y-axis modulation into a single stick.

Three keyboard zones can be established to drive multiple external sound sources via DIN or USB MIDI, and you can store zone and controller configurations into eight 'snapshots' for later recall. Any form of alphanumeric display or menu system is notable by its absence: instead, combinations of button and note presses access parameters, enter numeric values, and so on. To that end the bottom half or so of the keyboard has annotations printed above each note.

On the rear panel there's a USB C socket for connection to a computer instead of the much more familiar square USB B. Happily both a C-to-C and an A-to-C cable come as standard, so almost anyone should be able to get going straight away. More conventionally, a trio of quarter-inch pedal sockets marked Damper, FC1 and FC2 can be flexibly deployed for switch-type or expression pedals, and there's 5-pin DIN MIDI Out and In. A DC input power socket is there too, but as the required adapter is an optional extra Roland obviously assume most people will power via USB from their computer. Reasonable enough, though it was disappointing to discover that the A‑88 MkII does not seem to be able to power from a USB A-to-C cable plugged into a USB mains adapter: hardware-only MIDI people will be forced to cough up for a PSB 1U.

On a more positive note, the A‑88 MkII's USB MIDI is class-compliant for iOS devices, and for macOS you can opt to go class-compliant or use Roland's Advanced driver: I tested both and could not tell apart any aspects of behaviour except for slightly friendlier port naming when using the proprietary driver. There are drivers available for Windows 8.1 and 10 too.

The unit weighs nearly 16.5kg. Being less than 28cm deep it feels quite manageable to lift and lug about, but the design, which has all the controls to the left of the 88-note keyboard, makes it long, at 143cm. The depth of bodywork beneath the keys also make it appear surprisingly chunky overall....