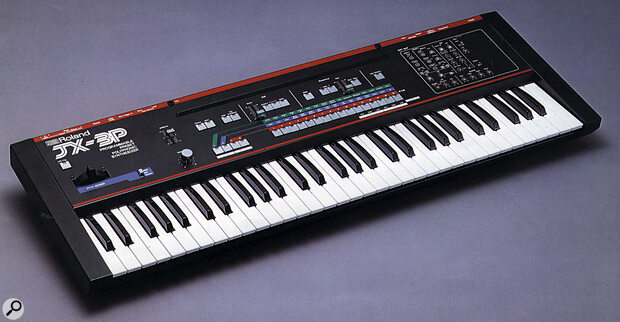 Michael Anthony takes us back to the mid‑eighties, when MIDI was in pre‑school playgroup, and manufacturers built synths that couldn't decide if they were analogue, digital, or both...

When first presented in the mid‑eighties, many claimed that here was a synthesizer with an identity problem. Following hot on the heels of famous cousins, the Jupiter 8 and 6, the JX3P was part of a mad dash by Roland to offset the resounding commercial success of Yamaha's DX7. With its stylish black case, bold primary colours and fire engine red accents, the JX3P was an enigmatic departure.

The JX3P's identity crisis results from it being neither full‑on digital or pure analogue. It's actually a little of each, and as it has turned out, more than enough of both. Equipped with DCOs (Digitally Controlled Oscillators — see the 'DCOs' box later on), a digital interface and the optional PG200 programmer, this synth covered all bases, while still cashing in on the new '80s buzzword — digital. Thirty‑two preset tones and 32 user‑programmable locations, a nifty (if minuscule) onboard sequencer, a somewhat basic MIDI implementation and a built‑in chorus effect rounded out what was in effect an embryonic workstation.

Using a bog‑standard 61‑key, 5‑octave keyboard, the JX3P is devoid of the riot of knobs and sliders common at the time. Resting on a sturdy metal chassis, the control surface is simple and elegant. On the far left‑hand side is the LFO trigger button (normally held down for effect), while just below is the huge, horizontally‑mounted pitch bender (you'll never miss this in a dark room!). To the right of this is the three‑position pitch range switch. At maximum, the 'wide' setting gives a perfect fifth higher or lower, 'mid' provides a total range of plus and minus a major third, while 'narrow' is limited to a major second in either direction. All the buttons employed on the main panel are equipped with status LEDs — a very visual legacy of Roland's Jupiter series.

Continuing right, you find the solitary knob (for volume), and, above this, a shelving‑type Brilliance slider. To the right of this are the Chorus, Mute, Hold and Key Transpose buttons (of which more in a moment). Below these are the four bank select buttons, with 16 tone selection pads to their immediate right. The A and B banks contain preset tones, while C and D are reserved for user creations... a possible 64 tones in all. Above the tone selection pads are the digital editing section and sequencer controls, plus the Tape Memory button. An edit map layout is conveniently pictured on the far right‑hand side. The back panel sports stereo outputs and a headphones jack.

Judging the JX3P on the basis of its rather bland collection of presets would be misleading — or, put another way, Japanese patch design sure has come a long way in the last decade! By utilising the presets as jumping‑off points, however, totally monstrous patches are possible. Some of the string pads the JX3P is capable of would, in my opinion, put even the venerable JP8 to shame. Presets in Bank A include Strings, Organs, Brasses, and Electric Pianos, plus a Clavi, Harpsichord, Vibraphone, Chime, Celesta, Accordion and (a pretty good) Voice. Bank B includes a Violin, Flute, and Oboe, plus Synth Brasses, and wah and distorted guitars.

Editing on the JX3P, even without the optional PG200, is a doddle. Using the front‑panel map provided, it's simply a question of locating the parameter to be adjusted, and then, once you've selected either Group A or B (16 elements each), you simply move the sense slider by the desired amount, or press the corresponding Edit button. The 256‑step editing system allows some very fine adjustments to be made.

The JX3P has 12 DCOs, which allow for a dual oscillator and 6‑note polyphony — pretty much standard for the period. DCOs 1 and 2 are essentially the same, both having 4‑foot, 8‑foot, and 16‑foot voices, along with ramp, pulse and square waveforms, but DCO 2 also includes Noise and Cross Modulation. This last option has two settings, Syncro and Metal: the first synchronises the frequency of DCO 1 to DCO 2, while Metal creates ring modulator effects — useful for the creation of bell and gong tones. The VCF (yes, the filter's voltage‑controlled) can be set to high‑ or low‑pass operation, and you have control over resonance and polarity. The VCA is fairly standard, as is the LFO (offering sine, square and random waveforms); the Chorus can be set to either full on or full off, and the 'EnveRope' is a simple ADSR affair. And yes, it was spelt that way in the brochure!

MIDI implementation in the factory version is extremely basic, especially by today's standards — only Note On/Off, Hold Pedal, Pitch and Program Change commands are recognised. In addition (and like the DX7), the factory model JX3P communicates on MIDI channel 1 only. User tone backup was by tape recorder — again, very much the accepted practice of the day. Unfortunately, SysEx was still in nappies.

A number of interesting innovations were incorporated into the JX3P. In addition to the Chorus and Hold buttons, there's Mute. When engaged, this control will cause the volume of the two octaves below the split point to decrease in level, allowing for an emphasised right‑hand melody. In addition, Key Transpose permits easy transposition to any key.

Despite its limitations when viewed alongside modern synths, the JX3P was and is a thoroughbred powerhouse. Everything from excellent atmospheric pads to rip‑snorting dancey stuff is well within its capabilities. Still popular, even now, it would take more than money for me to part with mine. Much as I love modern synthesizers...they just don't make 'em like they used to!

The JX3P had no sooner hit the streets than those bright sparks at Roland came up with an entire series of very welcome modifications. Some got built into the synth, others became the subject of an EPROM update. If you're lucky enough to own one of these machines, there's no way of knowing if any of these mods were implemented without actually trying each entry in the list below. Perhaps a brand new 'feature' will come to light. Good luck!

For saving/loading tones in the hidden bank.

This differs from standard Poly I mode in that only the last note or notes played receive their natural release length, and is much more suitable where certain types of staccato playing to slow fade effects are required.

For use with original 32 programs:

For use with the hidden bank:

The LEDs light up as sequences play — cute.

THE FOLLOWING TWO MODS WERE PART OF AN EPROM UPDATE

DYNAMICS WHEN PLAYED FROM A TOUCH‑SENSITIVE MODULE

FOR MIDI CHANNEL 3 OPERATION WHILE IN DYNAMICS MODE

DCOs (as they're affectionately known), according to the best information obtained, made their first commercial appearance in the JX3P. Previously, most synths of the period used voltage‑controlled oscillators, or VCOs, notorious for drifting. Both the earlier JP8 and JP6 had 'Tune' buttons for pulling the oscillators back into line from time to time.

Athough the JX3P had fairly conventional sound creation circuits, its one major advantage was digital control on what was essentially a VCO‑type system. This was accomplished with a small digital circuit that actively monitored the oscillators while continually sending corrective voltages to maintain pitch integrity. Once the rear‑mounted Tune adjustment was set, the tuning would stay rock solid.

Almost all popular types of oscillators have functioned under some type of digital control since that time.