Controlling harsh 'ess' and 'tee' sounds in a vocal can be surprisingly challenging, but SPL's technology aims to make it easy.

Harsh vocal tracks with abrasive consonants are a common problem these days. Everyone wants bright vocals with lots of high‑frequency presence, just like the latest Lady Gaga single they heard the other day. On the other hand, too many vocal tracks get recorded with the microphone too close to capture a balanced, even sound picture. With the microphone capsule right at the singer's lips, the recorded sound can be boomy (due to the proximity effect) and harsh at the same time. To make matters even worse, many condenser microphones, especially the more affordable ones manufactured in the Far East, inherently boost the high frequencies, and heavy compression with the attack parameter set only slightly too long can emphasise vocal transients and consonants even more. In short, making your vocals up‑front while retaining the requisite body and smoothness requires special attention.

One might argue that this issue should be tackled at source, through microphone selection, placement and so on, but this advice only helps you so much when you have to mix vocal tracks that have already been recorded under less than perfect conditions! Besides time‑consuming cures like complex volume automation, there are tools tailored exactly for this job: de‑essers. SPL's hardware models are modern classics, and they have now been modelled in software. 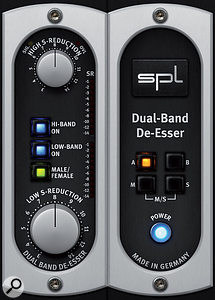 The De‑Esser Collection includes an emulation of the RackPack Dual‑Band De‑Esser, for situations where you need even more control!

Most conventional de‑essers are frequency‑selective compressors. In other words, their side‑chain gets 'tuned' to the sibilant frequencies, so that the compressor's gain reduction is only effective in the frequency band where the problem occurs. This approach works quite well in theory, but in practice there are some obstacles to be cleared. One has to find the most offensive frequency, set the threshold, and then hope the issue remains steady in both the frequency and time domains. Usually, there is a very thin line between a vocal track that is still too harsh, an effective cure, and a dull, nasal, over‑processed lisp.

SPL's approach is different, helping to get rid of some of the shortcomings of traditional de‑essers. First of all, it detects sibilance automatically, with an adaptive bandwith, and the Auto‑Threshold function means that you do not have to worry about less experienced vocalists not keeping a constant microphone distance during their performance. Above all, the method used to achieve sibilance reduction is truly unique: the de‑esser isolates the detected sibilance and adds it back to the audio path with reversed polarity, using cancellation to reduce sibilance in the original. All you have to do is set the desired amount of the effect with the S‑Reduction pot. The Male/Female switch toggles between center frequencies of 6 and 7 kHz, and the plug‑in also has an M/S stereo mode as an addition to the feature set of its hardware predecessor. This is useful for mastering, allowing you to de‑ess a centrally panned vocal without affecting the extremes of the stereo field, or vice versa.

In addition to this Classic De‑Esser plug‑in, SPL's bundle also includes a plug‑in version of their RackPack module, the Dual‑Band De‑Esser. It is based on the same principles, but it offers separate Low and High bands, for even more refined results.

In use, SPL's de‑esser plug‑ins are as straightforward as their hardware counterparts. I would hesitate to employ the over-used phrase "set it and forget it” only for one reason: no matter which tools you use, de‑essing remains a delicate task, where you should listen to the results as closely as possible to avoid any unnatural artifacts. But apart from this caveat, the Classic De‑Esser plug-in delivers maximum results with minimum hassle. The Dual‑Band De‑Esser takes this approach even further, offering a little more control to fine‑tune the equally outstanding results. Both plug‑ins keep those nasty consonants at bay effectively, yet you can really take things to extremes before you have to deal with unwanted side‑effects. The plug‑ins' behaviour effectively broadens the thin line between 'not enough' and 'too much', offering a wider sweet spot with their powerful yet comparatively well-tempered action.

It should be mentioned again that the best de‑esser of all is the one you do not have to use. But should you ever need to repair a vocal track, the SPL De‑Esser Collection most likely will give you outstanding results.

There are is a huge variety of de‑esser plug‑ins available: this is a very common processor, yet it seems to be quite difficult to get it 'right'. The Universal Audio Precision De‑Esser, for the UAD platform, and Waves' Renaissance De‑Esser are among the best (and more expensive) options, whereas the Massey De:Esser covers a lot of ground at a lower price point. Also highly regarded and with their own innovative approaches are Sonnox's SuprEsser and Eiosis' E2 De‑Esser.

To hear some audio examples of the SPL De‑Esser Collection in action on vocals — and other sources! — surf to /sos/jun12/articles/splmedia.htm.

The SPL De‑Esser Collection plug‑ins offer the same qualities as their hardware counterparts, but with all the advantages of software, and at a very competitive price.