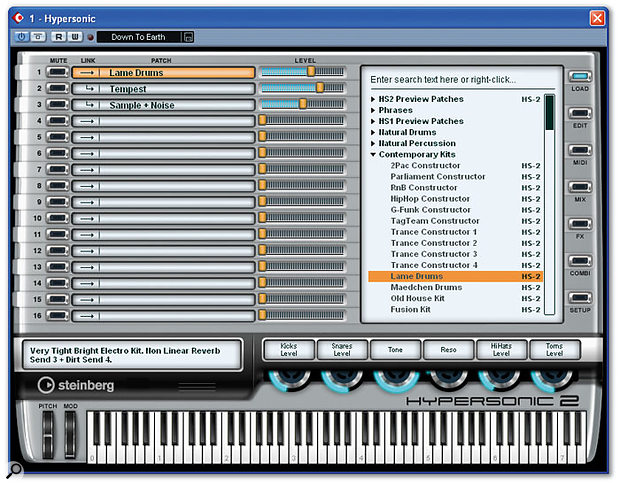 The new version of Steinberg's virtual sound module brings more and better instruments, without sacrificing convenience or ease of use.

The original Hypersonic soft synth was much misunderstood. Some people expected it to be a vast, multi-gigabyte sample library, with every nuance of every instrument captured at a million velocity levels. Instead, it was a creative, easy-to-use workstation with a key quality that is missing from so many soft synths: immediacy. That's not to say it sounded bad, just that it met a different need from BFD or the Vienna Symphonic Library. It didn't offer detailed control over a million parameters, but nor did it take a minute to load every patch, or require a cutting-edge machine to play a single chord. It was, in short, the ideal sketchpad for anyone who wanted to get sounds fast. 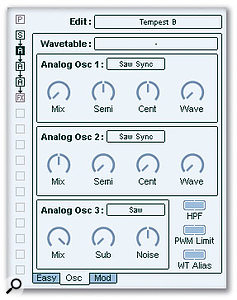 Two years on, Steinberg and developers Wizoo have brought out version 2. Their aim seems to be to build on version 1's strengths, whilst answering those critics who found the original a little bit superficial. In the former category, improvements include a new Hyperphrase arpeggiator and the ability to switch between multis on the fly, for seamless patch changes during live performance. To the latter end, the sound library has grown from 250MB to 1.7GB, and now features lossless data compression for better quality, plus there's greater freedom to edit patches. As before, it's authorised to a Steinberg Key using the Synchrosoft copy-protection system, but this time, no key is supplied, so anyone who doesn't already own one will need to budget for an extra £20. Dongles are always hard to love, but I didn't have any problems authorising mine. 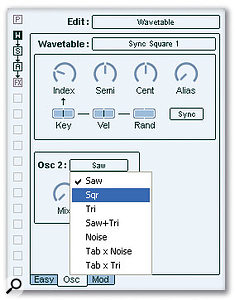 Despite the sixfold increase in the size of its library, there are only about 50 percent more sounds in Hypersonic 2 than there were in version 1. This must be partly down to the decision to abandon lossless compression, but also reflects the fact that the new sounds prioritise quality over quantity. Quite a number of them are actually 'extra large' versions of Hypersonic 1 patches — the same instruments sampled with more velocity layers and less obvious looping. Others are wholly new, and in both cases the improved quality is readily apparent. Out of more than 1800 factory patches, everyone will have their own highlights, but mine are the Contemporary drum kits. These were impressive in version 1, but new patches like Electroquirker and Fat Snap Kit really leap out of the speakers at you. There are plenty of decent new synth sounds, more excellent Hammond patches, a very fat and funky Clavinet, very passable pianos, and the pitched percussion instruments such as vibes and glockenspiels are worthy of mention. Elsewhere, there are lots of new string ensemble patches, but as with all such things, I personally can't see the point — I'd trade the lot for a single decent solo violin. 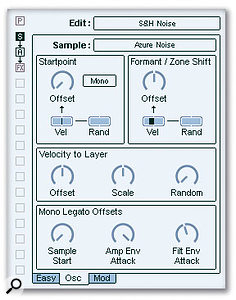 Steinberg say that you can now edit every parameter in a Hypersonic patch, and it's certainly much more malleable than version 1 was. The six Hyperknobs are still pre-assigned to the most important parameters or groups of parameters in a patch, but detailed editing is done by clicking the Edit button at the right. As before, each patch is presented as a series of vertical blocks containing Elements, and clicking on a block brings up that Element for editing. These Elements can either be one of four varieties of synth (a sample-playback synth, an analogue-style synth, an FM synth or a wavetable reader), or an FX unit. In each case, they present at least the most important parameters you'd expect, although the amount of control available doesn't really compare with a more free-form synth. You can't, for instance, select different algorithms in the FM Element, or easily change the keygrouping of samples in a sample-playback synth, while the architecture of the subtractive synth is fixed and fairly simple.

The biggest improvement over version 1 is that you can add and remove Elements from patches, rather than simply muting them. This doesn't make the program into Reaktor, but it does make it realistic to create original patches, providing you're happy to rely upon the supplied samples and wavetables. It would have been nice if the manual had been updated to cover the new editing features, though. It's also a bit odd that you can't click on an empty block to add an Element — you have to click on an existing Element and insert the new one into the chain. The new one always appears before the selected block, so the upshot is that you can add new Elements anywhere but at the end of the chain!

The only real concern I have about Hypersonic 2 has nothing to do with how well it works: it's about the takeover of developers Wizoo by Digidesign. Some will see this as casting doubts on the long-term future for Hypersonic as a Steinberg product, especially since Digi's new free instrument plug-in Xpand! appears to be closely related to it. However, Steinberg are promising a 'full support programme' for Hypersonic 2, and it would be most unfair to judge the product that exists now on the basis of speculation about what might happen down the line. In all important respects, I like Hypersonic 2. I did encounter the odd quirk — for example, on a few of the new drum kits, the Hyperknobs seem to work backwards, and some aspects of the Combi handling are a bit weird — but for the most part, it is very intuitive to use, and the improvements are just what the doctor ordered. Compared to rivals such as IK's Sampletank 2, the sounds tend to be brasher, brighter, and more dependent on effects, which will suit some users better than others, but Hypersonic 's simplicity, low system load and instant patch loading will be big pluses for everyone. I still think it's a shame that there are few decent solo orchestral patches, but this seems to be true of most comparable products as well. As a sketchpad for rock and pop tracks, it's still the best way I know to get sounds together fast — and you'll be surprised at how often you keep them in the finished track!

I'm not sure what the difference is between a Hyperphrase and an ordinary phrase, unless it's just hype, but the upshot is that the Hypersonic arpeggiator has acquired the ability to play phrases as well as the usual up/down patterns. Phrases can be short melodies, rhythmic patterns, whatever you like — over 200 phrases are included, and you can import MIDI files of your own. Personally, I'm not a great user of arpeggiators, but if I was, I think I would really like the one that comes with Hypersonic.

One of the great features of the original Hypersonic was its rapid patch loading, and Steinberg have taken this several steps further in version 2. Patches load instantly even while a song is playing back in your host program, which is fantastic when you want to audition different sounds for a part you've created. Beyond that, it's now also possible to set up Combi Chains for live use. A Combi is, as in any multitimbral synth, a snapshot of all Hypersonic settings, including information on which patches are loaded into which slots. (Hypersonic 2 makes it very easy to layer multiple patches for a single MIDI input, which is great.) 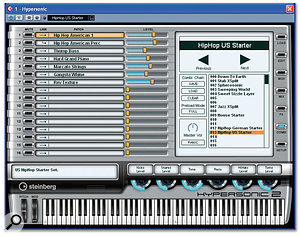 The ability to step through a Combi Chain at the click of a button will be a handy feature for those using Hypersonic live. I was a little confused by the fact that you can't actually load and save Combis from the Combi editing page — the controls are in the Setup display. Instead, the Combi page is devoted to a list containing up to 128 numbered slots. Right-clicking on any slot allows you to assign a Combi to that step in the list, whereupon you can use the Previous and Next arrow keys to step forward or back through the list, with Hypersonic updating all its settings almost instantly. For extra-smooth changes, you can set Hypersonic to preload either the next Combi or all Combis in the chain, although I found it often worked fine without this. A nice touch is that you can leave gaps in the chain, in case you want to insert additional Combis at a later date. Sustained notes are maintained, with the original sounds, over a single change of Combi, but cut off if you change again.

Combi Chains will be a really handy feature for anyone intending to use Hypersonic live, and I can't think of many other workstation-type synths in software that offer a similar feature — indeed, lengthy loading times are an Achilles' heel for many rival products. However, there are a couple of things that puzzled me about the way they are implemented. An orange bar highlights the 'active' slot in the Combi Chain. Double-clicking on another slot makes that slot active instead, and loads the Combi associated with it, but single-clicking simply highlights a slot without loading the Combi or making it active. This means it's easy to let the highlighted bar get out of sync with the active slot, which can get confusing, and I'd have preferred to have the two permanently linked — there's nothing much that can actually be achieved by single-clicking on a slot in any case. I also had difficulty loading my own Combis into slots in the Combi Chain: the factory patches could be selected from the list, but the User Combis I created refused to appear in it. I asked Steinberg about this, and they said no-one else had reported it, so perhaps it's a freak occurrence on my computer.

Hypersonic 2 is a worthwhile update that retains the program's immediacy and ease of use while significantly improving its functionality and adding some great new sounds.