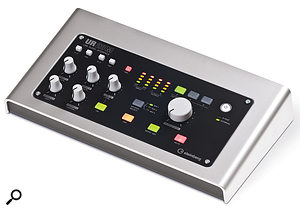 The UR28M desktop audio interface sits in the middle of Steinberg's range, with the simple CI series below it and rackmounted units in USB 2 and Firewire variants above. It could be argued, however, that this is the most versatile interface of the collection, being one of an emerging breed of interfaces that incorporate a monitor controller. This selling point will no doubt win it many friends, in particular those who require multi-channel monitoring capabilities.

In outline, the UR28M boasts two 'combi' mic/line/instrument inputs, two further line inputs, six line outputs and S/PDIF I/O. A stereo two-track input on 3.5mm mini-jack is also included as part of the monitor controller and is routed directly to the first pair of analogue outputs. Two headphone sockets are provided, and can be fed by independent foldback mixes, complete with onboard DSP 'comfort' effects for the performer. No MIDI connections are present, though, and these seem to have fallen by the wayside to reserve back-panel space for audio connections. 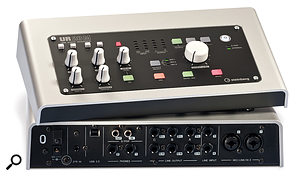 Out of the box, the unit appears to be sturdy, and the controls are positive and durable, as you would expect with hardware from the Yamaha family. The desktop case and large volume knob help to identify the interface as part monitor controller and the top-panel layout is highly intuitive. Rubber feet are installed underneath the case, but the review model unfortunately refused to sit flat on any surface. With one of the feet levitating consistently a few millimetres above the desktop, it quite literally rocked! This is slightly frustrating, and hopefully is a one-off peculiarity related to the construction of the metal base. Power is supplied to the interface by means of a 12V external adaptor.

In addition to the volume knob, the top panel is populated by various illuminated switches for monitor control. These include useful mono mix, mute and dim switches — features common to any quality monitor controller — and others that determine the source being monitored and the active pair(s) of outputs. In the middle, two pairs of meters display input and output levels, with the input meters alternating between pairs 1/2 and 3/4 via software control. Each meter comprises only four LED segments, which is perhaps a little too coarse for accurate level setting during tracking. Still, such compromises are to be expected at this price, especially when you consider the other controls that have also been packed into the case.

The left-hand side of the panel houses controls for the first two inputs. A high-impedance switch is provided for instrument-level signals, as well as a pad switch, which reduces input sensitivity by 26dB. Phantom power is applied globally to inputs 1 and 2, and 60dB of gain is available to each preamp. Additionally, a high-pass filter can be applied to each input, but this function has to be enabled in the software control panel. Helpfully, though, the filter cutoff frequency can be varied in preset increments between 40 and 120Hz. At the bottom left of the panel there are volume pots for the two headphone outputs. 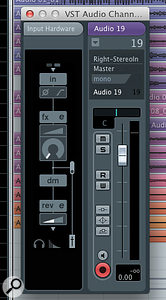 The Input Hardware panel in Cubase AI. The graphic on the left-hand side is used to control hardware parameters, including the foldback DSP effects.

Installation involves a relatively large number of steps, and with tea at the ready I first took the opportunity to download the most recent 'Tools for UR28M' package from the Steinberg web site (which includes the driver, documentation files and all software apart from Cubase). Additionally, a firmware update was required to resolve an issue with switching sensitivity level on line inputs 3/4. This is also available on the support page of the web site and is straightforward to apply.

Steinberg's entry-level Cubase AI 6 is bundled with the UR28M for recording duties. It provides up to 32 audio tracks, 48 MIDI tracks and a range of basic native effects plug-ins. Installation itself is fairly painless, but users must register and then authenticate the software with a code from the 'eLicenser Control Center' within 28 days, to ensure permanent functionality. This process is somewhat fiddly, but worthwhile, since AI boasts a fairly respectable feature set and can be easily expanded with freeware VST plug-ins.

Aside from the Cubase stock effects, two additional VST plug-ins are included, and these are software versions of the hardware DSP effects that can be added to foldback mixes. 'REV-X' is a reverb with a sophisticated array of parameters that has been ported from Yamaha's digital mixer range, and the 'Sweet Spot Morphing Channel Strip' sports a compressor, three-band equaliser and a not-so-catchy name. Before use, the plug-ins have to be activated by launching the installed 'eLicenser Control Center' application and entering the serial number supplied on a licence card.

Keep It In The Family 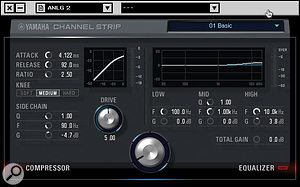 The Sweet Spot Morphing Channel Strip processor in DSP form. The large control in the centre is used to 'morph' the compressor and three-band EQ parameters simultaneously.

To put the UR28M through its paces, I recorded a variety of instruments using Cubase AI. Before the recording could start, some Cubase audio preferences needed to be set in order to enable inputs and outputs and to set the buffer size. I also enabled direct monitoring in the audio preferences, so the zero-latency monitoring feature could be utilised.

In use, the preamps supply plenty of gain, smoothly and with no apparent noise. The mains hum I've experienced using my clip-on condenser mics with some audio interfaces that have external power supplies was not present here, but a grounding screw is supplied on the rear panel, for tackling such problems if they ever occur.

When recording, input and foldback settings are most easily accessed via the edit button at the top of the Inspector panel in Cubase. The relevant Input Hardware panel is displayed in a mixer view and features a slightly perplexing graphic with unlabelled controls. The top section is straightforward, with controls for polarity and the high-pass filter. The next section relates to the Sweet Spot processor that can be added to the monitor mix. This shapes the dynamics and tone of the inputs being monitored, and a 'morphing' feature may be used to apply preset compression and EQ combinations. The two Sweet Spot controls on the Input Hardware panel correspond to the compressor Drive control (to apply more or less compression) and the Morph control. While the former control might prove useful once other compression parameters have been established, the latter is fairly counter-productive, applying relatively heavy and random processing, often without the visual feedback of the plug-in window. It's a strange choice of controls, then, since any such 'morphing' will undo any previous compression and EQ settings!

Towards the bottom of the Input Hardware panel are controls for adding reverb to the monitor mix. Pressing the edit button opens the REV-X window, where reverb time and a wealth of other parameters are available. Three main algorithms are featured — Room, Plate and Hall — and they add a pleasing, bright ambience to the foldback mix. This reverb sounds very nice, and the alternative VST version can be put to good use during mixing sessions to supplement the more basic effects bundled with Cubase AI.

With the Input Hardware parameters set, recording can take place. Everything works very well and without faltering even at relatively small buffer sizes. The ability to add EQ, dynamics processing and reverb to the foldback mix certainly helps the performer to feel happy about what they're hearing, and similar settings can subsequently be recalled during the mix using the plug-in versions of Sweet Spot and Rev-X. 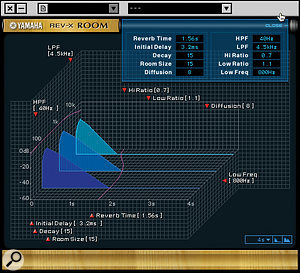 The REV-X DSP reverb effect that can also be added to the foldback mixes. The VST versions of these two processors share the same graphical user interface.

Free from the clutches of Cubase AI, the interface operates incredibly smoothly. A virtual mixer within the dspMixFX control software is used to establish foldback mixes, add the DSP effects to the monitor mix and manipulate levels and panning. Operation is an absolute joy, as all the hardware controls are in familiar positions, unlike the cryptic Input Hardware panel of Cubase. The setup window is accessed by a single click, with all parameters displayed on a single page; again, this is more user-friendly than its multi-tabbed Cubase counterpart.

Any parameters set on the mixer are retained until they are subsequently modified, including levels, pan and the reverb, EQ and compression. With these settings stored, and in the absence of a computer, the UR28M becomes a handy compact mixer for rehearsal with instruments and a microphone or two. A snapshot function is also available to store and recall mixer parameters in the manner of a fully fledged digital mixing console, but these need to be specified using the software and don't have a hardware control. It's a neat feature, nonetheless. 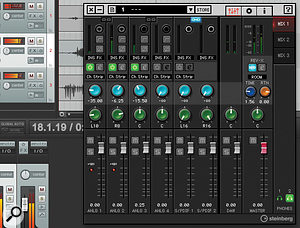 The intuitive dspMixFx software is used for controlling the UR28M in the absence of Cubase, and is shown here working with Reaper.

The monitor-control specifications of the UR28M are impressive for the price. The unit's three output pairs put it on a level with dedicated monitor controllers, and the two-track input proves very handy for routing sound from portable devices to monitor speakers, particularly when there is no computer connected. When working with more than one pair of outputs, the control software allows the user to either link the volume of the output pairs or modify them independently using the volume knob. This can be handy in a domestic 5.1 setting, to attenuate the rear surround channels, for example. The process involves simply pressing button A, B or C to select the output pair, and then manipulating the volume control. Unfortunately, there is no quick way of muting pairs of output channels on the hardware when all pairs are active. This may constitute a minor quibble to some, but may prove a bigger problem to those who work with multi-channel mixes who may wish to A-B front and rear speaker pairs in isolation.

All in all, the UR28M represents great value for money and will appeal to those who require a good complement of analogue outputs to facilitate surround formats or to A-B between multiple pairs of studio monitors. What it lacks in sheer number of analogue inputs and MIDI connectivity, it easily makes up for with its range of monitor controls and stand-alone operation capabilities. Latency-free foldback effects, the bundled VST plug-ins and the intuitive dspMixFx software make the package all the more impressive.

Research reveals only one alternative to the UR28M in respect of specification and price. The Fast Track C400 from M-Audio is slightly less expensive than the Steinberg and is bus powered. It won't accept external power to function as a stand-alone device, but it does include the MIDI connections the Steinberg lacks. Analogue inputs share a similar specification, but fewer (four) analogue outputs on the M-Audio render it unsuitable for 5.1 monitoring. It only has one headphone output, compared to the two on the Steinberg, but does feature more detailed hardware level meters. Like the Steinberg unit, it has DSP effects for use in monitor mixes, and S/PDIF digital connections are also present.

The UR28M is a well-built, versatile unit that ticks many boxes in respect of its various roles, and does so at a very attractive price. Highly recommended.