Can a valve mic for under £200 really deliver the goods? We put this one up against AKG’s premium C12VR to find out...

The SubZero mic brand is exclusive to UK retailers Gear4Music, and most of their models seem to be about offering visually similar alternatives to classic microphones, but that cost less than the VAT you’d expect to pay on the originals. They also claim to try to match the originals on sound quality, although that’s pretty optimistic given the price! The SZ-V12C reviewed here is clearly inspired by AKG’s classic C12, or possibly the C12VR. Indeed, other than the blue paintwork, the chrome grille and a heavy chromed locking ring at the base, it bears a strong resemblance to my own C12VR, which I am using here for comparison purposes. 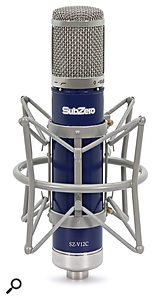 How it stacks up on sound remains to be seen, but the valve circuitry and the presence of the transformer output stage promise some degree of tonal warmth. The standard of finish certainly looks impressive, with brass being used for the machined capsule parts and body shell. This particular model comes in a wooden box packed into an aluminium camera case, complete with power supply, long multi-pin cable and elastic suspension shockmount.

Taking a peek inside reveals a Chinese-style chassis supporting three printed circuit boards populated with discrete components. The very high-impedance connections from the capsule are made with what appears to be PTFE coated wire, and these terminate on bushed pins, also coated with PTFE to avoid current leakage through the circuit board material itself. The necessary components are then wired directly to these pins, which is a good approach.

A hand-selected Russian 6072A dual-triode valve is mounted base side up in a ceramic base, and supported at the cap end by a resilient, heat-resistant gasket. Below this is a fully metal-encased transformer, with the cables linking the transformer to the circuit boards being routed inside the box section’s metal support pillars to provide screening. The 32mm capsule has two centre-terminated, 6mm gold sputtered mylar diaphragms and is almost certainly of Chinese origin.

A polished, dual-layer nickel grille protects the capsule, and below this are mini toggle switches for an 80Hz, first-order low-cut filter and a 10dB pad. (On my C12VR the roll-off has two options, both switched from the PSU.) A nine-position pattern switch on the TSP-1 power supply offers all the options from omni to figure-of-eight via several widths of cardioid. A seven-pin cable connects the mic to the PSU, and the signal outlet on the PSU is a standard balanced XLR. Mains comes in on an IEC socket, and there’s a power switch and recessed voltage selector for 110V/230V operation. 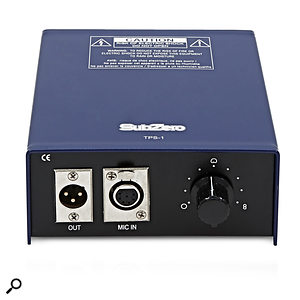 The included power supply offers a range of nine different polar patterns, from omnidirectional to figure of eight.

SubZero quote a frequency response of 20Hz to 20kHz (±3dB); the included graph shows a gently rising response above 2kHz, peaking at around 12Hz. The exact shape of the curve in the higher registers varies a little depending on the pattern selected, but this general rising characteristic remains consistent. A maximum SPL of 136dB (or 146dB with the pad engaged) is specified along with an equivalent noise level of 17dB, which again is likely to change slightly with the different patterns. Sensitivity is -38dB. In normal use no circuit noise was evident.

Tested with both mics set to cardioid mode, the SubZero SZ-V12C and AKG C12VR produce very different results. I’ve always found that, though the C12VR has a warm and silky sound, it always needs some low end rolling off and some top adding to get a vocal sound I like. It’s also worked better for female rather than male vocals on past sessions, as without EQ it can make male voices sound rather thick and dull.

The SZ-V12C, by contrast, injects a hint of low-end tube warmth bolstered by the output transformer but partnered with a much more conventional-sounding high end. On my own voice I detected a little harshness at around 2.7kHz, but that was easily tamed using a small amount of EQ cut at the same frequency. Its highs certainly aren’t as refined-sounding as those of more sophisticated microphones, and there isn’t quite that same sense of airiness and space, but given its price the SZ-V12C puts in an impressive performance and it responds well to EQ if you need to sweeten the sound.

The SZ-V12C also does a pretty good job on acoustic guitar, capturing just a slightly brighter version of how I hear the instrument while playing it, though being critical there’s still a hint of brashness that needs EQ to tame it. The other polar patterns retain a reasonable tonal consistency, allowing for changes in the proximity effects and the amount of room ambience picked up in the omni and figure-of-eight modes.

Whatever this mic looks like and whatever the manufacturers claim for it, its almost giveaway price simply must be taken into consideration when evaluating it. Off-hand I can’t think of any other multi-pattern tube mic that comes in below £200. While the SZ-V12C doesn’t deliver boutique performance, it still stacks up well against other lower-cost microphones, most of which still cost significantly more, and that classic styling might just win you over. It also comes both with decent accessories and lovely packaging, neither of which should be taken for granted at this almost ludicrously low price.

The SZ-V12C may not sound exactly like the classics, but for the asking price — and given the bundled accessories — it represents excellent value.