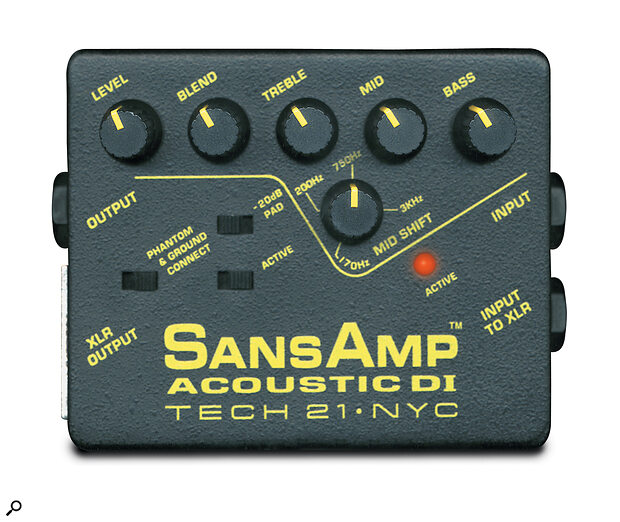 There's no doubt that the best way to record an acoustic guitar is to mike it up using a high‑quality capacitor mic, but this isn't always practical when trying to maintain separation from other instruments. On the other hand, piezo pickup systems are easy to DI but tend to produce a poor imitation of the true sound of the instrument. Tech 21's Sansamp Acoustic DI is designed to address this problem by reshaping the output signal from a typical piezo pickup system (active or passive) to make it sound more natural.

Housed in the familiar black die‑cast case, the Sansamp Acoustic DI can be powered from a 9V battery or from phantom power arriving at the XLR output. There are two high‑impedance input jacks available, the first of which, labelled Input, will usually feed both the jack and XLR outputs through the sound‑shaping circuitry. However, if a jack is inserted into the second input, labelled Input To XLR, the buffered signal from the second jack will be fed directly to the XLR output, while the processed signal from the first input will only feed the unbalanced output. This configuration allows an insert point to be implemented between the unbalanced output and the Input To XLR input if required.

The Active switch functions as a bypass, though the unit still acts as an active buffer in bypass mode. The Phantom & Ground Connect switch makes the unit ready to accept external phantom power in one position, while acting as a ground lift in the other. A 20dB output pad is also available for use with console mic preamps.

The circuitry of this box is all analogue and includes a section that purports to model the effects of a tube microphone. This applies soft limiting to the signal peaks and also rounds out the sound to some extent — there's no way to adjust the degree of compression or saturation, but the Blend control adjusts the mix of original sound and 'mic‑modelled' sound to taste. The EQ section has Bass and Treble controls with a ±12dB range, while the Mid control can be swept between 170Hz and 3.5kHz with ±16dB gain available. Level adjusts the output gain, and a red LED shows when the unit is active.

Compared against the unprocessed sound of the pickup on my acoustic guitar, the Acoustic DI dramatically changed the tone, removing much of the boxiness of the original signal, though a certain amount of careful setting up was needed to get the best results — in particular, I found that moving the Blend control too far towards the mic‑modelling position resulted in a rather dull sound. However, with a little Mid control cut and some fine tuning of the Bass and Treble controls, I soon arrived at a setting that was a close approximation to the acoustic sound of the guitar — full without being boxy and clear at the high end without becoming too scratchy. I've never yet recorded directly from my acoustic guitar, but having heard the results that can be achieved going via the Tech 21 Sansamp Acoustic DI, I'd be more than willing to give it a try. Paul White