Q. How can I easily match levels on MP3s? 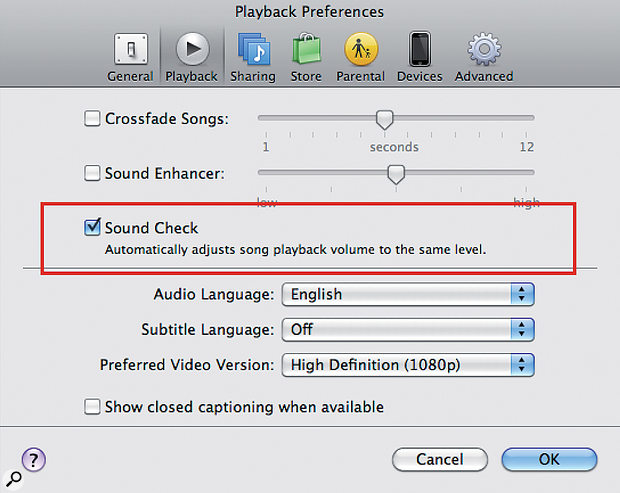 While the 'loudness wars' still rage on (for the time being, at least), you can easily level out your MP3s with iTunes' surprisingly effective Sound Check feature. That's assuming you don't have the patience to adjust the levels of your favourite tracks manually using a DAW, of course!

When I listen to MP3s on a PC or Apple Mac, they are all at different levels, with the louder ones seeming twice as loud as the quietest ones.

Back in the days of tape and vinyl, you set your own recording level on the tape deck. So if you recorded three different tracks to tape you could get the levels similar; listening to a 'mix tape' was way more consistent than ripping CDs to MP3, where different tracks have different volumes.Has anyone made a piece of software that adjusts the volume level of tracks so they all match? Surely this can't be that hard? And surely I am not the only guy on earth that finds this annoying? (Please note, however, I do not mean I want a compressor or limiter that zaps the dynamic range!)

SOS Technical Editor Hugh Robjohns replies: The 'mix tape' solution is still available of course: you can transfer tracks manually, perhaps using a DAW, adjusting levels as you go. But few of us are probably prepared to invest that kind of time and care these days!

The issue of varying loudness is a serious one, and something that afflicts many different media outlets. The film industry tried to address this issue a while ago with some success, for example, and the broadcast TV industry has recently introduced a new standard that is currently being adopted worldwide and which involves a reliable and standardised way of assessing and quantifying loudness. The broadcast radio industry will follow in a year or two's time, and these initiatives will finally end the 'loudness wars'. The standard in question here is the ITU-R BS.1770, and the various local adaptations such as EBU R-128, ATSC-A/85 and the CALM Act in the USA.

The metering system that underpins these standards is already widely available and I would urge anyone involved in mixing music or involved in audio production to familiarise themselves with this system as soon as they can. There is no doubt that this is the future.

Returning to your question of software solutions, the easiest option, if you are using iTunes and/or iOS-based players, is to switch on the 'Sound Check' function. This doesn't quite conform to the BS.1770 standard, but it is very close and works extremely well. Essentially, it analyses the loudness of each track in the library and writes metadata into the file header which documents the playback level needed to achieve a perceived loudness equivalent to -16dBFS; this level being chosen to accommodate wide dynamic range material without clipping. Since the Sound Check function is only storing a 'level offset' instruction, the actual stored audio data isn't altered in any way, and the replay process is directly equivalent to you manually adjusting the playback level, so it is entirely non-destructive. The result is that every track ends up with a similar perceived loudness, which is exactly what you want. An alternative that I've not tried, but which I've seen recommended, is a program called Mp3Gain Pro (www.mp3gain-pro.com). This is capable of batch-processing MP3 files to establish a common loudness across all files, but I believe it does so via a destructive manipulation of the original file data.