Q. What is making my 'kicksnare' mic distort? 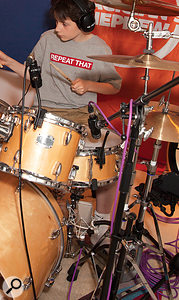 When recording drums in small spaces, a sensitive mic such as the Neumann TLM103 can put out very high levels that not all mic preamps can cope with. If your mic and preamp lack a pad facility, an in-line XLR attenuator can be used to avoid overloading the preamp.

A big thanks for Mike Senior's very useful Session Notes article in the January 2019 issue (https://sosm.ag/session-notes-0119) about achieving a great drum sound in small spaces. I copied the complete mic setup from this article and the recordings I made in my isolation booth sounded wonderful! However, I couldn't use the Neumann TLM103 as my 'kicksnare' mic, as it couldn't handle the sound level produced by the drummer. Even with zero gain at the preamp this mic produced a distorted signal. What was I doing wrong?

SOS Technical Editor Hugh Robjohns replies: Drums certainly produce very big transients, so close-miking them is often a challenge for a lot of mics. However, the Neumann TLM103 is rated to handle 138dB SPL with just 0.5 percent distortion, which is pretty darn impressive — so while it is possible that the mic was being overloaded, I think it unlikely in this situation. A more likely culprit is that your mic preamp is overloading because, at 21mV/Pa, the TLM103 is a pretty sensitive mic. In a close-mic situation on a loud kit that means the mic is going to generate a signal level pretty close to 0dBu — in other words, line level — and many mic preamps don't expect that, and cannot cope with it.

In situations like this, an easy solution (although theoretically not the best, from a noise perspective) is to switch in the pad in the microphone. However, the TLM103 doesn't have an in‑built pad. The next-best option is to engage the pad on the mic preamp. You haven't said what preamp you're using, but I'm guessing you'd already have tried that if your preamp had one.

So the final option is to invest in an in-line XLR mic attenuator, and connect that between the mic and preamp. In-line attenuators come in a variety of values, but -20dB is normally enough. Shure, Audio‑Technica and various other manufacturers make switchable attenuators, typically with three different settings, and these are very versatile, but fixed-value attenuators are available for far less. If using such an attenuator makes distortion go away, you'll know it was the preamp that was overloading. While I strongly suspect this was the case, it's not the only possibility.

Audio-Technica make this adjustable in-line attenuator.If the distortion continues in spite of the level into the preamp now being much lower, then it must be the mic that was overloading. Now, while it might have been because the transient peak was over 140dB SPL, I suspect you'd know if the drums were that loud because your ears would be rather sore, which you haven't mentioned! And if the problem was that the mic was broken or poorly in some way, I suspect you'd find it distorted in other situations too, which you also haven't mentioned.

There is one other possibility to consider: your preamp has a feeble phantom power supply — one which is unable to make available sufficient current or voltage to the microphone. Under normal circumstances I'd say that wasn't very likely either, because the TLM103 has a very modest phantom current requirement (3mA). But if you're running a lot of current-thirsty mics off the same preamp, as one often is when recording drums, or if you have one or more faulty mic cables in the rig, then the phantom supply could be being dragged down far enough to cause problems.

To check if this is the reason, you could substitute the preamp with a different one, or use an external phantom supply. But perhaps a more practical route if you have a multimeter would be to measure the phantom voltages between pins 1-3 and 1-2 on the mic XLR. If you unplug the TLM103 (but leave all the others mics connected and powered up) the voltages at the preamp's XLR should be identical and between 44 and 52 Volts (the spec calls for 48 ±4 Volts). If you then reconnect the TLM103 and check again inside the mic cable XLR at the mic end, it should read about 27V (the reduction being due to the current drawn by the mic). If you get significantly different figures then the phantom supply isn't up to scratch. But, as I say above, I strongly suspect that your preamp was just being overloaded, and that investing in some in-line mic attenuators would be a good idea.

SOS contributor Mike Senior adds: Thank you for your kind words about that article! It was an unusual session, but it turned out well, and I'm glad it has helped you improve your own recordings. I won't attempt to rehash any of the great information that Hugh's already provided. He's basically said everything I'd have said, only better, as usual... The only thing I'll add is to confirm that I did indeed encounter no problems at all with distortion on the kicksnare mic on this specific session, and we were recording through an Audient ASP880 mic preamp, I seem to remember, which as Hugh's review (in SOS August 2014: www.soundonsound.com/reviews/audient-asp880) pointed out, has masses of headroom — more than enough to cope with the output of a TLM103 in a very noisy place!