One of the best features of TDM-based Pro Tools systems is the negligible latency, or input-to-output delay, while recording. So what's the best way to deal with this problem if you have only an LE system?

When working on music projects I normally use my main Pro Tools system, which is an HD2 Accel system with a 192 I/O interface. However, I also do a lot of work on LE systems as these are what many of my clients have. Often, these are used for broadcast production, and latency issues don't usually rear their ugly heads when using Pro Tools in this way, but recently I was asked by one of my clients to fly out to Northern Ireland to track and overdub some music tracks in a studio overlooking Carlingford Lough near Newry. With us flying out, taking my HD system was not a practical solution, but I have an 002R with a Focusrite Octopre in a 3U soft case, and together with some other bits and pieces loaded into my suitcase, I just got it within the 32kg single item limit. 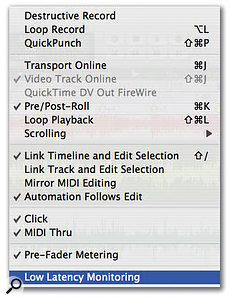 I knew that there were some latency issues with LE systems, and sure enough, when we came to the first overdub there were problems. The singer was having some tuning difficulties, so I put Pro Tools into Low Latency Monitoring mode — and hey presto, the vocalist could sing in tune again. I was feeding the performer's headphones from an aux buss and hadn't noticed that in Low Latency mode, Pro Tools mutes the aux sends of any track in Record; I didn't become aware of this until later on in the session, when another performer complained they couldn't hear themselves. So I looked into what was going on and workarounds to keep the session going smoothly, and I thought I would share the results of my investigations with you this month.

Latency And Why It Happens

Pro Tool LE uses the processor in the computer for all audio processing, playback and recording, and to make it work reliably, audio data needs to be buffered on the way in and the way out, imposing a small amount of audio delay, or latency, in the system. The amount of latency is related to the H/W Buffer Size: the larger the buffer size, the longer the delay. 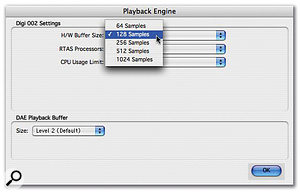 The 002 and 002R offer buffer sizes down to 64 samples.With the 002 and 002R interfaces, however, Pro Tools LE offers a Low Latency mode. This can be found at the bottom of the Options menu on Pro Tools 7 LE. When Low Latency mode is enabled, it will only work on tracks that have an input routed direct from an interface input, and not for tracks routed via an aux track, for example. If you do a Bounce to Disk whilst Low Latency mode is enabled then any aux and Instrument tracks will be ignored and so won't feature in that bounce. All plug-ins on any record-enabled track are bypassed in Low Latency mode, and any record-enabled tracks will not register on the master meters. Only analogue outputs 1/2 are available in low-latency monitoring mode, which is why Pro Tools muted my headphone feed on the session I was describing. Also, it doesn't work via the digital outputs, so you can't monitor via the digital outputs while recording in the low-latency monitoring mode.

The M Box and M Box 2, meanwhile, enable you to monitor the input signals directly whilst recording, so you can hear them without any latency. The Mix knob on the front of the M Box or M Box 2 enables you to adjust the balance of direct input signal to playback signals from Pro Tools. You'll need to mute the tracks you're recording on in Pro Tools, otherwise you'll hear both the direct signal and the delayed signal as recorded into Pro Tools.

Rich Tozzoli's book is an excellent handbook for anyone wanting work in surround with Pro Tools, whether for music, broadcast or film, and is full of pictures, screenshots and practical examples of real projects to help you to get stuck in very quickly.

It begins with a brief overview of how we have got to today's range of surround formats, starting with Walt Disney's Fantasia from back in 1938! Rich goes through the requirements for a surround monitoring system, including speaker placement, the ITU standard, calibration and bass management, and then looks at the best way to record for a surround project. He gives practical outlines and examples using both traditional mics and more specialised ones like the Soundfield and Holophone mic systems.

He then shows how to prepare a Pro Tools Session to mix in surround, including setting up surround paths using the I/O Setup window, routing to the interface outputs, the different ways of surround panning with either Digidesign plug-ins or the Waves 360 plug-ins, and the difference between the sub and LFE channels. He also looks at how the different control surfaces available, both Digidesign and third-party, work in a surround facility, and outlines different multi-channel mixing concepts using case studies, explaining how to use the Centre and LFE channels, and how to work 'to picture'. The final case study in this section is a look at how a DVD is designed, and explains the 'data rate and bit budget' calculations that go into the design and authoring of a DVD.

Rich covers in detail a broad range of surround-capable plug-ins including the Waves 360 Bundle, Digidesign's Revibe and Sony's Oxford Dynamics, as well as software available for surround encoding and external hardware processors like the Lexicon 960L and the TC Electronics M6000 units. He goes through the current range of surround delivery formats like DVD-Video, SACD and DVD-Audio, the Dolby range from Pro Logic to Dolby EX and the DTS system, before taking a look at an example of how our wonderful surround mixes are heard at home, albeit with a top-end consumer receiver. Chapter 11, the final chapter, looks at other applications for surround like computer games and commercials.

The DVD that comes with the book includes a number of examples, of which the first 11 are short clips showing extracts and elements of surround mixes, while the last three are complete mixes. The DVD will play on any surround receiver with a Dolby AC3 decoder, and with its accompanying written notes, is much more than an afterthought. The examples are an excellent resource, which reinforce the very practical tone that Rich takes through this entire book. I would recommend this book to everyone who works, or plans to work in surround audio projects.

Now that I've outlined the limitations of the zero and low-latency modes for Pro Tools LE, depending on which interface you are using, let's look at a range of workarounds you can use so you can run smooth sessions with happy artists.

This works without having to resort to using the zero or low-latency monitoring modes and so should be the first choice for a solution. Go to Playback Engine menu item in Setups and adjust the buffer size as low as possible; 128 samples is a good compromise, but you will need a very fast computer and hard drive for this. The low limit for the options for hardware buffer size are set by which hardware interface you have. The 002 and 002R can work down to 64 samples (on my Apple Powerbook G4 1.67GHz machine with my 002R running Pro Tools 7.0cs5 I was able to run at 64 samples on a fair-sized Session) and the M Box 2 will go down to 128 samples, but the original M Box's lower limit is only 256 samples, which for most situations won't be enough. This has to do with the performance of the USB buss, so for low buffer sizes to work well you need a fast computer and a Firewire interface. However if you don't have either or both of these don't despair, as there are other workarounds to go at.

When you're using the 002/002R Low Latency recording mode, plug-ins and aux sends on the tracks you're recording are disabled.

This is much faster than even the 64-sample buffer size, but the down sides are that you cannot use any outputs other than analogue outputs 1/2, so headphone feeds fed via an aux buss from say outputs 7/8 aren't possible. Also, remember that plug-ins on tracks you're monitoring and recording will be bypassed as well. However, if you can work with the headphones having the same mix as your control-room monitors and don't mind bypassing plug-ins on the track you are recording on, the latency is seriously low in this mode.

This eliminates latency altogether by routing the input signals direct to the outputs in the analogue domain, so short-circuiting the path via Pro Tools. However, you need to note that you will hear both the input direct and the signal coming back from Pro Tools in this mode, unless you mute any track you are recording on to. One snag with this is that when you come to try to overdub sections, the artist will need to hear what they have already laid down on the track. The workaround for this is to mute the record track at the drop-in point, but you will have to do this manually, as mute automation is suspended when you record-enable a track.

Taking the M Box's zero-latency concept somewhat further, you can use a separate mixer to handle monitoring. If you're using stand-alone mic preamps, these can be split to both the Pro Tools interface and the headphone monitor, or if you're using the mixer's mic preamps, you can put Pro Tools 'in line' like we used to do with tape-based multitrack machines. This workaround is nowhere as portable as any of the others but does give you a flexible zero-latency solution.

On balance, reducing the H/W Buffer Size is the best way of getting around the latency problem, as you can do proper drop-ins, and still have the plug-ins and aux sends active on your record tracks, so the musicians can hear reverbs and so on whilst tracking. You do need to keep your track counts down and keep the use of plug-ins to a minimum, but it is the best way to work providing you have a fast computer and fast drives. The other workarounds work up to a point, but the process of doing drop-ins is much harder as the artist will not be able to hear what they have already laid down unless you are very adept in the use of the mute buttons. So if latency is a recurring annoyance then it may be time to upgrade your computer to something a lot faster.