Pro Tools 8 comes bundled with a new suite of AIR plug‑ins, some of which are more powerful than they appear. We expose their hidden depths...

When Pro Tools 8 was launched, it contained so many changes and new features that one of its most valuable additions has perhaps not had the attention it deserved. I'm talking about the suite of 20 plug‑ins from Digidesign's Advanced Instrument Research group. These were developed as built‑in effects for instrument plug‑ins such as Velvet and Strike, but are now included free with Pro Tools as RTAS plug‑ins we can all enjoy without having to use (or buy!) any of these instruments. For this month's workshop, then, I'm going to turn the spotlight onto some of these new AIR plug‑ins and, in particular, at applications for them that aren't obvious or well documented.

Distortion is a generic plug‑in that offers a variety of flavours of distortion. We are all used to using distortion effects on guitars and some keyboard patches to give them more 'bite' in a mix, but what's less obvious is that this plug‑in is great for fattening up drum sounds. 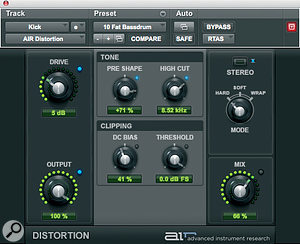 Distortion: not just for guitars! In the presets menu are two patches called 'Fat Bassdrum' and 'Fat Snaredrum', which really do live up to their names! With reasonable amounts of drive, they are great for thickening an anaemic drum sound, and for more extreme effects, try turning the drive right up. You can end up with the kick drum sounding like a distorted bass guitar, producing distinct notes with different pitches, depending on how hard the drummer has hit the pedal.

Lo‑Fi is another generic plug‑in 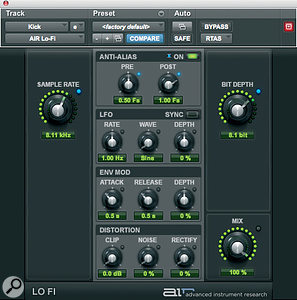 Lo‑Fi is a great tool for teaching the basics of digital audio., although the new AIR version is different from the familiar Digidesign Lo‑Fi plug‑in of yore. I don't use this plug‑in as it was designed — as you will know if you read this column regularly, I am not actually a fan of distortion — but it is brilliant in an educational context for demonstrating to students the effects of reducing sample rate and bit depth, and of not having anti‑aliasing filters. 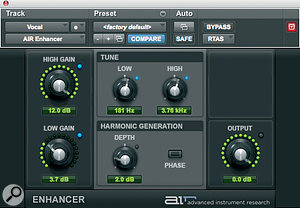 To avoid harshness, try using the Enhancer plug‑in with a high setting for High Gain and a low Depth. is similar in function to the classic Aphex Aural Exciter, generating new high‑frequency harmonics to brighten a dull source sound. Unlike conventional EQ, this type of plug‑in can brighten sounds that have relatively little high‑frequency content in the first place. Although there are Low Gain and High Gain controls, I don't use the former much, except occasionally to warm up a vocal: to my ears it is just a low‑frequency shelving EQ, and doesn't seem to generate harmonics (the manual is very vague on this). Be careful tweaking the High Gain, as, depending on the settings of the other controls, you can end up creating lots of harmonics in a relatively narrow band. If, like me, you want to be able to broaden the effect to help brighten the source signal over a wider range of frequencies, try raising the High Gain almost to maximum but keeping the Depth control well down. I find that I now get on much better with this little plug‑in than I do with the official Aphex plug‑in, but be aware that some of the factory presets are a little over the top: they give you a good start, though, and once you have backed them off a bit, they work well. Do remember that this is a 'distortion' plug‑in, so if you overdo it, things will just sound distorted rather than enhanced.

Get Your Ducks In A Row 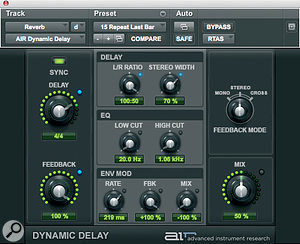 Dynamic Delay is made special by the built‑in envelope follower, which can be used to generate ducking effects.

The new Dynamic Delay is a very interesting plug‑in with a lot of potential. At heart, it's a delay that can be sync'ed up to the session tempo — nothing unusual in that — but what makes this plug‑in different is the inclusion of an envelope follower that can shape or duck the delay output. To get a handle on how this works in practice, try 'Repeat Last Bar' in the list of presets. This uses a long delay to repeat each bar, but the output is 'ducked' under the input signal and only emerges when the vocal (or whatever) stops. The result is that you get the complete last bar repeated at the end of each vocal phrase. Doing this using a conventional delay effect requires painstaking automation of the delay send.

There is a nice little GUI feature of this plug‑in, such that when it's set to sync to host tempo, the Delay control becomes calibrated in musical intervals, from 8/4 (two bars) down to a 16th note (semiquaver). This makes it so much easier to set up a rhythmic delay. There is also an L/R ratio control, which allows you to adjust the ratio between the delay in the left and right channels. Obviously 100:50 means that the delay in the left channel is twice as long as the delay in the right channel, but you don't have to stick to precise multiples, so you can set it anywhere from 100:50 to 50:50 (the same delay in both channels), through to 50:100.

This is how the 'Repeat Last Bar' preset works: a negative Mix setting means that the envelope follower will push the wet/dry mix over to dry while there is a signal passing through the plug‑in. Once the signal has stopped (as in the end of a vocal line), there is no signal from the envelope follower and so the wet/dry mix goes wet and we hear the last phrase repeated. 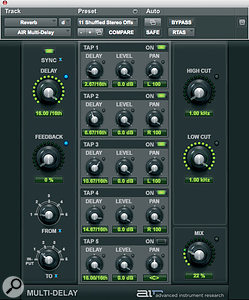 The second AIR delay plug‑in is different from many other multi‑tap delay plug‑ins, in that it has 'From' and 'To' controls. Used with the Feedback control, these enable very complex repeats to be set up.

When you start working with this plug‑in, you might find it takes a while to get used to how the delays are displayed: when sync is active, the amount of delay is shown in multiples of 16th notes. For instance, '1.00/6' represents a semiquaver delay, while '16.00/16' is a semibreve or a full bar in 4/4 time. With sync off, delay is displayed in seconds and milliseconds; up to four seconds' delay is available.

There are five delay lines, each with its own delay time, level and pan settings. This alone makes Multi‑Delay pretty flexible, but the key to its uniqueness lies in the From and To controls. These make it possible to feed the output of one of the five delay lines into the input of one of the others, or back into the plug‑in's input stage so it feeds back into all the delays.

For example, if you had Tap 1 set to a crotchet (quarter‑note) repeat and Tap 2 set to a semiquaver (half‑note) repeat, you could set the From control to pick up the output from Tap 1 and the To control to the input of Tap 2, so that the delayed output from Tap 1 has a semiquaver echo added to it. This is a simple example, and obviously you can set up much more complex sequences, especially when you route back to the global input. However, you do need to be aware that if the delay time of the To tap is greater than that of the From tap, you will get a 'feed forward' scenario rather than feedback, resulting in only one repeat.

I wish Digidesign had added a feedback control for each tap, but even so, this plug‑in has got loads of potential. For instance, rather than using a stereo delay, try using a mono delay and either lay it on top of its source in the stereo image, or pan it the other way for a 'separation' effect. Or, for even more complex sounds, try pairing this plug‑in with a modulation plug‑in either before or after — or what about one of the distortion effects? There really is no end to the possibilities on offer.

Next month, we'll complete our look at the AIR plug‑ins with hot tips on some of the new modulation effects.