We round up the latest from the Apple Developers' Conference and the implications for Mac musicians.

In this month's Apple Notes, wouldn't it have been great to read about a whole string of amazing innovations, as announced at June's Worldwide Developers' Conference? 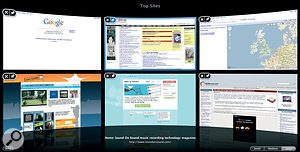 Safari's new Top Sites feature.Well, yes, but, as intimated in last month's column, the announcements were more evolutionary than the revolutionary ideas flying around the rumour sites leading up to the conference. There was no netbook, and no pro application upgrades, as have been seen in the past. Instead, Phil Schiller (Senior VP of Worldwide Product Marketing) delivered a presentation structured to whip the adoring hordes of developers into a frenzy (despite the lack of surprises or show‑stoppers), each part of which underlined the mature business strategy of the new Apple.

So it is that we now have Safari 4, out of beta and trailed as "the world's fastest and most innovative browser”, running Javascript eight times faster than Internet Explorer 8 and three times faster than Firefox 3. It certainly seems snappier in general usage, and I particularly like the 'Top Sites' feature, which gives a visual preview of frequently visited or favourite pages.

Cat Out Of Bag

Snow Leopard was heavily trailed, and is due in September. The focus is on performance and efficiency rather than new features, but the following key points are promised:

Snow Leopard will cost $29, keen pricing reflecting the fact that it's seen as an essential upgrade for Leopard users. Tiger users will be recommended to upgrade to Snow Leopard (bypassing Leopard) by purchasing the 'Box Set' with a special version of Snow Leopard, iLife 09 and iWork 09. For those who purchased a Mac or XServe after June 8th, 2009, Apple have a 'Hardware Up to date' offer valid until December 26th, 2009.

The iPhone featured heavily in the presentation, in the absence of major hardware announcements. The new iPhone 3GS takes video as well as stills and has a three‑megapixel camera. While I'm sure that the camera takes pictures that are more than adequate for a device of this nature, the cynic in me congratulates Apple for insisting on three megapixels for this release, and saving five megapixels for a later version!

Released at the same time, iPhone OS 3.0, as found in the iPhone 3GS, allows owners of older handsets access to most of the features found in the new phone, barring those that require the new hardware. There is a huge list of these features, but one or two are worthy of note. MonoAudio is intended for those with hearing loss in one ear and makes the output of each earbud identical, so it's also ideal for those couples you see on trains and buses who are so in love they only need one set of headphones! Find My Phone and Remote Wipe will be great for people like me who are always losing their phone (Remote Wipe can clear personal data in the case of theft or irretrievable loss). This version of the OS also finally supports stereo audio and audio transport remote control over Bluetooth. Some early adopters complained that the upgrade was deleting their music library, but the 'fix' for this issue is to sync the phone (after upgrade) without music, then sync the music library.

Of Apple's computer hardware, only the notebook range has been upgraded. Key points to note are that the 13‑inch 'unibody' MacBook is now rebranded as a MacBook Pro; all three MacBook Pros (13‑inch, 15‑inch and 17‑inch) have Firewire 800 (compatible with Firewire 400) and long-life built‑in batteries, making them environmentally more friendly; the 15‑inch MacBook Pro no longer has an ExpressCard/34 slot, so that's now only available on the 17‑inch; and both the 13‑inch and 15‑inch MacBook Pros have an SD card slot: handy for photos and video but not a lot of use to musicians at the moment. The white MacBook remains available, and is now extremely good value in terms of performance for the money, especially if upgraded with more RAM and a larger drive.

And no, Logic Pro 9 was not announced! Well, what did you expect? Those who have noticed a warning dialogue when opening Garageband 5 (iLife 09) files in Logic 8.0.2 that refers to a new version can only hope that an upgrade to allow the stomp boxes and Podcasting features of GarageBand to integrate with Logic Pro is on the way.

The confusing warning dialogue shown by Logic 8.0.2 when opening GarageBand 5 files.Perhaps some of us are getting a little twitchy, having seen Pro Tools and Cubase leapfrog Logic Pro with advanced time and pitch capabilities...

So Apple's image as an innovator remains for now, but the business model has become a calculated combination of drip feeding and 'staying ahead of the curve'. New Mac Pros are always an exciting announcement (if you don't get out much), but to be honest, $29 for a significant improvement in performance is going to feel a whole lot better than forking out for a brand‑new machine.

Cool Applications Of The Month

MonoLingual: Available from http://monolingual.sourceforge.net, this is a really useful application for stripping away excess fat from your Mac, as it removes languages you are unlikely to use. One word of caution: it can mess up the auto‑update feature of Microsoft Office, but this is remedied by reinstalling Office after using MonoLingual. 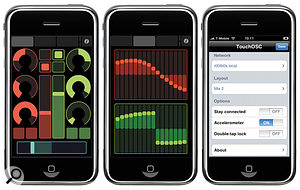 TouchOSC: This is an iPhone app (from the App Store or http://hexler.net that allows you to use the iPhone as a remote control for OSCulator, a communication environment for connecting a variety of hardware controllers to music and video software, available from http://www.osculator.net. A simple example of what you can do is controlling mix faders in Logic Pro using your iPhone as the remote. You can also hook up Wii Remotes (or achieve similar results using the motion sensor in your iPhone) for gesture‑based control of your favourite software.