Learn how to import and combine Environment layers to create new MIDI facilities for your projects.

In this month's column, we're going to look at expanding Logic's MIDI processing capabilities by importing and combining Environments. Although this may seem daunting, it's actually quite straightforward — but first you need to know how to do some basic cabling, and for this 'training session', we're going to start with Logic's templates...

From the left-hand side, choose the Compose tab and then, from the right-hand column, choose the Electronic option. Logic loads a new session with a selection of software instruments and other content perfect for creating electronic music. Go to the Classic Acid Bass track and record-enable it. Now move across to the floating window and, from the top menu, choose the 'MIDI Effects On' option and hit Play. Play some notes on your keyboard and you'll hear a 16th-note arpeggiator effect added to your playing. Now, in the second menu down, choose '1/16th — Up 2 octaves'. Again, hit play in Logic and hold down a chord. You should now hear a two-octave, 16th-note arpeggiator effect. 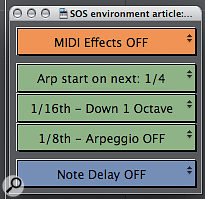 The floating window from the Electronic template, created with Logic's Environment to control a range of MIDI effects.

Importing the MIDI Effects layer into a new Logic session will allow us to use it in different sessions at our convenience. Here's how:

The Import layer function in Logic makes it easy to import Environment layers from other projects into your current project.

We can also recreate the same convenient visual interface for the MIDI Effects processing that Logic's original Electronic Template had. In the 'MIDI Effects' layer, Control-click on the empty background and, from the menu, choose Protect Positions and Hide Cables. Next, to create the appropriate window type, Control-click again and choose Frameless Floating Window.

Finish the job by resizing the window so that it is the size of the small box that held the menus before, and then move down the background of the MIDI Effects layer until the MIDI effects drop-down menus are in view. The setup is now complete and the MIDI Effects should work as before.

Now that you know how to import an Environment, you can cast your net further afield. My favourite web sites for free third-party Environments are www.swiftkick.com and www.logicprohelp.com. In the forum section of the latter, there is a section called 'Logic & Mainstage Templates & Environment', which contains all sorts of useful free goodies that generous forum members have created and shared. Search the forum for the 'Scale Remapper' Environment, created by Jordito. Once you have found it, download it. This Environment transforms any notes that you play on your keyboard so that they conform to a specific scale in a chosen key signature. This is particularly useful if you're not an accomplished keyboard player, and even if you are, it can force you to write using different modes/keys than you're used to. 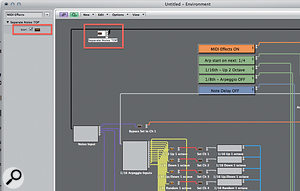 Highlight the Separate Notes TOP object and, in the Inspector, tick the Icon box. This ensures that this object will be available as a destination when connecting objects across layers.

We'll now have a look at how the MIDI Effects and the Scale Remapper Environment layers can be combined together inside a single project.