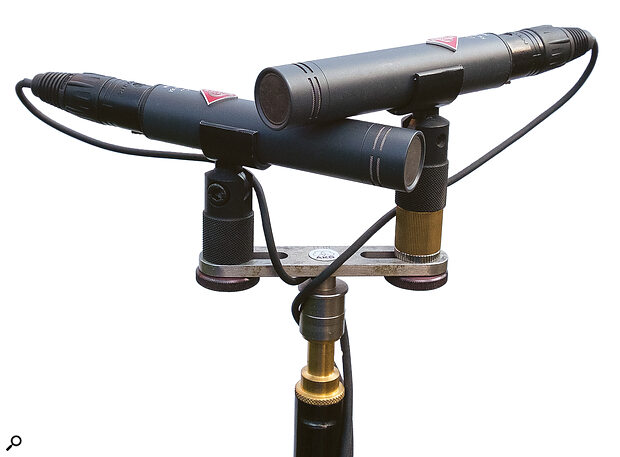 We introduce a little‑known mic configuration that has some unique advantages over more familiar stereo arrays.

There are myriad stereo microphone arrays, each with unique strengths and weaknesses. If you have only a pair of cardioid mics, your options are limited to ‘coincident X‑Y cardioids’ or some form of near‑spaced array such as DIN, NOS or ORTF; the last of these is the best‑known and most popular. In this article, I‘ll suggest an alternative which offers some worthwhile advantages. I can’t claim the credit for it: I first came across this idea in the mid‑’80s, but was reminded of it recently when searching for something else entirely in my Studio Sound magazine archive. As far as I know, the late, great Michael Gerzon (of Ambisonics fame) first described this arrangement in print, and he credited Tony Faulkner. But as Tony already has a couple of eponymous mic arrays, I’m taking the liberty of naming this one for Michael!

Before describing this ‘Gerzon array’, let’s consider some pros and cons of other cardioid stereo arrays. When Alan Blumlein was developing his ideas for stereophonic sound in the 1930s, he noted that to achieve accurate imaging across the stereo soundstage, the signals reproduced by the speakers should differ only in their relative amplitudes, not their phase or timing. To achieve this, he developed the concept of the coincident mic array, in which directional capsules are mounted directly above one another (ensuring phase coincidence in the horizontal plane), and angled so that their relative sensitivities vary with the sound source’s angle of incidence. In other words, a sound source off to one side of the mic array’s central axis will be picked up at a greater level by one mic than the other, simply because of the degree of off‑axis rejection afforded by the mics’ polar patterns, thereby generating the required inter‑channel amplitude difference.

An X‑Y coincident array formed of two cardioid mics at a 90‑degree mutual angle is the aural equivalent of a fish‑eye lens, producing a ‘stereo recording angle’ (the angle around the front of the mic array, across which sounds appear fully left or right when auditioned on speakers) of about 196 degrees. This means the array has to be positioned very close to the orchestra or choir in order for the recording to fill the reproduced sound stage. Coincident X‑Y cardioids typically need to be placed more or less directly above the conductor’s head, inevitably generating a very close, relatively dry sound, and giving an exaggerated imbalance between the orchestral players near the centre and edges of the ensemble, and between those at the front and back. Not surprisingly, then, X‑Y cardioids don’t deliver a naturally pleasing and balanced sound. On the upside, the stereo imaging is well focused and precise, as with all coincident arrays, and mono compatibility is rock solid.