How And When To Use Multiband Compression 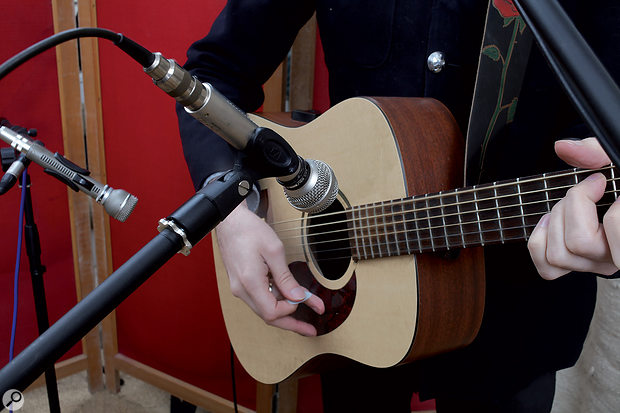 Getting a little too much pick noise from a guitar part? Such spikiness is just the sort of problem a multiband compressor can alleviate.

Multiband compressors offer unique advantages over their broadband cousins — but they also present some perilous pitfalls for the unwary.

For a long time, multiband compression was viewed primarily as a mastering tool, but its increasing availability in recent years has led more and more people to explore using it earlier in the production process. These days, in fact, I find myself using it much more often for mix processing than for mastering applications, so in this article I'd like to explain what all the fuss is about by sharing some of my favourite mixdown tricks for multiband compression.

One application is where a sound's high-frequency transients are becoming overbearing. I frequently encounter acoustic-guitar recordings with excessively sharp pick noises, for instance, and it's also common to hear unpleasant stick-contact spikes on cymbals where overhead mics are placed directly above them pointing downwards. In both these cases, the transients primarily manifest themselves as fleeting high-frequency level peaks, and you can target these using a multiband compressor's uppermost band. You'll need to use a very fast attack time in that band, of course, and a fast release time also makes sense so that the compression doesn't duck high-frequency events immediately following each transient.

Once you've set your threshold so that gain-reduction is triggering reliably just on the transients, you can then refine the compression ratio to rein them in to taste. I'll regularly use ratios upwards of 5:1 here, and you may need gain-reduction values of 12dB or more in extreme cases to smooth extra-prickly recordings, especially if you're generally boosting the brightness of your guitar or drum kit for mixing purposes. This might seem like over-processing, but in practice the speed of the gain reduction is so quick that it won't be anything like as audible as you'd expect. A critical setting in this scenario, however, is the crossover point between the compressed band and the remainder of the spectrum: set it too high and you won't be able to reduce the subjective spikiness enough, because some of each transient will be making its way past the compression; set it too low, and gain-pumping artifacts from the heavy processing are more likely to impinge on the main body of the instrument's timbre.

Similar settings can be useful for enhancing the high-frequency density of vocal recordings in chart-targeted mixes — you know, that super-breathy, saturated brightness you hear on most mainstream pop productions. Real-world vocal recordings inevitably deliver less high-frequency energy on some vowel sounds than others, so one of the secrets to getting consistently upfront and intimate vocal tones is evening out the dynamics of the high-frequency band in general. In this instance, though, a lower ratio and lower threshold are more appropriate, because you're trying to reduce the dynamic range overall, rather than just nailing down fleeting peaks.

I typically start with the ratio around 2:1, and aim for perhaps 6dB of gain reduction in the first instance. Of course, this setting will effectively dull the timbre, so you'll need to apply some make-up gain to restore the subjective brightness. Again, I'd suggest using pretty fast time constants, because there's usually little advantage in letting high-frequency transients sneak past the processing — they'll make the vocal feel fatiguing, because the band's make-up gain will effectively be brightening them. I'd normally choose a crossover point around 10kHz for this application, which is low enough for general-purpose high-frequency enhancement, but at the same time avoids unduly enhancing the sibilance region. 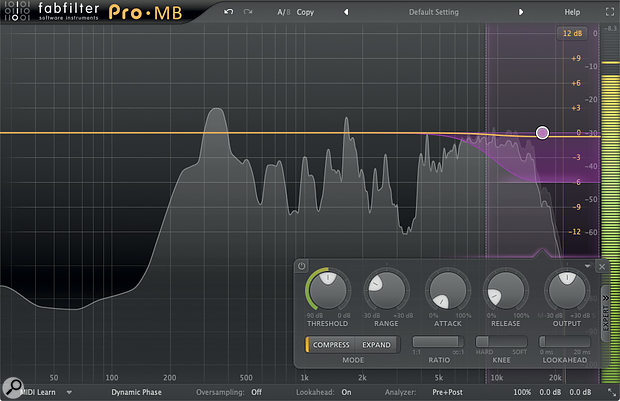 Multiband compression can solve a host of problems when mixing vocals. Here, FabFilter's Pro MB is deployed as a de-esser.

Speaking of sibilance, many de-essing plug‑ins are effectively just specialised multiband compressor setups, compressing either the upper spectrum as a whole or some upper mid-range band around 8kHz or so. In essence, this kind of de-essing is no harder to apply than the aforementioned transient-reduction patch, but the crossover frequencies between the processed and unprocessed bands can be a little fiddlier to set up.

One trick here is to mute the processed band for setup purposes, because that makes it easier to check whether it's catching all the offending sibilance, and then to narrow the processed band's frequency bandwidth as far as you can without letting any harsh 's' frequencies through. If you're careful with this part of the setup, you're less likely to get unmusical lisping or gain-pumping artifacts with the processing once you unmute the processing band. Mind you, it's rare in my experience to find an over-sibilant vocal that you can process satisfactorily with set-and-forget processing, even when you're using multiband processing like this, so I normally end up automating the processing threshold occasionally to make sure the band's gain-reduction remains in the sweet spot.

Where I most often see people coming unstuck with multiband compression at mixdown is where they seem determined to use all the bands all of the time...

A little further down the spectrum, I hear plenty of vocal and electric-guitar recordings that suffer from intermittent harshness. With vocals, the abrasive tonal edge often coincides with a rise in pitch register, an increase in performance intensity, a shift into 'chest voice' from 'head voice', or a specific vowel sound — or indeed all of those things at once! Whatever the cause, though, simple EQ cuts are unlikely to provide a workable remedy, because upper mid-range cuts that are strong enough to tame the most piercing syllables will make the rest of the track sound muffled and reticent. For overdriven electric guitars, differences in the high mid-range harmonic density can be triggered by changes in chord voicing — an open-fifth power chord won't result in nearly as much distortion complexity as, say, a diminished-seventh chord, because of the way the distortion processing reacts to the input signal. Again, if you try to cut the upper mids from the harshest-sounding chords with normal EQ, the others will likely lose their bite. 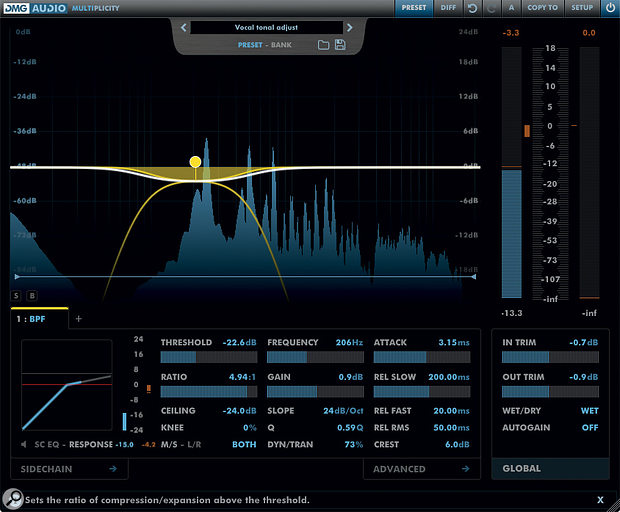 Proximity effect can be useful when recording vocals, but if a singer moves around during a take, it can make the low end inconsistent. Here, a multiband compressor is set to even things out.

In both these events, a fairly narrow-band compression setup targeted at the most harsh-sounding region has a lot to recommend it. In a sense, the processing is very similar to a de-essing scheme, and the only real challenge is homing in with sufficient accuracy on the offending frequency range. I find spectrum analysers quite good as diagnosis tools here, but if you don't have anything sufficiently high-resolution on hand, then a narrow EQ band swept through the mid-range spectrum can also help. (That said, I'd recommend using a cut rather than a boost, because almost every mid-range frequency can start sounding harsh if you boost it with enough EQ, so it's easy to end up chasing your tail that way!)

In some cases, particularly with vocals, more than one frequency region may be contributing abrasive moments, in which case you may need to use two bands of processing to get sufficient tonal smoothing without unacceptable loss of presence to the vocal tone as a whole. Bear in mind, though, that you may not be able to get enough control in that scenario unless your particular multiband processor has reasonably steep crossover slopes between its bands. (I'd be looking for something upwards of 18dB/octave for that kind of forensic work.)

At The Low End

There are plenty of applications for multiband compression in the lower half of the spectrum too. The most common for me is when dealing with a singer who moves around a lot while singing into a cardioid vocal mic, because the amount of proximity-effect bass boost on their voice can vary quite a lot as a result. Setting the low band of a multiband compressor to control the sub-300Hz region quite assertively can really help make the timbre easier to balance within the mix. I'd normally use a ratio of around 3:1 here, and with a reasonably short release time too, so that any particularly full-bodied notes don't make those following them sound thin. However, where I would advise caution here is with the attack time, because if you set it too fast, you'll often lose some of the vocal's sense of urgency and immediacy — it can end up sounding emotionally 'squashed' somehow. I'll happily set upwards of 50ms of attack time in this application, for instance.

Another common situation where I often reach for LF-specific compression is when dealing with upright bass and electric bass-amp recordings. Miking either of those instruments in a project studio environment can result in your capturing a room resonance around the 70Hz region (corresponding to typical domestic ceiling heights of 2-2.5 metres). This resonance will respond differently to notes of different pitches and durations, resulting in low-frequency level inconsistencies. With upright basses, there may be an additional resonance around that region from the instrument's main cavity air resonance. Setting a multiband compressor's low-frequency band to control the bass spectrum below about 100Hz can help rein in the low-end of any notes which happen to excite the unwanted resonance.

Just because the bands are there, doesn't mean you have to use them all. It's best to identify the specific problem you're trying to solve, and then use as few bands as possible to reach the desired result.

Even with DI'd bass, though, I've sometimes had problems with up-tempo songs where the player taps their right-hand fingers on the strings while playing (to maintain their sense of rhythm during performance), thereby generating powerful sub-bass thuds that can potentially overpower the kick-drum in the balance. Again, a low-frequency compression setting can help address this at mixdown, ducking the sub-bass thuds while leaving the fundamentals of the proper bass notes comparatively unscathed.

Hopefully you'll be able to make good use of some of these tricks — I can certainly vouch that they've bailed me out frequently in the past! Before you get too carried away, though, I'd like to make one final general point for working with multiband compressors. You'll notice that almost all the settings I've suggested here use only one processing band, and in a very targeted way. Where I most often see people coming unstuck with multiband compression at mixdown is where they seem determined to use all the bands all of the time, just because they're there! (Unfortunately, the factory presets in most plug‑ins seem to follow a similar trend.) If you keep your mind very clearly focused on what the spectral problem is, and then use the minimum number of bands required to solve it, you're much more likely to get transparent results without unflattering sonic side‑effects.