How To Make It In K-Pop 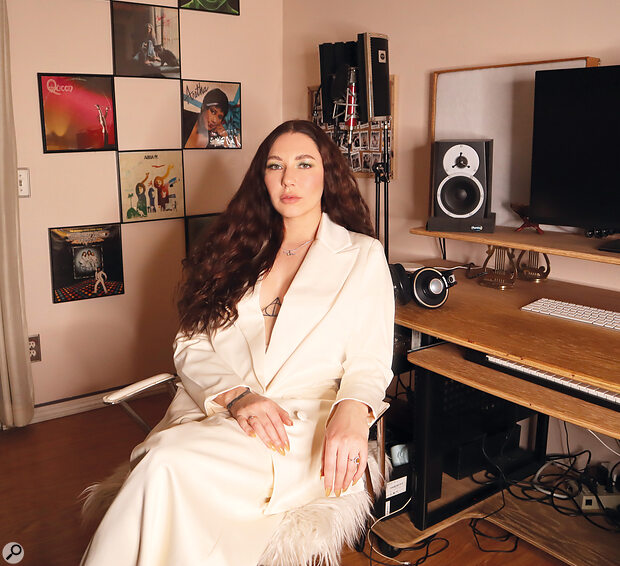 Alina Smith has worked with Far East artists such as Aisha, ITZY, Rocket Girls, and many more.

Successful songwriters and producers explain how to adapt your skills to the massive Far Eastern market.

I’ll never forget the moment my publisher told me they were thinking of dropping me — my heart plummeting into my toes, the cool air of an autumn Nashville afternoon seeping through the office window and wrapping around my throat like a vice. Dropped? But I had only signed my deal the year before. Surely, I could have a little more time? Unfortunately, my publisher told me, my time was just about up. I had been signed for a year and a half, and if in about six months I didn’t start getting ‘cuts’ (industry jargon for having your song recorded by major‑label artists) they wouldn’t be able to afford to keep me on, no matter how much they liked my songs.

It was 2015, and I had only recently moved my family to Nashville from Las Vegas, a decision largely fuelled by the fact that, after a decade of creating music for free, I now had income from my publishing deal. Needless to say, the prospect of losing it had me panicking, my palms sweating as I imagined the career I’d been working toward since I was 17 collapsing into dust. Every clock suddenly seemed to tick louder, as if reminding me of my six‑month deadline.

I remember calling my best friend, songwriter and artist Elli Moore, immediately after that meeting. “What am I gonna do?” I asked her in a voice like sandpaper. I didn’t have to explain my predicament: every Nashville writer knows it takes years to become established in country music, sometimes even decades. And all I had was six months.

“You need a new angle,” Elli told me firmly. “They said you should get cuts. But they didn’t say they had to be in country.” Her words sparked a distant memory. Back in 2009, I met a well‑known Japanese producer, Shin Murayama, on Craigslist of all places (ah, 2009). I was barely out of my teens then and as green as they come, but Shin liked my voice and writing and sent me some tracks to topline — to write lyrics and melody to. The very first song we had worked on had gotten cut by the J‑pop artist Aisha, featuring DMC from the group Run‑DMC. And although I hadn’t worked on J‑pop since then, the memory felt like a lightbulb sparking in my mind.

“We should write some songs for the Asian market!” I had blurted to Elli.

Elli, 18 at the time and adventurous, agreed easily. We didn’t know it then, but that little moment would completely change the trajectory of both of our careers. 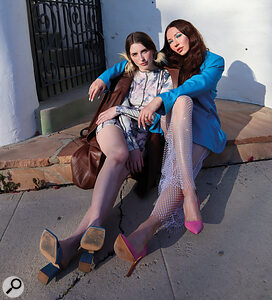 Elli Moore (left) and Alina Smith are production duo LYRE.Being in Nashville, neither of us had relationships in the Asian song market, so we did what any sensible writer would do: we used Facebook to look for collaborators who did. Within that six‑month window, Elli and I would get several cuts in the K‑ and J‑pop markets with bands like Red Velvet and RAINZ, as well as several ‘holds’ — labels seriously considering our songs for their artists’ projects. I still chuckle as I recall my publishers telling me they were proud of me... even if they did have to look up what K‑pop was. At the end of the six months, I was told the publishing company was picking up my option. My deal was saved.

That night, as Elli and I celebrated, we chatted about possible next steps. Now that my deal was continuing for at least another year, I could return to writing country. The thing is: I didn’t want to. We realised then that what started as a last‑ditch plan to rescue me from career death had transformed into something much bigger. We had both fallen in love with the creativity of writing and producing Asian pop music. And we would follow that love to Los Angeles, transforming Elli and Alina into LYRE: the writing/production team we’re known as today.

Coming from Nashville, where most production, at least at the demo stage, revolves around guitar and simple percussion, one of the most shocking changes I’ve experienced as I began producing Asian pop was just how much production there was. If a Western song usually has three sections — verse, chorus, and pre‑chorus — which often stay within the same groove and use the same chord progression, an Asian‑market song will likely have five or six, swinging between chords and grooves like an enthusiastic aerialist. It’s a lot of parts to produce.

Posing an extra challenge, there are often more production elements in these tracks than there would be in a Western‑market song. On ‘Rocket Girls’ by the Mando‑pop band of the same name, I recall having over 50 stems just in the drop: several layers of Serum synths, growling and sawing at the listener, multiple loops racketeering the top end, while a busy kick pattern pounded underNeyath it all. In the US, less is often more. In Asian music: more is more. 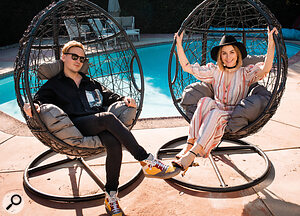 Melanie Fontana and her husband and collaborator, producer Lindgren Schulz.

“There can be no awkward silences in K‑pop,” songwriter Melanie Fontana Schulz shares as we chat over Zoom, confirming that this theory applies not only to the track but to the topline as well. “The average Asian music consumer likes to karaoke, to go out and sing these songs.” Melanie, who’s written hit records in the Asian market, from BTS’s ‘Boy With Luv’ to TWICE’s ‘I Can’t Stop Me’ continues: “It gets awkward if there’s a break. It’s the best piece of advice I’ve gotten about writing K‑pop,” she adds with a chuckle, explaining she first heard this from an A&R. “Now I make sure to get as many hooks in there as I can. The first verse will 100 percent be different than the second. The second pre‑chorus will have a layer of background vocals that wasn’t in the first pre. There might even be two different hooks. It’s all about re‑combination and lots of parts.”

My partner Elli and I celebrated when we first heard that the K‑pop band ITZY were cutting our song ‘Mafia In The Morning’ (simply called ‘Mafia’ then). But our joy became tinged with confusion as the band’s label, JYP, began asking us for revision after revision on melody, especially on the pre‑chorus. “They wanted it to be perfect,” Elli laughs now — an easy feat seeing how the song has garnered over a hundred million plays in barely a month. “But it was definitely an adjustment to do so many revisions when we’re used to getting only a few from the US and European labels we work with.”

LinNeya Södahl: The Korean language has a lot more syllables. So, you need more syllables to be able to say anything at all. And that’s why you need to write quicker rhythms in your melody. 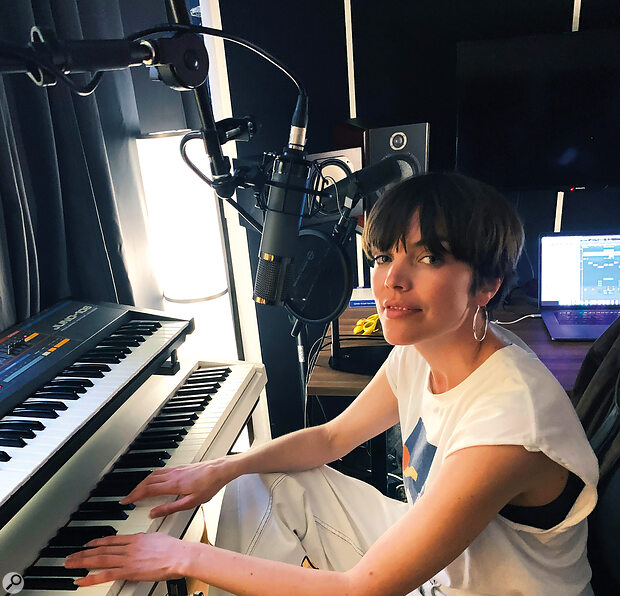 It turns out, our experience is quite common in the Asian market. “Melody is king,” says LinNeya Södahl, better known by her artist name Nea, a songwriter for TWICE and TAEYEON. “It’s very important to have strong hooks. But there are also some specificities to writing for this market. For example, several A&Rs told me you shouldn’t have long notes. The Korean language has a lot more syllables. So, you need more syllables to be able to say anything at all. And that’s why you need to write quicker rhythms in your melody.” 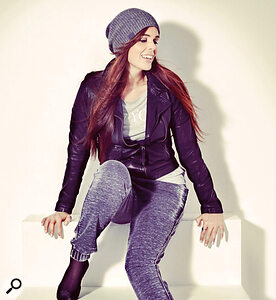 “But it’s also so fun,” Neya interjects, smiling, “because you can do something that would never be acceptable in Western music. Like chromatic melodies! You can’t have a K‑pop song without a chromatic melody!”

The three of us laugh in unison because it’s so true: chromatic melodies, which are uncommon in the West, are the staple of Asian pop music.

Even very well‑known writers are subject to the rules of the K‑pop melody. “We had collaborated with Ryan Tedder on TWICE’s ‘Cry For Me’,” Melanie Fontana shares. “The label was looking for a slow, sexy ‘Fifty Shades Of Grey’‑type song. We ended up hitting up Ryan, asking him to throw some melodies on the track we made. Once he sent us his melodies, I ended up going through them to make sure they were all ‘K‑poppified’ for the girl group. All small tweaks, but it helped the label envision TWICE singing the record.”

“As a writer, it’s quite fun to write these more experimental songs,” Neya confesses, over Zoom from her Stockholm kitchen. “When you write for the Asian market you don’t have to overthink the lyric. You can let the melody steer the song. You get very free in your way of creating. It’s fun to mix it up!”

When you write for the Asian market you don’t have to overthink the lyric. You can let the melody steer the song.