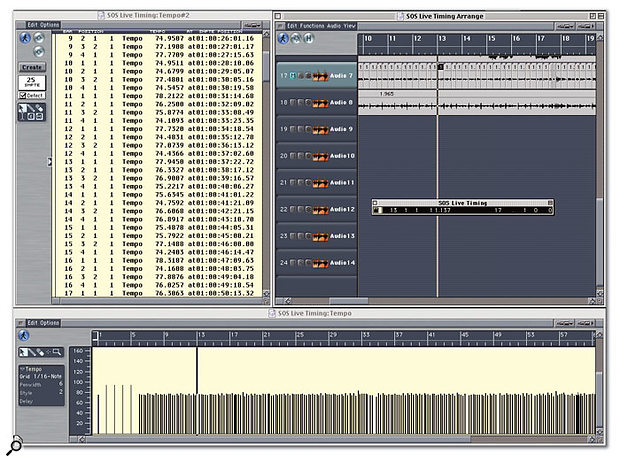 Although rather time-consuming, this technique for locking your sequencer to a live take is often the best.

In last month's column I discussed two ways of shifting MIDI sequences into line with live performances: the simpler one using Groove Templates; and the more complex generating a new dynamically changing tempo map. I also showed how to go about using the former approach. This month, I'll be taking a look at how to apply the second of these two techniques.

Although generating a tempo map is a more laborious procedure, it is better suited to situations where you want to sync the sequencer to a complete take of a live band. Also, unlike the Groove Templates method used last month, the following strategy lets you lock any number of slave devices, be they hardware or software, to your live take — so your Rewire and VST/AU applications will lock to the drummer just as tightly as any drum machine or slaved sequencer.

Because the task ahead is very repetitive, I recommend that you set up a number of Key Commands that will make life easier and speed things up considerably. Also, it is important that you set up your work place ergonomically so that you won't inflict a repetitive strain injury on yourself — or if you do, make sure that you can sue the producer!

The Key Commands you will need are: Set Locators By Objects (don't use the Rounded Locators version), Adjust Tempo Using Object Length And Locators, Split Objects By Locators and Open Sample Editor. In the Sample Editor window have a Key Command for Goto Selection End. I also usually have the Event Float window open (you can get to this from the main Options menu), since it gives all the information I need about a chosen object at a glance.

The other thing you should do is make sure that you will not lose the timing information of your original takes. Since Logic references the position of audio regions against tempo information, creating tempo changes will move the relative positions of regions. There are two ways to prevent this from happening: bouncing each audio track so that every track begins on the first beat of the song; or (less time and disk intensive) selecting all tracks and locking their SMPTE positions using the Lock/Unlock SMPTE Position Key Command.

Logic 's graphical interface doesn't follow all the tempo changes in the waveform display of the Arrange window. When you put the original track next to the cut-up version they will not match graphically. This doesn't mean that your cut version is out of sync.

You can test this by running both tracks at the same time and flipping the phase of one with the Gainer plug-in. At the same level both signals will completely cancel each other out. Also, when you place a cut somewhere in the original track, the display will adjust to show them synchronised again. Ingo Vauk

Now the fun begins! If your original audio was recorded to a click track, the grid of the arrangement window should be close enough, but if the live take was done without any clock reference it is helpful to set an approximate starting tempo to work to. Once you've done this, zoom in on the beginning of the audio file in the Arrange window until you can see the first beat of the track (perhaps the beginning of the count-in). Cut the region at the closest quantisation value, delete the region that runs from the cut to the end, and select the remaining region. Set Locators By Objects and then enable Cycle mode. This helps to quickly locate the screen to the point of the track you are working on in case it jumps somewhere else.

Where the waveform and the grid markings don't coincide (top), just drag the region end point to the beginning of the audio transient (middle), and then the tempo can easily be adjusted to match them up (bottom screen).

Now Open Sample Editor and Goto Selection End, adjusting the zoom factor so that you can clearly see the attack portion of the next hit. (This zoom factor will apply to any subsequent Sample Editor windows). Adjust the region length by dragging the region's End point as close as possible to the attack of the next transient. Close the Sample Editor window (using the default Apple+W Key Command). In the Event Float you will see that the object length has changed to a few ticks longer or shorter than the previous, quantised length.

Now Adjust Tempo Using Object Length And Locators. You will be asked by a pop-up dialogue whether you want to set the tempo globally or create a tempo map. In this first instance it makes sense to do it globally, since this will clear any previous tempo information. The tempo indicator will change, and the region will again be of a quantised length (as long as your Cycle).

Now extend the region by dragging the bottom right-hand corner to the start of the next transient waveform and let go at the closest quantise value again. It doesn't matter whether this falls slightly before the waveform or cuts into it. Split Objects By Locators and select the right-hand object using the right cursor key (the default Key Command for Select Next Object). Set Locators By Objects again, and then open the Sample Editor, where you will see that the new region starts exactly on the beat, but ends slightly off the next waveform transient. Adjust the region length again and close the Sample Editor. When you Adjust Tempo Using Object Length And Locators this time, opt for the Tempo Map option. In the Event Float, the length will be quantised again, and the tempo display will be slightly different, reflecting the fact that you've created the first tempo change.

Repeat this procedure until you've created a tempo change for every beat. To summarise:

It is important to check the timing in the beginning against some MIDI programming, so that you make sure you get the desired effect and choose the right hits to quantise to. Also try to stick to the same zoom factor in the Sample Editor window, and develop a feel for a consistent point at the waveform attack. This will help to get a smooth result, with the beats quantising to the same point of each live hit.

The Rewards Of Patience

At first this will be a time-consuming procedure, but once you get the flow of the editing sequence it becomes more fluent and almost like typing (the only two actions that you need the mouse for are extending the region to the right and adjusting the length in the Sample Editor). Be prepared to spend about an hour and a half on a four-minute song, depending on how fine you cut the audio. In a lot of cases it will be enough to adjust the tempo at the main beats of each bar and spend some extra time on fills. Don't forget to save regularly, as losing half an hour of this kind of work is a painful experience.

Once you have done all this it will be a joy to just run Recycle or Live loops with the material, quantise any takes you are doing on keyboards, or whatever.