Making Space In Your Mix

5 Tips For A Less Crowded Mix By Dom Morley 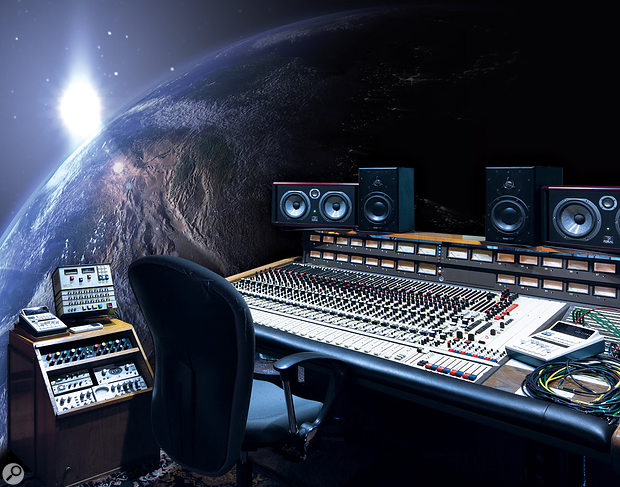 Elevate the clarity of your mixes with our indispensable guide.

One of the biggest challenges when mixing is making your track sound spacious and open, especially when there's quite a lot going on. There are some fairly simple steps that you can take, however, that will help you achieve just that. I'll break it down into five areas.

First and foremost: filtering. I use filters on almost every element in a mix. For example, I really want to have only the kick drum and the main bass sound occupying the bass frequencies of my mix, so everything else needs a filter on it. Even if a sound is only really audible in the upper mids, it's highly likely that there's some low-level bass in there which needs to be filtered out. Otherwise, you end up with a couple of dozen elements with 'hardly any' bass frequencies in them, and then the clarity and punch that you originally had in your kick and bass are gradually lost in a cloud of subtle rumbling. This applies to the top end as well. If you're introducing an element to your mix that doesn't need brightness or 'air' on it then put on a low-pass filter and leave that space in the high frequencies for the instruments that need to shine there.

I know filters are present in your EQ plug‑ins, but I think it's good to talk about these separately — even if only to stress the importance of filtering! When introducing a new element to your mix your first thought should be: "What does this clash with?" This isn't a musical question but an EQ one. You're listening to the new element and trying to hear which frequencies now sound crowded or muddy because of the new addition.

Let's take an example. Say I have drums, bass and piano in my mix sounding great, and then I add an electric guitar. I know I don't want any bass frequencies in the guitar, so I filter up to around 200Hz (because I've read this article and that's what I do now). Next I listen for what sounds cluttered and, doing a bit of an EQ sweep, I think the guitar and piano are both quite present at 500Hz. To clear this up I'm going to EQ a dip into the new guitar part at 500Hz, which lets the piano sit in that frequency. In this example we'll assume there are no other clashes, so the mix is sounding good now. However, you can go deeper than that. Ask yourself if there's anything more than can be taken out without compromising the sound. Try pushing your filter a bit higher — does it still sound good? If so, great, you've just created more space without losing quality. Now EQ a dip into where the vocal will be sitting — make some pre-emptive space for that. And try filtering off some top end. Does that work as well? How far can you go with reductive EQ until it stops sounding good? Restrict each element to the frequencies it needs to sound good, and nothing more, and you'll find you have a lot more space and clarity than you had before.

Use mono. If you're using soft synths, or even hardware ones, you'll find most sounds come 'out of the box' in stereo. A lot of these don't need to be. Assess each element as you add it to the mix and decide whether it really needs to be in stereo. If not, then mono it up and you've automatically saved space.

Use stereo. Not everything should be in the centre, or the 'phantom centre' of a stereo source that's panned hard left and right. Having read the previous paragraph, you now have more mono sounds than before, so place them all across the stereo field. Try having more things on one side than the other. There are no rules. Even stereo sounds don't have to be hard left and right. If you want to keep a sound stereo, try panning it more to one side than the other. And a top tip: when you introduce a new element and are not sure where it should go, just do a slow sweep from left to right. The area where it sounds loudest is the area of your mix where there is naturally the most room for this sound. Leave it there.

Restrict each element to the frequencies it needs to sound good, and nothing more, and you'll find you have a lot more space and clarity than you had before.

Use of reverb is a subject that very much deserves an article of its own, but we should touch on it here as it obviously helps space elements out in a mix. The first thing to say is that all the filtering and EQ points that I've already made also apply to reverb. You should always be listening to a new reverb the same way you listen to a new instrument in your mix: which frequencies do you need, and which can go? The creative use of mono and stereo applies too. Reverbs can definitely be mono; indeed, this is an easy way to add space and clarity to a mix. Try a mono reverb panned to the same position in the stereo field as the instrument that you're applying it to. Much more focused. Now try the reverb panned onto the opposite side. Much more interesting!

Pre-delay is a good thing to experiment with, too. Use of pre-delay is effective in making an instrument sound close to you, but in a large space. This can be very effective if you want something like a lead vocal to have a long reverb but still sound present. The more reverb you add, the bigger the space around your instrument, but with a long pre-delay, it remains close to you instead of disappearing off into the distance.

Delays are also a useful alternative to reverbs as they are often less dense, so take up less space in a mix. If your track is beginning to sound crowded, try reaching for a simple delay to set an instrument back a little before trying a reverb.

As well as adding punch to an individual sound, compression is great for glueing a number of elements together, and through that process, creating space around them. This is easiest heard across the mix bus, where my favourite tool is the Fairchild 670. While I don't have a real one of these (check on Reverb or eBay to see how much these go for if you want to laugh, cry, or both), I do have the UAD plug‑in version, which is excellent. The 670 has a beautiful way of pulling in the bottom end of whatever signal it is fed, making it tighter and more focused. Now try that on your drum bus, across your guitars and so on. You'll find that bus compression can tighten up different sections of your mix, and so leave space for the other elements around them.

Hopefully that's given you a few ideas to work with on your next mix. If you only take one thing away from this, though, make it the point about listening for which frequencies sound cluttered when you bring a new element into a mix. Getting good at this one thing will make a bigger difference to your mixes than anything else.