Secrets Of The Mix Engineers: Clint Gibbs By Paul Tingen 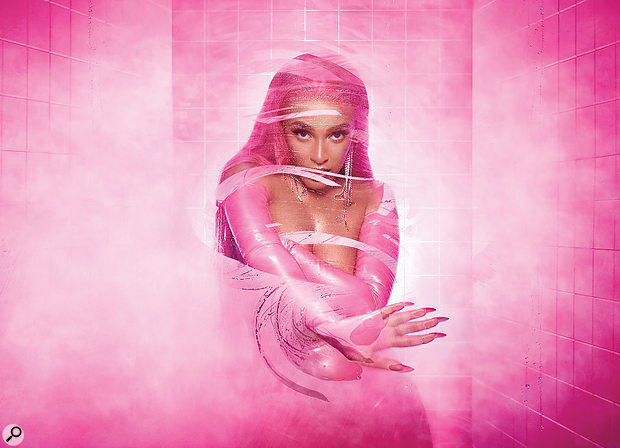 Doja Cat's 'Say So' was already a worldwide hit when a new version featuring Nicki Minaj rocketed to the top of the charts. One man mixed them both.

'Say So' was both Doja Cat's and Nicki Minaj's first US number one. Doja Cat's original version, released on January 28th, reached number two in the UK and number five in the US. A remix, with Nicki Minaj adding vocals and a rap, was released on May 1st, pushing the song to the much-coveted top spot in the US (different versions of a song that meet certain criteria are counted as one). 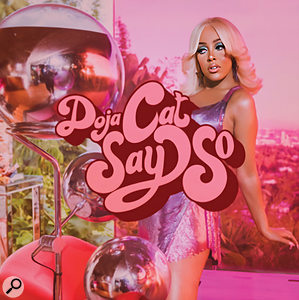 'Say So' was written by Amalaratna Zandile Dlamini, Lydia Asrat, Lukasz Gottwald & Yeti Beats. Produced by Tyson Trax.The track also marks the first number one since 2014 for legendary producer Lukasz Gottwald, aka Dr Luke. Known for big hits by Katy Perry, Pink, Avril Lavigne, Katy Perry, Ne-Yo, Shakira, Miley Cyrus and many more, he's spent the last few years embroiled in widely publicised legal problems which appear to have diluted his stream of hits to some degree. The production of 'Say So' is credited to one Tyson Trax, and while neither Luke nor his team will confirm this, it's an open secret that the name is a pseudonym for the great producer.

Man Of Many Hats

Clint Gibbs is Dr Luke's chief engineer and occasional mixer, a role he also fulfils for Prescription Songs, Dr Luke's production company. "I do quality control," explains Gibbs, "final delivery, upload sessions into the archive, and help songwriters and producers with their setups. I also do the IT for the company, email, tech support, and so on. I wear an insane number of hats! But overseeing studio operations and being a mixer is my main one."

Renowned engineer Serban Ghenea remains Dr Luke's go–to mixer, but Gibbs has increasingly taken to mixing the big songs, and mixed both the original version of 'Say So' and the remix, as well as 10 of the 12 songs on Doja Cat's album Hot Pink (2019). To be able to have the time to do all his mixes, and be there for his wife and baby, Gibbs has taken a back seat at Dr Luke's studio and now mostly works at home. Engineering duties at Dr Luke's studio tend to be performed by Kalani Thompson and Tyler Sheppard.

Originally from Las Vegas, where he played in garage bands and was a fan of metal, Gibbs moved to LA in 2007, when he was 21. After studying at the LA Recording School he started work as an intern at Conway Studios in January 2008. It was here that he met Dr Luke, and started working for him and his then-chief engineer Emily Wright, in December 2010.

"Luke had a run–down studio in the Hollywood Hills, but it was super-private and great music was made there. Whenever we worked with big artists and finalised things we went to Conway or the Record Plant. After that Luke had a house in Malibu that we worked out of for a while, and in 2015 we started building our current studio in Hollywood. The studio is pretty simple, with huge PMC speakers. We are big fans of the PMC company, and they built us new speakers for that room. They really wanted to wow us, and to give us the volume we needed. In fact, they built their huge QB1 XPD‑A speakers because of our room. They are as tall as I am! The speakers have plenty of low end, but also are very detailed. I often work on them at low volumes. We also have some nearfield PMC twotwo8 speakers with two sub2s, and some small Genelec 8020s. 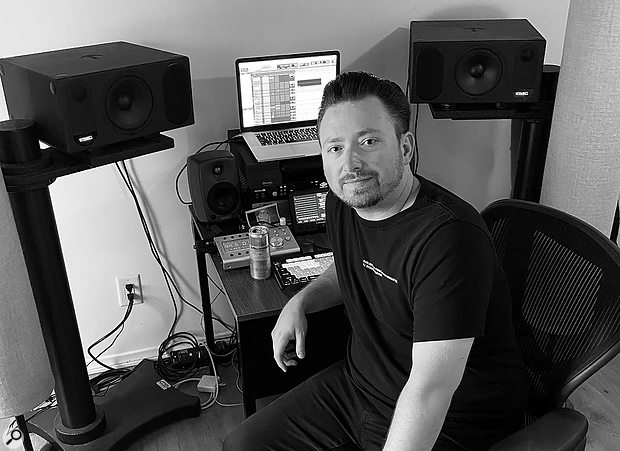 Clint Gibbs now mostly works from his home studio, which is based around a MacBook Pro running Pro Tools, a UA Apollo 8p interface, a Grace Design monitor controller, a PreSonus FaderPort for vocal automation, and PMC, Genelec and Beats speakers for monitoring.

"Our mics are the Sony C800G and Chandler REDD Mic, for backing vocals and to record instruments. The C800 is great for pop, because of the detail and the air, which helps vocals cut through the track. But for hip–hop, where the new style is to stand away from the mic and to the side, with chains rattling, it's more of a challenge. Though I like all the extra noises! We want quality stuff going on, so we also have a rack of top outboard, which contains Chandler TG2 mic pres, which Luke has used since I can remember, and I know [producer] Max Martin [with whom Gibbs regularly works] also loves them. They warm up the top end of the C800. We also have the new UA 1176 compressors, which are quieter and more consistent. From there we go straight into Pro Tools. Of course, there are tons of vintage synthesizers and guitars in the studio, and they are recorded via DI and API 3124 mic pres. Once we are in the box, we are in the box.

"I have spent most of the last 10 years trying to keep up with Luke, often going until 4am, but I now do almost all my mixing at my home, also because of the lockdown situation. My studio is pretty bare-bones, with a kitchen table with my MacBook Pro and the latest Pro Tools, my Grace m905 monitor controller, a PreSonus FaderPort single fader for vocal rides, and then I have my [Universal Audio] Apollo 8p, Genelec 8020 and PMC twotwo6 monitors, a Beats Pill for speaker reference, and my Apple Mighty Mouse. I probably do the majority of my mixing here, but I am pretty flexible when it comes to my mixing. I can be anywhere. I will take my laptop, and I will go to the artist's place, or anywhere else. I also have Sennheiser HD650 open-backed headphones. Jerry Finn had them when he worked at Conway, and he's my idol. I really like to check panning on these headphones, and spatial stuff in general. They are easy on my ears, and ideal when my baby is sleeping!"

Jerry Finn, who died tragically young at age 39 in 2008, worked with the likes of Green Day, Morrissey and Blink-182. Gibbs also name-checks Emily Wright, Dr Luke, Max Martin and Cirkut as other mentors, and elaborates: "I was pretty green when I started working for Luke. I'd sit on the floor while Emily recorded Britney Spears, making sure Britney could not see me so she'd be more relaxed, and tweaking compressor settings. I learned a lot from watching all these people work, and also from listening to Serban when he did live mixes for us via iTunes stream link. I'm blessed to have worked with so many talented people, and have over the years just slowly worked on my craft. Reading SOS's Inside Tracks also has been a big help! I never asked to be a mixer, but when the call came, it was great."

Gibbs also mixes for several other artists on the Prescription Songs roster and others outside the company, like Azelia Banks, Kim Petras, Allie X, Bonnie Mckee and Emily Warren, to name a few. But for most of his time, Gibbs is on call to mix for Dr Luke. Because he's less and less physically present at the producer's studio, he's worked hard at streamlining the entire process from recording to mixing. He's trained engineers Thompson and Sheppard and set up recording templates for them to record in, and which also make his mixing process easier.

"We have, for example, vocal and comp template tracks that have been tweaked over the years, with EQ, compression,and de-essing plug‑ins, and eighth–note, quarter–note and half–note delays, reverb, and Antares Auto–Tune 5. At Luke's studio we are still on Pro Tools version 10.3.8, HD3, HD I/O — the classic build — because we really like the low latency on Auto–Tune 5, which allows vocalists to hear the effect while singing. However, during this year I plan to upgrade our rigs to the latest version of Pro Tools, with Auto–Tune Pro.

"Templates are important, but the main thing when recording is to have a good front end, with a good microphone, a good mic pre and a good compressor. I am not about adding 10 plug‑ins to a bus to make something sound good. I really believe in making things sound good from the source. If people manage to make it sound great with 10 plug‑ins, awesome. If it works, it works. But I personally believe in less is better, which you will see in my mixes. I don't have plug‑ins all over the session. The productions I get from Luke's camp always sound good, so I really want to just hit the problems and not overthink a mix and re-engineer it."

With the latter remark, Gibbs hints at an issue that many mixers today are confronted with: with producers getting increasingly good at mixing, artists and producers are more attached to the rough than ever, and this gives mixers less and less space to be creative.

"When I first started, I might have been a little more ambitious and artistic with my mixes," concedes Gibbs. "I think back then I was trying to find my sound. Nowadays my sound is clarity, and loudness. That is what I focus on. But I don't feel restricted, I just want to improve what is there. If I think something different needs to happen, I may hit up the producer and ask if they mind if I try something. But when the artist is very married to the demo, no matter what changes you make, they are not going to like it. So when I mix today, I need to be very delicate. I really want my mix to showcase the production and the song. I don't need to reinvent the wheel. I just want them to go: 'This is everything we wanted, it just has more clarity and is louder than the rough.' I am cool being the guy who improves the rough, I don't feel a need to put my stamp on it, beyond making sure it sounds good. I just take what the producer has done and elevate it."

Clint Gibbs: "For me, the kick, snare and vocals, and the movement that they bring, are the core of the song. If you have them in the right place, your mix is in pretty good standing.

Part of Gibbs' job is to make sure the mixes sound good on all consumer playback media. He mixes mostly on his PMCs, checks on his Genelecs, and, he adds, "I also check my mixes on my iPhone speaker, Airpods, on my laptop speaker, and so on. Very few people are going to listen to the mix in a controlled environment. If it doesn't sound exciting on the phone, I'll revisit the mix and see if I can add something. Most people will first hear the song as a little clip on Instagram announcing its release. If it sounds dope on there, people may go to Spotify or buy the track on iTunes. I do a lot of parallel bass saturation to make sure it translates on phones."

Parallel processing is one of Gibbs' main tools when mixing, and also plays a crucial role in how he achieves maximum loudness. "It starts with initial gain structure," comments Gibbs, "and from there parallel processing to get added loudness to mainly the vocals and drums. At the end there's also a limiter which averages between a 2-3 dB threshold. But I am a really big believer in parallel processing, and it is my main tool for loudness. I match the plug‑ins on parallel tracks to prevent latency between the buses, so I know for sure that I have the exact same amount of delay compensation. I find this gives me the tightest sound that I can get."