Not a world-changing development, but worthwhile: tracks can now be named as they are created.

Did the first full year of incremental Pro Tools updates justify the cost of our subscriptions?

Like most things, Pro Tools has its detractors. The Internet being what it is, the disaffected are usually more vocal than the contented, and this can give the impression that the Pro Tools world is in crisis, with development at a standstill. But is that really true? Or are we just witnessing the deliberate change of direction Avid promised after Pro Tools 2018, where regular (and, it must be said, sometimes not-so-regular) releases concentrating on practical, workflow-based changes replace occasional paid-for integer upgrades with headline-grabbing big new features? Let's have a look back over the 2019 releases and see how much progress was made.

At NAMM 2019, Avid previewed a version of Pro Tools that promised increased voice counts for all. Driven largely by the additional demands being put on systems by Atmos workflows in post-production, maximum voice counts on HDX systems were to be increased from a maximum of 768 to 1152. Voice counts for all Pro Tools Ultimate systems were to be raised from 256 to 384, and to accommodate the easy transfer of large projects from HDX-equipped Atmos rooms to native powered workstations, additional voice packs could be rented annually or monthly.

The really clever bit about this announcement was the seemingly impossible trick of upping the voices available per HDX card from 256 to 384. Unfortunately, Avid discovered some late-breaking streaming issues with the 'free' extra voices for HDX cards, and while these only affected around 15 percent of systems, that was still enough to put this release on hold.

The other big feature of what would have been Pro Tools 2019.1 was uninterrupted playback while performing operations such as assigning track inputs or changing tempo, both things which would previously have caused Pro Tools to stop. Issues arose with this feature too, and eventually, the first release of 2019 was 2019.5, which became available in May.

The HDX voice count increase remained in development for this release, but Native Ultimate users got voice counts up to 384 as standard and up to 768 with appropriate additional voice packs. 2019.5 also brought seamless playback for pretty much everything: plug-in operations, track creation, changing selections, tempo operations and so on. It made me realise how ingrained the habit of stopping playback before doing most things had become for me: as a long-time Pro Tools user, I forget that you no longer have to stop playback and still do it most of the time.

Pro Tools 2019.5 also brought a useful raising of the MIDI track limits in all versions from 512 to 1024 tracks — certainly enough to get into trouble! Along with this came a tweak to the new MIDI keyboard shortcuts involving the arrow keys, which were introduced in Pro Tools 2018.1. These MIDI shortcuts are as follows (on Windows machines, substitute Start for Ctrl and Ctrl for Command):

The change introduced in Pro Tools 2019.5 was to enable these shortcuts only when the edit insertion point or edit selection is on tracks that are in Notes or Velocity views: a small but important improvement, and representative of the kind of tweaks to workflow which indicate attention to detail, presumably based on feedback from users. Another example of a small tweak which, while it will never grab headlines, is saving users time every time they use Pro Tools is the addition of a track name field in the New Track dialogue, allowing the setup of a new session to be achieved in a single pass. Use the Tab key to move between the number of tracks field and the name field.

Another long-requested feature from an important group of users is the much anticipated Multiseat licensing for both educational and non-educational users with a minimum seat count of five. This server-based network licensing makes administration of Pro Tools licences so much more efficient. I say this as someone who has lost entire days administering licences to labs full of machines with physical iLoks!

Unless you had an Avid MTRX, the most significant feature of June's update was the announcement that Avid's HEAT console saturation algorithm was "available to all" Pro Tools users. This was misinterpreted by many to mean that HEAT was now bundled free to all Pro Tools users. Not so: prior to this release, HEAT was only available to Pro Tools Ultimate users. The update made it available to standard Pro Tools users, but only if they acquired the necessary licence. 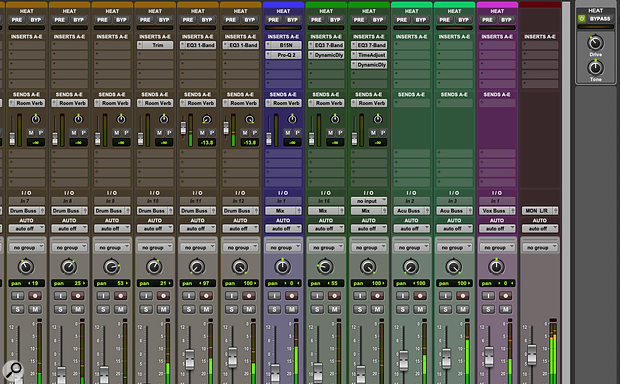 HEAT is now available to all Pro Tools users (but it's not free).

October's release was heavily focused on video and Dolby Atmos, with significant new features including support for higher resolutions and frame rates, and the introduction of the Dolby Audio Bridge for Pro Tools Ultimate. The Dolby Audio Bridge is potentially an interesting development because it provides 130 outputs from Pro Tools via Core Audio. While this is designed to benefit the post-production community, for whom Atmos is very much a current workflow, there is growing interest in Atmos in the music world too.

The last release of 2019 was billed as an "initial support release" for Mac OS Catalina. Considering that the first version of Pro Tools to support Mojave was 2019.5, eight months after Mojave's release, Avid releasing a compatible version after just two months is great news. However, because Catalina finally kills support for 32-bit code on Macs, and there is 32-bit code involved in supporting Quicktime, there are caveats about exactly who should consider using this version. In short, if you're purely using Pro Tools for music all is well, but if you use Pro Tools for video you need to look at things a little more closely.

Server-based network licensing makes administration of Pro Tools licences so much more efficient. I say this as someone who has lost entire days administering licences to labs full of machines with physical iLoks!

Overall, it's fair to say that 2019 was a post-production-centric kind of a year for Pro Tools. While budgets are squeezed elsewhere in the creative industries, demand for Atmos content has led to growth and expansion in post, so it is not surprising that Atmos workflows have received attention in 2019. New features for music production have been thin on the ground, but one final development worth mentioning is the addition of UVI's Falcon 2, an upgrade to the previously offered version of Falcon for Pro Tools users on active upgrade plans or a current subscription. When it was bundled for qualifying users at the end of 2018, Falcon brought a grown-up virtual synthesizer VI to Pro Tools: the previous offerings from the old AIR instruments days were definitely showing their age. 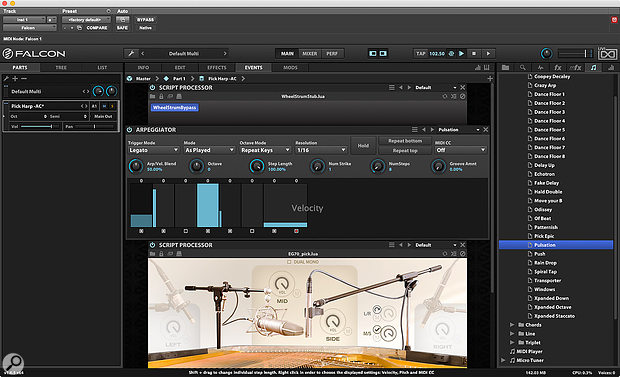 UVI's Falcon 2 was a welcome addition to the Pro Tools virtual instrument arsenal.

In addition to all the features of the original version, Falcon 2 provides a variety of new and improved oscillators such as an additive oscillator, new modulation sources like the Parametric LFO and the Multi Envelope modulator, which can now be controlled via drag-and-drop from MIDI or an audio sample, and new effects. Of particular interest to MIDI power users, who are sometimes quite vocal about the perceived lack of MIDI processing features in Pro Tools compared to other DAWs, is the Event section which provides many of the MIDI tools frequently requested in Pro Tools, including arpeggiators, a chorder, the ability to generate guitar-like strums using the mod wheel, a drum sequencer and even scripting.

So 2019 was a little bumpy in the first half of the year, while the second half of the year was dominated by Dolby Atmos. There was seamless playback to help music users stay in their creative groove and there were some useful workflow tweaks along the way for musicians, plus useful extras like Falcon 2 and HEAT. What 2020 holds for us at the time of writing we can't yet say, but whatever surprises the NAMM show brings, at least the Mac users amongst us will be able to try them on a current Mac running Catalina.