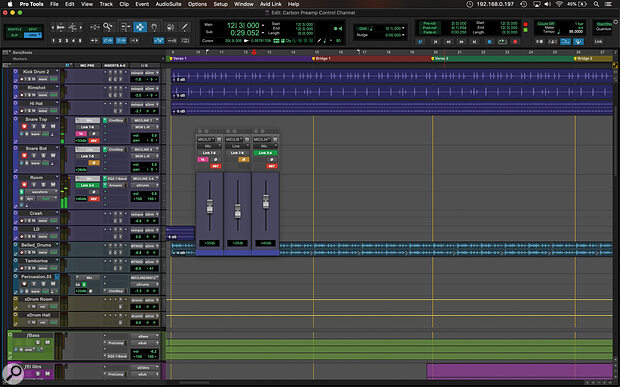 The preamps on Avid’s Carbon interface can now be remotely controlled directly from within Pro Tools, or via the Avid Control app.

The latest Pro Tools and Eucon updates offer much to both pro- and project‑studio users.

In the closing days of October, Avid announced the release of Pro Tools 2021.10 and Eucon 2021.10. Although not a milestone like 2021.6, which offered huge performance gains courtesy of the Hybrid Engine, this double release brought some useful improvements for music production. There’s also some very welcome news for HDX users anticipating upgrading their Apple computers to one of the new M1 Pro and M1 Max machines announced in October.

The word ‘native’ has always been one that needs careful attention in the Pro Tools world. The potential for confusion about whether a ‘native’ Pro Tools system is software‑only Pro Tools or the confusingly titled HD Native hardware can get messy, and the same has to be said of the language used to describe Apple Silicon compatibility. At the time of writing, Pro Tools software is compatible with Apple Silicon‑based Macs via Rosetta 2, but it is not yet natively supported. However, users of Pro Tools HDX systems haven’t been able to use their hardware on M1 Macs because although applications can run using Rosetta, drivers cannot. Without a suitable HD driver, HDX systems have been excluded from the ‘M1 via Rosetta’ party.

This has changed in 2021.10 with the release of a Universal Binary HD driver that supports Apple Silicon natively. This means that hardware‑based Pro Tools systems can now run on M1 Macs. Only when a fully M1‑compatible version of Pro Tools software is released will the program be able to run completely natively on Apple Silicon, but until then, HDX users will be able to use their systems, with an appropriate chassis, on an M1 Mac.

The release of Carbon was proof, if it were needed, that Avid haven’t forgotten about project‑studio users. Those who have used it — and I’ve had a unit since it was released — will know just how well the features and workflow address the needs of the user who needs a latency‑free Pro Tools tracking experience for recording bands. This kind of user is typically working without the benefit of assistants, so the remote and recallable mic preamp settings introduced to Carbon in 2021.10 will be extremely welcome.

Being able to tweak gain, polarity and phantom power from an iPad while setting mics is something which will make setting up sessions much easier.

The eight built‑in mic preamps in Carbon can now be remotely controlled from Pro Tools software or the Avid Control app. The ability to tweak gain, polarity and phantom power from an iPad while setting mics is something which will make setting up sessions much easier, and with the ability to remotely control preamp settings comes the possibility to save and recall preamp settings with a Pro Tools session or template. 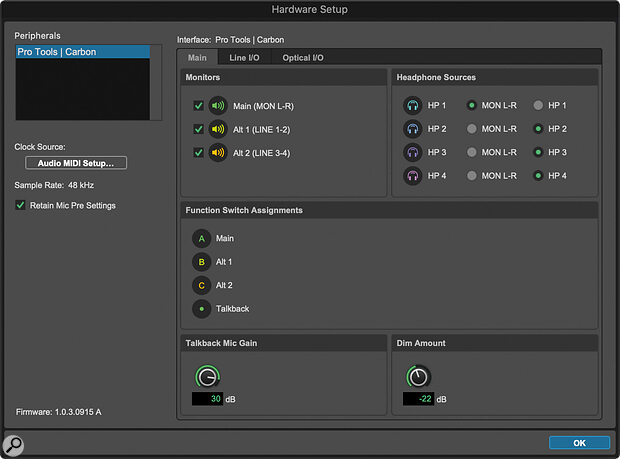 The Retain Mic Pre Settings option in the Hardware Setup window allows you to switch projects while keeping your Carbon preamp settings the same.

The preamp controls can be accessed from a new section of the Mix or Edit Window track header, and a floating window can be detached and placed in the UI in a similar way to floating send faders. The use of colour is a nice feature of the Carbon unit: it uses multicolour illumination of buttons and meters to guide the user through the current settings, and the way this colour is carried through into the software UI is helpful, showing the same colours for different impedance settings on both the hardware and software.

Unfortunately at present there is no way to link or daisy‑chain Carbon units, so in a fully expanded system with 16 additional preamps connected via ADAT, only the eight preamps in the Carbon would be remotely controllable. Remote control of third‑party preamps is possible but the choices are limited at present. A dedicated Carbon expander mic preamp unit would be a lovely thing but I won’t hold my breath, particularly considering how personal mic preamp choice is.

On the subject of the ADAT ports in Carbon, these were previously ADAT‑only, but with Pro Tools 2021.10 they can be individually switched to S/PDIF at sample rates up to 96kHz — useful for those who need it.

Pro Tools 2021.10 includes integration with Native Instruments’ Komplete Kontrol system, which brings together the vast content libraries available from NI with their very popular MIDI controller keyboards. The micro‑sized M32, and the full-sized A and S series, all use a system of deep integration with Native Instruments products allowing content browsing and control of patches as well as a level of DAW control such as basic mixing, session navigation and transport control. It’s a long way from the kind of control offered via Eucon but it is a useful extension to what is available using MIDI or HUI.

Multichannel tracks used to be principally of concern to those working in post‑production, but the recent developments in Dolby Atmos, with Apple introducing Spatial Audio to the Apple Music platform and integrating Atmos into the recent Logic 10.7 release, provide further evidence that music production is moving beyond straightforward stereo. While post mixers have been working in surround formats for years, for the majority of music mixers, the jump from stereo to Dolby Atmos is a large one. Managing routing to and from buses of different formats has always required some manual intervention, for example with Downmixer plug‑ins being used for fold‑down operations and use of sub‑paths.

The new update to Eucon includes swap layers, which are a feature available on the big Eucon surfaces like the S6. There are also performance improvements, which include changes in the way data is exchanged between the surface and the host computer, to alleviate the lag which can happen when large surfaces are being used with very large sessions. These changes affect all Eucon surfaces, but the bigger the surface, the greater the difference they will make. Users of dual‑operator S6 surfaces have reported very significant improvements, but someone with an S1 running modestly sized sessions is unlikely to see much change. 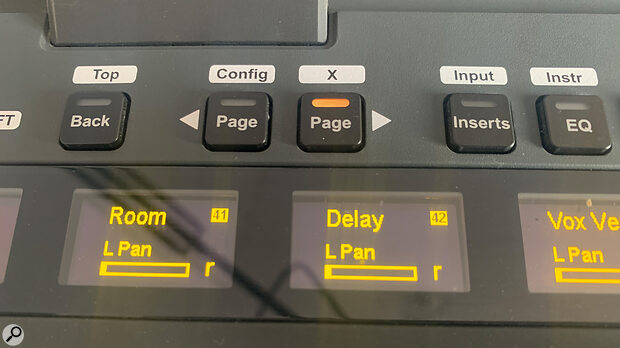 One of the changes to Eucon is that the previously unassigned ‘X’ key now defaults to acting as a Bypass button.

Something which is going to make a big difference, though, is the introduction of a dedicated Bypass key to the S1. The ‘X’ key was previously identified as being currently unused but with 2021.10 it is available as a bypass for inserts: a small but very significant feature. There are other improvements, such as the Avid Dock’s monitor knob, which is very useful to users without a dedicated monitor controller, as it can be mapped to a master fader in Pro Tools: do this by right‑clicking on the master fader’s track name and select Eucon Monitor. The monitor knob is now touch‑sensitive, so you can see the current volume just by touching the knob. The resolution of faders is now higher below ‑10dB (I hadn’t noticed that they lacked resolution below ‑10dB, but more is more!). New Softkeys have been added to the already comprehensive list already available: specifically, I/O, EQ Curve, Object and Meters and Faders.

Pro Tools 2021.10 suggests that the pieces are coming together for a native Apple Silicon release before too long. While we don’t know when that will be, the introduction of the new M1 Pro and M1 Max, the Pro Tools Hybrid engine as released with 2021.6 and 2021.10’s introduction of the Universal Binary HD driver mean that, particularly for HDX users with Macs, the future looks good.

Pro Tools 2021.6 updated the Colour Palette to include a slew of UI customisation options. This has been updated in Pro Tools 2021.10 to include a High Contrast UI scheme which is aimed specifically at making Pro Tools more accessible to users with a visual impairment. This update includes settings like the global colour control of text and lines, and the ability to put white borders around text fields.