Pro Tools: How To Beef Up Your Bass 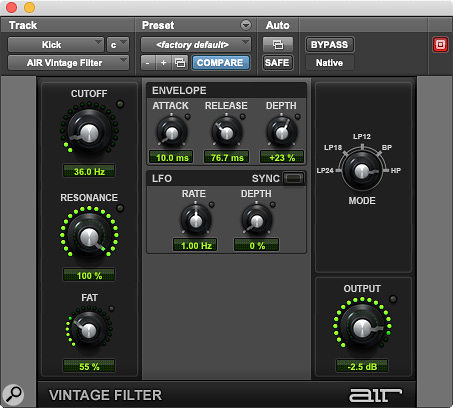 The high-pass mode in the oft-overlooked AIR Vintage Filter plug-in can be used to add a resonant boost to weedy kick drums.

Pro Tools offers numerous ways to beef up an anaemic low end. We show you how...

In this month's Pro Tools workshop, we're looking at an old issue which in my experience turns up more often than it should: a lack of bottom end. Our appetite for bass has increased enormously over the years, and the depth and level of bass frequencies in old material is positively tame by today's standards.

Great dollops of the low stuff are certainly seductive. We are hard-wired to respond to deep bass as potentially dangerous, and this is why we find it exciting, it's not surprising that one of the most common rookie mistakes in music production is to wind up a low shelving EQ in the mistaken belief that you can't have too much of a good thing. Unfortunately, while a high-pass filter can right many wrongs when it comes to controlling excessive bass, there isn't an equivalent easy fix that can increase the level of bass on sources where it is lacking. Try boosting the bass on a 1kHz sine wave and the self-evident truth that you can't use EQ to manipulate frequencies which aren't there in the first place becomes very clear! So what can be done to rescue a lightweight sound, and can it be done using stock Pro Tools plug-ins?

EQ is the obvious answer, and it really ought to be enough to fix a lightweight kick — if the drum is properly tuned and generated significant bottom end in the first place, then a little tweak at the right frequency should sort it out. There are two pitfalls here. The first is that if your monitoring environment is less than ideal, you can end up cranking the low end without a clear idea of what you're hearing, only to get a real shock when your mix is played back over a system that can actually reproduce those sub frequencies. Headphones and spectrum analysers can help, but don't overlook the value of moving around, or even listening outside of your studio — low-frequency nulls are very common in untreated rooms and often occur at specific locations in a room.

The second pitfall, particularly common with less experienced mixers, is to go too low. As an experiment, when planning this article I captured acoustic kick-drum sounds I particularly admire from well-known recordings and ran them through iZotope RX's spectrogram view to compare their low-frequency energy content. What's obvious is that impact and punch in a kick drum doesn't come from deep bass content: it happens rather higher up the frequency spectrum, and although a big boost with a low shelving EQ might seem the right thing to do, a more considered approach that is specific to the sound of your particular kick drum is always going to achieve better results than a 'more is more' approach.

A more sophisticated approach is to lose the really low stuff and accentuate only the lowest useful frequencies. This can be achieved with any parametric EQ by combining a high-pass filter with a moderate boost just at the corner frequency. For example, rolling off the kick below 50Hz whilst applying a slight boost just above 50Hz can both tighten and boost the perceived level of bass in a kick. However, a useful alternative is to use a resonant high–pass filter.

Many analogue high-pass filters display a degree of resonance, and thus likewise create a peak around the corner frequency; the HPF on a Neve 1073 displays just such a boost when used at 50Hz. Plug-in emulations can provide accurate models of these behaviours, but if you want to experiment with a resonant high-pass filter using stock Pro Tools plug-ins try the ancient, and rather overlooked, AIR Vintage Filter.

AIR Vintage Filter is more commonly used for low-pass filter sweep effects, but it does offer a high-pass setting. By dialling in some resonance, this can be used to add energy around the fundamental frequency of a kick drum. Of the other controls, Frequency speaks for itself and the Fat control adds dirt to the resonant peak, but I'd suggest leaving this off to start with.

Vintage Filter is very resonant indeed and is capable of self-oscillation. High resonance settings can be useful when setting it up: sweeping the frequency will reveal the fundamental of the kick, which will ring dramatically when you reach it (careful if you are monitoring using your speakers!). If you want to accentuate the energy present in the kick, finding this peak and backing off the resonance will help support the kick drum. Adding some distortion using the Fat control will add harmonic content and make those low frequencies more audible on less than perfect monitoring.

Because the resonant filter 'rings' it can be useful in extending the bass element of a kick to add an 808-like quality. If this approach of adding bass that wasn't present in the original is taken further, the resonant filter can be used as an oscillator. Set the frequency below the fundamental of your kick, wind up the resonance and you'll hear a sub tone follow the kick. At extreme settings this sounds like a stepped pitch drop, as the decay of the drum dies but the resonant frequency persists. If the resonant filter is in self-oscillation it will be putting out a constant deep bass tone; you can create a pitch drop by raising the Depth control slightly to modulate the filter frequency, and add a gate to shape the output of the filter.

If you hadn't twigged yet, this has strayed from mixing into synthesis — I have described shaping the output of an oscillator using envelopes to control pitch and amplitude, much like subtractive synthesis. A much better-known version of this approach is the 'sub tone trick', which can be used to get around the inherent limitation of EQ, namely that it can only manipulate frequencies actually present in the recorded sound. 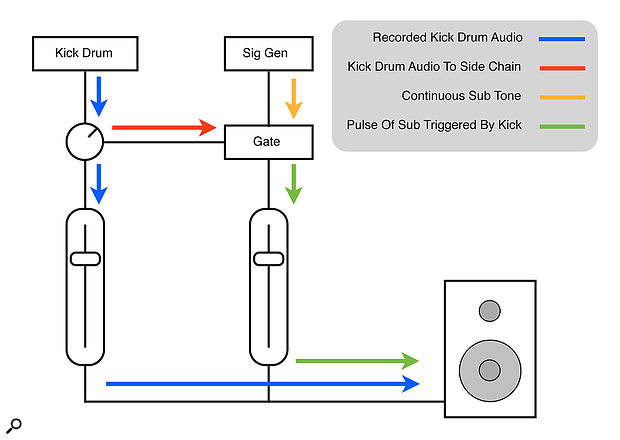 This diagram shows the signal flow involved in the 'sub tone trick'.

This technique uses a gate which is externally keyed to the kick drum. When the gate opens, it passes a low-pitched sine wave from a synth or signal generator, which is thus superimposed on the kick drum. The gate is used as an envelope generator to control the amplitude of this sub tone. It's best to set the signal generator to produce a suitable frequency that's in key with the song, as unlike in the previous example, the frequency doesn't change; if the chosen frequency clashes, it will clash throughout! Something in the 40-60 Hz range is usually appropriate. A gentle attack on the gate usually works well, as the attack of the original kick is generally adequate; the gate release shapes the decay of the sub tone just like the release of an envelope generator on a synth.

Getting mixes to translate between systems is always important, and the issue of disappearing bass is often a symptom of very low-frequency information getting lost on playback systems that can't reproduce sub-bass.

Sometimes, the issue with bass is that it is too deep. Getting mixes to translate between systems is always important, and the issue of disappearing bass is often a symptom of very low-frequency information getting lost on playback systems that can't reproduce sub-bass. Simply turning it up is rarely the answer, but distortion can help a great deal. Overdriving or saturating low-frequency elements creates additional harmonic content which is higher up the frequency spectrum, so can be reproduced on smaller playback systems.

The first choice for such duties in the Pro Tools stock plug-ins has always been Lo-Fi, which shines on bass and, for different reasons, across entire drum mixes. Dial in a little distortion — ignore the other parameters, a touch of distortion is all it needs. Because the distortion is harmonically related to the pitch of the original audio, surprising amounts can be introduced without it 'sounding distorted'. A tip for shaping the additional harmonic content introduced is to follow your distortion plug-in with a one-band EQ running a low-pass filter. This can be used to stop your distortion from getting too 'fizzy'. 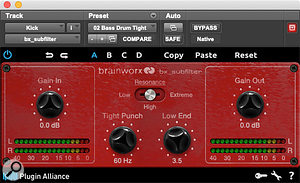 Brainworx's bx_subfilter and Metric Halo's Thump (below) are two very handy free plug-ins that implement some of the tricks described in this article. 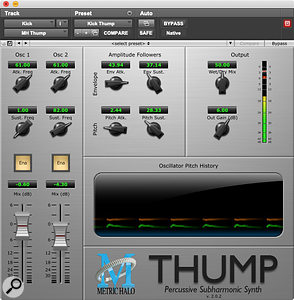 Metric Halo's free Thump plug-in.There are of course more techniques which can be used to supplement, augment or even replace kick drums which are lacking oomph. Sample replacement, virtual instruments and MIDI triggers can all be used to enhance the deep bass that modern productions demand. Maybe I'm being deliberately old-school, but there is something to be said for trying to work with what was originally recorded rather than giving in to the temptation to fix it in post!

If you want to spend money, then of course there are many excellent tools available to help. The current generation of drum virtual instruments offer flawless drum replacement, and sub-synth plug-ins can automatically synthesize additional bass content on pitched tracks and even entire mixes. There are also a couple of free third-party plug-ins that take the techniques discussed here and refine them. Two worth highlighting are Brainworx's bx_subfilter and Metric Halo's Thump. The former is a resonant high-pass filter, and in spite of its fixed, three-position resonance control, is capable of quick and very usable enhancement in the same way as discussed above. Thump, meanwhile, is a sub-tone synth plug-in that is capable of truly earth-shattering results. Its dual sub tones, with separate pitch envelopes, can enhance or exaggerate kicks, and the pitch envelopes neatly solve the sometimes unnatural static boom introduced by the sub-tone trick. Just be careful as this plug-in can introduce a lot of sub-bass!