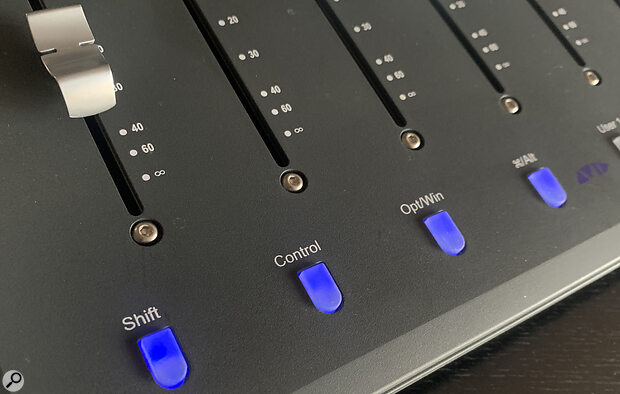 Many control surfaces include all the usual modifier keys as buttons, which opens up a world of mouse‑click shortcuts.

Speed up your mix workflow with these handy keyboard shortcuts.

In a recent conversation about control surfaces, I mentioned that my all‑time favourite surface was the Digidesign D‑Control. I’ve used EuCon surfaces and ICON‑series controllers in the past, but in spite of its sometimes impractical size the D‑Control had an advantage none of the others had, and that was an integral keyboard.

When talking about control surfaces and DAWs the conversation often draws a distinction between using a control surface or using the keyboard and mouse. The lumping together of the keyboard and mouse as the default controllers for software is understandable but they are two distinct devices, and when thinking about my preference for Pro Tools over the other DAWs I use, a lot of this preference is rooted in this distinction.

Logic Pro, for all its impressive capabilities, has often frustrated me because many power users choose custom keyboard configurations with their own choice of keyboard shortcut. Studio One is enormously accessible partly because it is so heavily mouse‑driven, but Pro Tools has a fixed set of keyboard shortcuts which are as powerful and useful as they are precisely because of their fixed nature. They constitute a common language, a standard in studios the world over.

Leaving editing to one side, here I’ll suggest why it is that the commonly asserted aim of replacing the keyboard and mouse with a control surface might to some extent be missing the point. Even control surface designs themselves acknowledge this, by including hardware buttons that do nothing more than duplicate the function of a keyboard modifier. And the D‑Control’s big advantage was it didn’t draw a distinction between the keyboard and the surface, the keyboard was part of the surface.

One of the occasions I most value the keyboard, and particularly the modifier keys, when mixing is when it brings functionality I associate with using hardware keyboard controllers into the keyboard and mouse paradigm. ‘Clutching’, for example, is the name of the incredibly useful feature found on fader control surfaces whereby a Mix Group can be temporarily suspended by moving a fader whilst touching another fader. With a Mix Group active, the faders would usually be ganged together, but by touching more than one touch‑sensitive fader cap, the ganged behaviour is suspended. You can replicate this from the keyboard by holding Control on a Mac or Start on a PC while moving a fader with the mouse.

While it’s always been possible on control surfaces to select and instantiate plug‑ins, the experience on older controllers was laborious, involving navigating menus using rotary encoders and viewing the menu a single item at a time. While it was doable,...