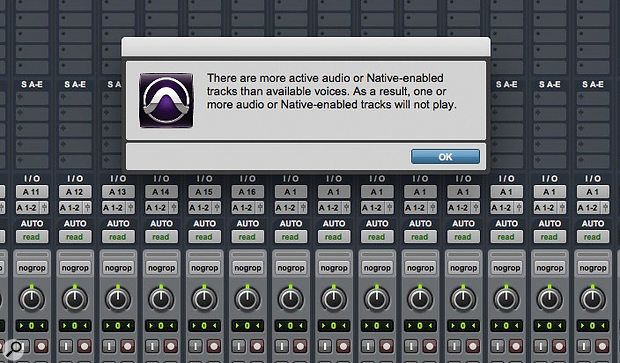 If track count exceeds the number of available voices, you'll see this warning.

Understanding the voice count of your Pro Tools system can avoid nasty surprises on large projects.

At NAMM 2019 Avid announced changes to the voice counts available in some versions of Pro Tools. At the time of writing these changes are still earmarked for a future release, but the plans are in the public domain, and the easing of restrictions for users of both hardware and host-based versions of Pro Tools will be welcome news for those who push their systems to the limit. We'll look at these changes, but before we do, it is worth explaining how the voice count system works, as many users find this is something that only comes to their attention when they have exceeded the capabilities of their particular system.

What Is A Voice?

A 'voice' is an audio stream in Pro Tools. Voices can be routed to and from tracks, or inputs and outputs, and there is an upper limit on the number of voices available in any Pro Tools system. This number is independent of the number of tracks in a session. A mono stream uses one voice, stereo uses two, 5.1 uses six, and so on. People who are used to thinking in terms of tape tracks and mixer channels will probable get the distinction between the audio streams and the routing of those audio streams. Having 512 voices in a Pro Tools system doesn't necessarily mean you'll be able to work with 512 tracks with impunity, and there are several things to be aware of that will eat into your quota of available voices. 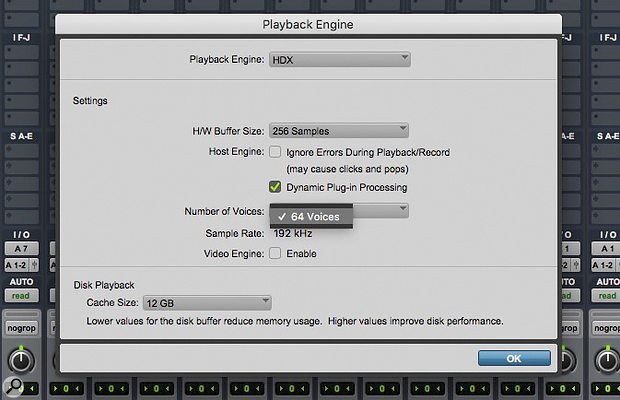 The number of available voices is halved with each doubling of sample rate.

On earlier generations of Pro Tools systems, the management of voices was largely a manual operation, with the user assigning specific voices to specific tracks to get the most out of limited resources; a track which played only at the beginning of a song could share a voice with a track which played only at the end, as the total voice count wouldn't be exceeded. In modern host‑based and HDX rigs this system has been superseded by two choices: Dynamic Voice Allocation and Voice Off.

As most users no longer have the option of allocating voices manually, the 'dynamic' part of the name Dynamic Voice Allocation refers to a historical distinction which no longer affects most people. Some users have wrongly thought that it works in the same way as dynamic voice allocation does on a polyphonic synthesizer, reallocating voices on the fly. This is not the case. If you are running a session requiring more voices than your system has available, then the lowest‑priority tracks, as dictated by their position in the session, will either be inactive or have their voice set to 'off'; either way, they won't sound without intervention.

Although the future release announced at NAMM 2019 will introduce changes, at the moment Pro Tools systems impose the following limits on the total number of voiceable tracks. The upper limit for a Pro Tools system is 768 voiced audio tracks, but the number of voices available in the system as a whole is hardware-dependent. HDX systems with a single card, HD Native systems and software-only Pro Tools Ultimate systems are restricted to 256 voices at 44.1 and 48 kHz. The total number of voices available halves with each doubling of sample rate, so 128 voices are available at 96kHz and 64 at 192kHz. The voice count for an HDX2 system with two cards doubles compared to HDX1, so at 48kHz a total of 512 voices are available, and for a three-card system, 768 total voices are available at 48kHz. 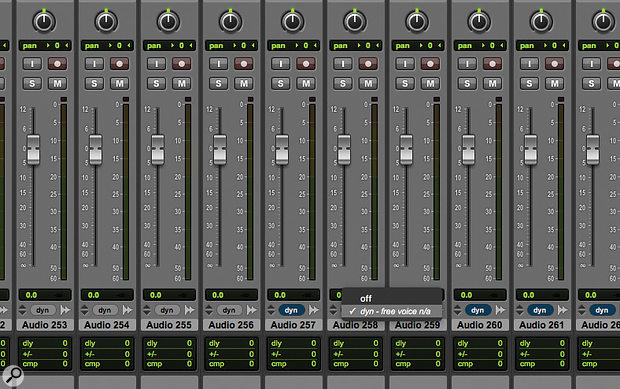 Tracks that Pro Tools has made inactive due to the non-availability of voices show the voice indicator in blue.

Once the voice limit is reached, tracks are either made inactive on an HDX system, or their voice parameter is set to 'off', as illustrated by the voice indicator going blue. Without the option to manually assign voices, what can the user do to mitigate this?

The first solution is to reduce the number of tracks in the session. This can be done by bouncing groups of tracks together, for example by printing to an audio track, though other methods are available.

There is also an easy way to choose which tracks get affected. The Pro Tools mixer allocates voices from left to right in the Mix window or from top to bottom in the Edit window. To give a particular track priority over others simply drag it up or to the left — in a session large enough to hit voice allocation limits, it is probably easier to do this by dragging tracks in the tracks list in the sidebar.

There are reasons other than raw track count why voices get consumed on a typical Pro Tools system, and why you might hit that voice limit sooner than you might think. The first one will make sense to anyone who has ever used a tape machine with a mixer, and plenty of us who haven't, which is that punch recording in Pro Tools requires additional voices, in much the same way as it might require both an input channel and a monitor channel on your console. Playback from Pro Tools uses one voice and the input path to Pro Tools uses another during punch recording. This is why seamless punches are possible, and why it is possible to trim back from the punch point to reveal material recorded during pre-roll.

On an HDX system, crossing over from the DSP domain to the native domain and back again also incurs a hit on voice count. Because of this, it is wise to think about plug-in choice and particularly plug-in order, as is it possible to consume many voices by mixing AAX DSP and Native plug-ins on the same track. One area where this is unavoidable but not at all obvious is when using HEAT in the Pro Tools mixer, as this is a native process just like instantiating a native plug-in. (One of the updates to Pro Tools 11.1.3 included a firmware update for HDX cards which added an additional 64 voices which don't show up in the system usage meters, specifically to help with the voice burden of moving audio in and out of the DSP cards.)

As of 2019, Avid have confirmed that the new maximum voice count for Pro Tools Ultimate will be going up from 768 to 1152. This is the maximum number of voiced audio tracks — but, as discussed earlier, there will still be other ways in which voices get consumed in a session, for example by using native and DSP plug-ins together.

All Pro Tools Ultimate users will get access to at least 384 voices, up by 128 from 256, and Pro Tools Ultimate users on host-based systems will also get the option to rent additional voices in packs of 128. The logic is that as only the biggest projects need access to more than 384 voices, a flexible approach for software-only Ultimate users will be beneficial, particularly as this could be an extra which is billable to the client in many cases. For users who regularly work on sessions exceeding this limit Avid would, I'm sure, argue that an HDX system is more appropriate. The situation is simpler for HDX users. An extra 128 voices per card will bring the total for an HDX1 system to 384, while HDX2 will support 768 and and HDX3 system will reach the maximum of 1152. All of these voice totals are for a system running 48kHz or below, and should be halved at 88.2 or 96 kHz.

There are other changes announced for 2019, too, and hopefully by the time you are reading this the much-anticipated Mojave compatibility will mean that Pro Tools is officially supported on new Macs. As an added bonus, Avid have announced they are doubling the limit for MIDI tracks from 512 to 1024. I can't imagine what I'd do with that many MIDI tracks, but I'm sure there is someone ambitious or foolhardy enough to tackle a MIDI project on that scale!