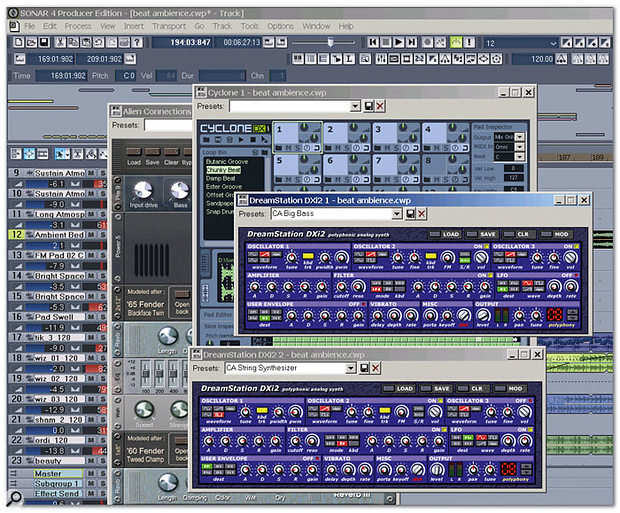 This modest little soft synth has been bundled with Sonar since version 1.0 and is very kind to your CPU resources, yet many Sonar users are still unaware of just how much you can squeeze out of it. We present some evidence.

The Dreamstation DXi2, a simple soft synth that was bundled with the original version of Sonar and keeps reappearing in subsequent versions, doesn't get a lot of respect. Compared to other soft synths, its sound is... well, let's just say it's not a Minimoog. But it does far more than most people realise, and with the right tweaking it can make some very satisfying noises — as we'll find out.

The Dreamstation is a 'virtual analogue' synthesizer with three multi-waveform oscillators and the following features:

Other controls include Portamento time, Distortion, Output Level, Pan, Tune, and Polyphony (up to 16 voices). An additional option, Keyoff, when set to non-zero values, turns a note on for a specific period of time and is intended for percussive sounds.

Two Ways To Save

As you check out the following patches, I hope you'll want to save them. There are two ways to do this: into a folder, where you'll probably save all your patches; or into the list of presets, which is intended to be more of a 'greatest hits' collection of sounds.

To save to a folder of presets, click on the Save button, then navigate to the desired folder. If you go Programs / Files / Cakewalk / Shared DXI / Audio Simulation, you'll find the Dreamstation DXi2 folder, which is as good a place as any to save your sounds. Files are saved with a .DSI suffix. To save into the presets list, just type the patch name into the presets field and click on the floppy-disk button. To delete a preset, click on the X button.

Each of the following patches highlights a particular aspect of the Dreamstation. As you program the patch parameter values, remember to turn on any elements that are needed. For example, if there are parameter settings for the User Envelope, make sure the User Envelope is turned on. To help make things clearer, sections that aren't used are greyed out in the accompanying screen shots. Also note that when references are given to calling up patches, these are the ones included with the Dreamstation. You call them up from the preset field. Let's begin by building a powerful bass patch, just to prove that it's possible. This fat sound uses all three oscillators and the filter.

When you go Insert / DXi Synth / Dreamstation DXi2, it doesn't matter whether you choose 'First Synth Output' or 'All Synth Outputs'. The Dreamstation is not a device with multiple outs, so you'll end up with a stereo output no matter what.

It's A Percussion Synth!

The Dreamstation makes a fine 'analogue' percussion synth. This electro-snare sound uses FM and modulates Oscillator 2 with a super-fast transient created by the User Envelope. Load the preset Effect 04­Wind and make the following settings:

Distortion makes a huge improvement in the sound of the following hard electro-kick drum. Keyboard tracking is turned off so that you'll hear the same pitch no matter where you play on the keyboard. Start with preset 01­Sine.

This ghostly, evocative sound makes good use of white noise but also shows how the 12dB/octave low-pass filter mode can come very close to self-oscillation. Start by calling up the preset Effect 04­Wind.

You could alternatively choose BP (band-pass) filtering, for a broader, less resonant sound. Also note that you'll need to play this patch in the upper range of the keyboard.

The Dreamstation does decent hard-sync sounds (i.e Oscillator 1's frequency is continuously reset by Oscillator 2's pitch) in the lower keyboard ranges, but it's important to choose the right waveforms and other options. This hard sync patch is fairly complex, but it does a good job of creating sync effects. Start by calling up preset 03-Sawtooth and edit the parameters as follows:

For the best results, add some tempo-sync'd delay, and wiggle those pitch-bend and mod wheels. You might also want to add some gentle high-frequency roll-off with EQ.

The Dreamstation was designed during the days when CPUs weren't as powerful as they are now, so it's possible to enable and disable oscillators and filters to save CPU power. But even with everything turned on, by today's standards the Dreamstation is very CPU-friendly. You can thus stack multiple instances without worrying too much about CPU load.

Here's a few things to bear in mind when you start to use the Dreamstation in earnest:

The Dreamstation can do an excellent imitation of old string synthesizers. This patch demonstrates how modulating pulse-width with two different modulation sources, then adding vibrato to all three oscillators, produces a big sound with lots of movement. This is another involved patch: the only unused sections are the User Envelope and Misc controls. Start with Preset 05­Pulse.

A little post-processing with reverb won't hurt; the Sonitus reverb's 'Cathedral' preset is a good choice.

This shows how the Dreamstation 's FM synthesis can produce brass-like 'filtered' attacks, but without the use of conventional filtering. It won't put normal FM synths out to pasture, but it's another facet of the Dreamstation.

Now that you have some sounds, you'll find that following them with a processor or two can add another dimension and still not drain too much CPU power. I like the Amp Simulation effect for a really nasty, industrial sound, while modulation (chorusing, say) adds space. As an example, with the 'String Synthesizer' patch, insert the Sonitus Modulator into the Dreamstation audio path, and call up the 'Slow Ensemble' preset. Set the Mix parameter to about 35 percent and the result wiill be a more spacious, spread-out sound.

EQ can also help. In the case of bass patches, I usually roll off about 4dB of highs with a high shelf starting at about 5-6 kHz, cut mids by a couple of dBs at 500Hz and add some low-frequency boost with a low shelf at about 150Hz.

Check out the Dreamstation tip in Sonar Notes January 2004 (available at www.soundonsound.com). This describes layering two instances, one set for no velocity to provide a constant sound, the other set for considerable amounts of velocity so that playing harder brings in another sound. The end result is a much more dynamic effect. Also see 'Tweaking the Dreamstation' box in Sonar Notes September 2004, which covers using the FM function and the Tape Sim processor.

The Dreamstation offers more automation options than most DXi devices. 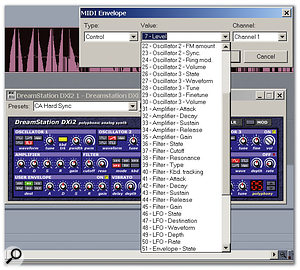 The value drop-down menu not only lets you select an envelope parameter, but also provides a useful reference for which MIDI controllers match particular Dreamstation parameters. For example, Controller 22 controls the Oscillator 2 FM Amount parameter.

Right-click on the MIDI track driving the Dreamstation and go Envelopes / Create Track Envelope / MIDI. The MIDI Envelope dialogue box appears, with three drop-down menus (see screen above). For 'Type', choose 'Control' and you'll be presented with a list of all automatable parameters, along with their matching controller numbers.

(This includes fader boxes and so on). Put the MIDI track driving the Dreamstation into Record mode, then move the hardware knob or slider whose controller number corresponds to the Dreamstation parameter you want to control (or move several at once, for that matter). You can view the list of automatable parameters and their controller numbers via the 'Envelopes' procedure described above.