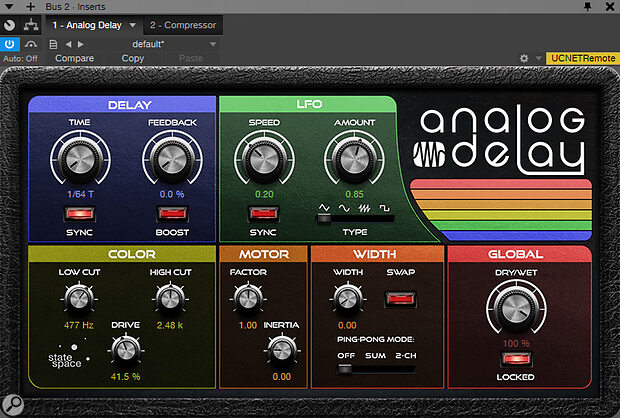 Screen 1: A distorted slapback effect, perfect for adding thickness and grit to vocals.

Analog Delay has been a stock Studio One plug‑in since the beginning, pumping out cool vintage echoes with its previously vanilla GUI, but with version 5 it received a bit of an interface upgrade.

It’s amazing how much difference a little ’70s reskinning can make. I swear that just giving an effect a vintage looking knob makes it sound better to me — and I’m only half joking. Analog Delay looks fantastic in its new threads and so let’s check out what it’s been hiding all this time.

Analog Delay emulates a single‑headed tape delay, and it’s that visual connection to real‑world tape delays such as the Roland Space Echo that brings it to our attention. While multi‑head tape delays bring in their own distinct sound and way of working, the advantage of only having the one head means that Analog Delay works just like any other delay you’ve ever used. It’s easy, straightforward and is going to work brilliantly in far more scenarios and still has plenty of tricks up its sleeve.

Let’s check out the different sections. Delay is where you set the main business of delay Time and Feedback. The Time knob can dial in a delay time of between 1 millisecond and 3 seconds. If you engage the Sync button then the time is expressed in reference to the project tempo. It can range from 1/64th note through to four notes (4/1), and has triplets and dotted notes along the way.

Feedback dictates how much of the delayed signal gets fed back into the delay input. Keep it under 50 percent if you want things to die down quickly or raise it if you are looking for a mass of generative befuddlement. At about 85 percent it starts to build in ever more intense circles. If you hit the Boost button at this point the delay throws itself upon you and gives you a good throttling. Use this with caution, but it’s a great thing to automate for moments of accented madness.

In the Color section we have Low Cut and High Cut, which are high‑pass and low‑pass filters that we can use to hem in the delayed sound. This works just on the delays, not on the original signal, giving us the opportunity to sculpt and place the delay sounds so that your attention is always drawn to the instrument making the sound and not the echoes. Bring up the Low Cut to remove the muddiness of the low end and bring the High Cut down to take out those high transients and edges, leaving a much softer and less protruding echo, unless that’s what you’re going for of course.

The Drive circuit is an upgraded version of the original tape saturation emulation. It makes use of PreSonus’ State Space modelling technology to introduce some nicely gritty saturation.

The LFO section is designed to modulate the speed of the tape flowing across the head. You are usually aiming for something like a pitch drift or classic wobble, which are easy to dial in. The four waveforms (triangle, sine, sawtooth and square) add some nice variations on that theme. But the LFO is also a playground for unexpected results (more below). There’s lots of explorative fun to be had in here but if you leave it up just a nudge it will always add to the sense of a real tape delay.

Motor gives us a chance to fiddle with the tape speed. Reduce the Factor down to half and it doubles the delay length, wind it up to 2 and it halves the delay length. Inertia dictates how long the change in speed takes to occur. So, with a high Inertia you get a wonderfully long chorusing effect as the Motor creeps towards the new Factor setting. It’s brilliant for special effects and creating movement, especially if you start introducing some automation or record your twists and turns during playback.

To make the Width options available you have to be on a stereo track. This is best used on a Bus or Effects track to which you send your guitar, vocal or other instruments. Then you can take advantage of some stereo width improvements or some rather nice ping‑pong action.

That single head makes Analog Delay a really easy plug‑in to play with. You can put it all over the place and enjoy gentle rhythms, modulations and craziness wrapped up in a warm vintage glow. It’s an enjoyable place to play. Here’s some ideas to try out once you’ve finished fiddling with it.

If you turn the Time all the way down so it’s at its fastest, the LFO can become quite a nice vintage‑style chorus or flanger effect with the triangle or sine wave options. With the square wave it can become more of a tremolo and starts getting very spacey as you wind up the Feedback and back off the LFO Speed. It’s great when controlling things manually but once you set up some automation and start feeding it some possibilities then it really comes alive.

Distorted slapback (Screen 1, above) is perfect for adding energy and edge to a vocal track. Put Analog Delay on a Bus at 100 percent wet, and send the vocal track to it. Turn the delay Time all the way down to 1/64th note and then start to push the Drive up until you get a sense of gritty sparkle. Experiment with the feedback but don’t go too far or you’ll start to pull in a metallic ring that might not be what you’re after. Bring in the High Cut and Low Cut to sit the delay behind the vocal.

Here’s a trick for adding interest to your kick and snare by adding some bounce. With Analog Delay inserted on your drum bus, set the Time to a dotted 8th, bring the High Cut down to shave off the cymbals and hi‑hats, and bring the Low Cut up to reduce muddiness. Dial the Mix down to keep it subtle and you’ll be surprised at how lively things become. 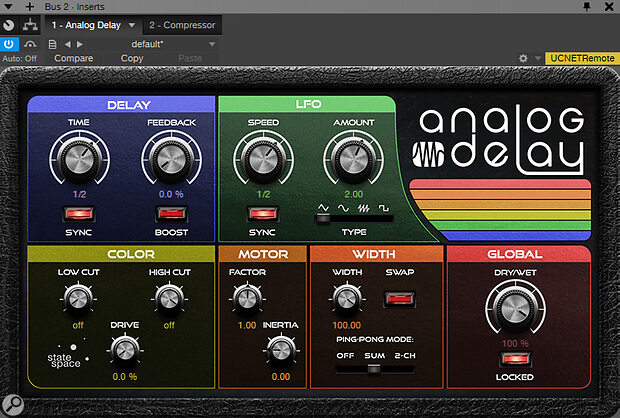 The settings shown in Screen 2 emulate a vintage delay trick, apparently used by Queen, that is fabulous for throwing your voice about the place. Set the Ping Pong to Sum and set the delay Time to half a bar and the Feedback to zero. You can turn off the High/Low Cuts and Drive because you’re looking to duplicate your vocals. Now sing a few notes and you’ll be treated to your voice being thrown back at you on the left and then the right. If you start to harmonise in a round with yourself it will quickly become glam‑rock heaven. 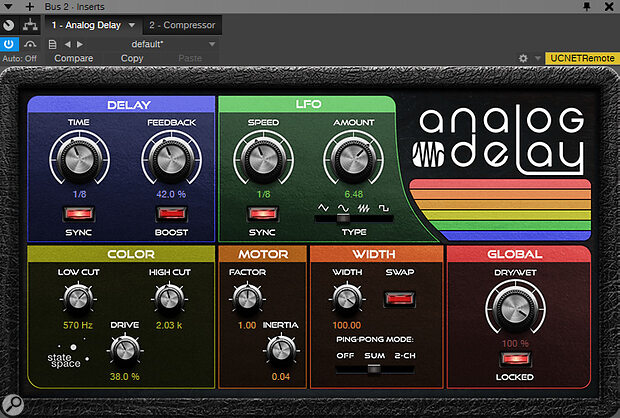 The classic Electro‑Harmonix Memory Man delay pedal sound is relatively easy to find with Analog Delay (see Screen 3). Put it on a bus rather than as an insert so that you can add some reverb to the delayed sound. Set it to 1/8th time and dial in some LFO modulation, also set to 1/8th note. Set the width to maximum. Bring in the High and Low Cut to soften the delayed sound, and then start to push up the drive. That should do it.

And finally, an experiment with side‑chaining. Insert Analog Delay onto a bus again, so that we can process the delay sound without processing the original vocal. Add a compressor after the Analog Delay and set the side‑chain input to the vocal track (see Screen 4). Now when the singer is singing the delay effect will be compressed and less prominent, but once there’s a gap or a stop in singing the delay comes back at full force. It stops the vocals sounding muddy or overwhelmed with delay and lets it come through in the spaces. 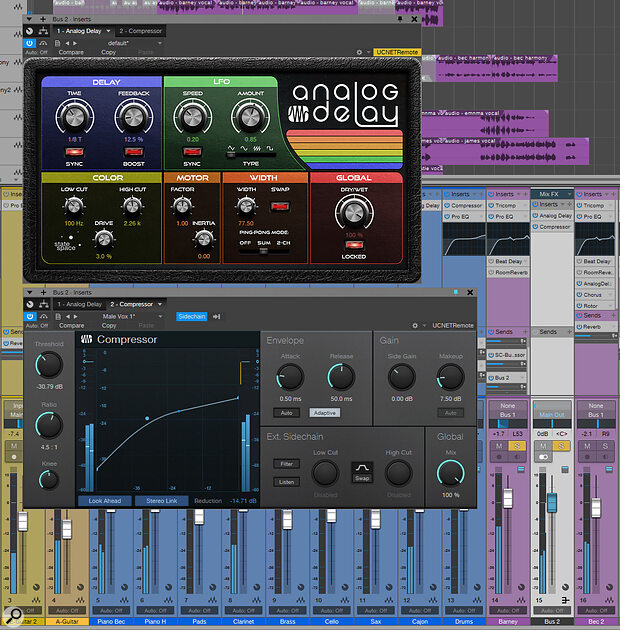