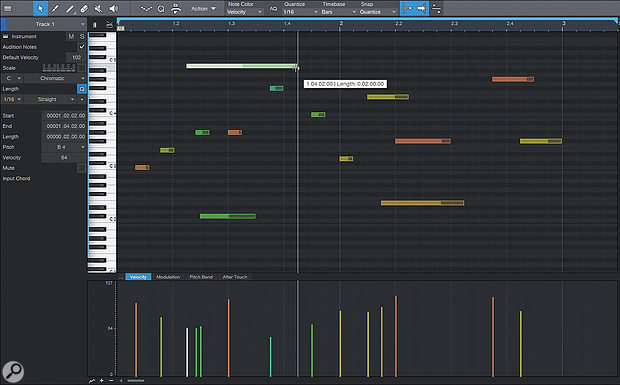 In the Music Editor, note velocity is represented by the vertical bars at the bottom of the piano roll.

This month I'm going to take a look at the humble piano-roll editor, one of the longest-serving computer-based MIDI tools and perhaps the least celebrated. In Studio One, it goes under the name of the Music Editor. I'll highlight some of the tools and functions that make this an awesome place to compose and edit your music, and along the way we might hit upon something you haven't seen before.

First, a quick explanation. The basic premise is that any MIDI notes that you've recorded into a track can be displayed on a grid that represents time going from left to right, with pitch on the vertical axis. This vertical axis isn't just labelled with note names: it shows a piano keyboard displayed on its side. As it plays, it looks like a paper roll from a player piano, hence 'piano roll'. It's a remarkably useful alternative to a written score, and can convey similar information plus more besides.

The beauty of having this data on a computer is that it can be edited. Notes can be altered in pitch, time and length, and new ones added on-screen with the stroke of a mouse. So, let's see what's in Studio One's Music Editor toolbox...

The Arrow tool is your starting point: it lets you select notes and move them about. Click and drag a single note to change its position in time or pitch, or draw a box around some notes to use commands such as copy, cut and paste, and drag them about as with a single note. A shortcut to the copy/paste action is to hold the Alt key (Mac: Opt), drag out a duplicate of the currently selected notes, and drop them where you want.

As you place the Arrow at the front or back of a note the pointer changes to the Sizing tool, and you can click and drag to extend a note either backwards or forward in time. Perhaps a lesser-know Sizing option is the ability to automatically resize adjacent notes so that you don't overlap them and they maintain their closeness. For this to work, the notes must be adjacent in time so that one note ends as another begins. Hold the Alt key and as you extend the length of one note, the adjacent note is shortened by the corresponding amount.

There are a couple of other useful key modifiers. If you hold Ctrl (Windows) or Cmd (Mac) with a group of notes selected, they will all jump to the same size as the note you're resizing. If you hold Alt, it drags the contents of the part in time relative to each other, extending some notes and squashing others. Holding Alt+Ctrl (Windows) or Opt+Cmd (Mac) and clicking on the end of the note makes the end of all the selected notes jump to that same point.

You can add notes with the Arrow tool by double-clicking. The size is dictated by the current Quantize setting, which you can also see as the background grid size. You can delete notes with a double-click, too.

Rather than doing all that double-clicking with the Arrow tool, it's better to select the Paint tool for adding notes. Holding Ctrl (Mac: Cmd) temporarily turns the Arrow into the Paint tool. There are a number of Paint tool options that appear in the drop-down list but they are only relevant to the automation lanes at the bottom of the Music Editor, which we'll come to in a bit. So, with any Paint tool selected, you can add notes with a click. Again, these follow the grid size whether snap-to-grid is on or not, although you can resize notes when in Paint mode to any length you like. You'll also notice that your pointer turns into an eraser when you hover it over an existing note. One click deletes it.

If you hold Alt while over an existing note, you can edit the velocity by dragging up and down. Notes are usually entered with a velocity of 100, but this can be changed over in the information bar on the left of the piano roll. A lesser-known function is that holding Alt when entering a note allows you to draw a slightly weird line of notes that starts at the point you clicked and follows the movements of the cursor. This is useful for creating note runs.

The Eraser and Mute tools are fairly self-explanatory. Click on individual notes or selected notes with the Eraser tool to delete them, or click and drag in space and you'll delete any notes you encounter. Same thing with the Mute tool, except that it changes the status of the note from unmuted to muted or vice versa.

The Split tool splits notes into two separate notes at the point of click, or the nearest grid line if snap is turned on. If multiple notes are selected it will split all of them at that same point. Holding Alt will split the part you are working on, rather than the notes.

The automation lane handles all sorts of parameters that you can apply to notes in the Music Editor. They display a MIDI parameter — velocity by default — directly beneath the notes. Velocity is unique in that it shows a single value for the starting point of each note as a vertical line or stalk. Other automation parameters such as modulation, pitch-bend or aftertouch are continuous controllers and so are displayed as a changing horizontal line, curve or shape. Pressing the three little dots to the left of Velocity lets you add any available MIDI parameter from the instrument you're using, so things like filter cutoff and other synth parameters are all fair game.

To change the velocity of a note, click on the corresponding stalk and drag up and down. As you do so the note will play repeatedly, which is very helpful, but if you find that annoying you can untick the Audition Notes box in the inspector panel on the left. Select multiple notes and you can change the velocity of all of them together. Press Ctrl (Mac: Cmd) and they will all jump to the velocity of the stalk you are clicking and dragging on.

You may often encounter a problem with selecting the correct velocity stalk when you have notes of a chord starting at the same time. The stalks overlap each other, and when you click to move one you move them all. This may be what you want if you are trying to change the velocity of a played chord, but if you hold Alt then your dragging only affects the root note. To edit another note in the chord you'll need to click to select the note you want to change first, and then you'll only be moving the velocity of that note. But perhaps the fastest method is to click and drag on the note itself while holding Ctrl+Alt (Mac: Cmd+Opt).

One other tip to help you identify velocity in crowded spaces is to change the Note Color option to Velocity, which you'll find in the menu bar across the top. This is my favourite view as it gives a visual indication of expression while I'm editing.

This is where all those alternative paint tool options come into play. With the standard Freehand paint tool you can draw across the automation lanes to quickly edit velocity on all the notes you pass, or draw in modulation curves and changes however you like. But the other options give a more precise approach and some quite interesting possibilities. Although they all work with the Velocity lane, they are probably easier to see and understand on a lane like Modulation.

The Modulation lane lets you draw in lines, curves, and LFO-like automation shapes.

The Line tool lets you click and drag to draw a straight line. You could see it as a fade-in or fade-out of velocity, or a gradual increase in the depth of modulation over time. Parabola does a similar job but with a curved line. Pressing Alt or Ctrl (Mac: Opt or Cmd) flips the axis of the curve. The next four — Square, Triangle, Sawtooth and Sine — could be seen as LFOs. As you click and drag, the waveforms are drawn in line with the current Quantize value, regardless of whether or not snap is enabled. Holding Alt allows you to override the grid and begins to expand or squash the waveforms as you drag. Holding Ctrl lets you offset the phase from the grid. You can really get the modulation to be exactly as you want it.

These tools offer some seriously entertaining transformations to the parameters of your MIDI instrument.

Once you release the mouse, each change in the line will have a node that can be edited with the Arrow tool or by holding Ctrl while using the Paint tool. Double-click to add further nodes. If you hover between any two nodes, a handle appears that you can drag to add a curve to that line. You can select a number of nodes by holding Alt when using the Arrow tool, and them move them together.

The Transform tool lets you manipulate your automation in a number of powerful ways, including stretching and contracting.

The Transform Paint tool is very interesting and looks like it was borrowed from Photoshop. With the Transform tool selected, you draw an orange box around any section of data in the automation lane. The box has handles that let you manipulate the nodes or stalks within. Pulling on the top or bottom handle scales the contents down about the centre. Hold Shift to release the centre and scale to the top or bottom. Dragging on a corner handle distorts the data by squashing or expanding that end. Again, this happens about the centre unless you hold Shift. The handle on the side of the box lets you expand the data and skews it up or down without squashing it.

These tools offer some seriously entertaining transformations to the parameters of your MIDI instrument. It should be noted that these are specific to the MIDI part you are editing. They are contained within that part and are shown over the top of that MIDI part in the track. They do not appear or form part of the automation tracks, so whatever filter modulation you've added in the Music Editor automation lane is not represented if you create an automation track tied to the same parameter in the arrangement window. They both work, but with the automation from the piano roll overriding the automation in the track. I had hoped that perhaps the track automation could work as an offset for the part automation, but this doesn't appear to be the case.

The automation within the instrument part could be seen as superfluous, because you can do all the same things in an automation track in the main window. However, I like the way it's all tied into the placement of notes and how the workflow lets you work on the tune at the same time as the modulation of parameters. Automation in the main window is perfect for audio tracks, but with MIDI it feels somehow divorced from the notes, which is where the Music Editor is a much better choice.