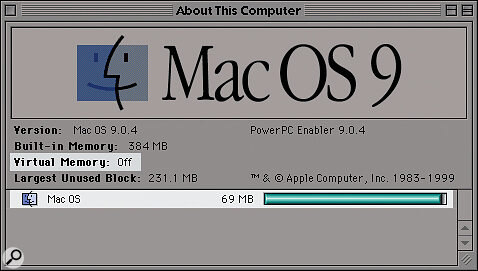 Vic Lennard signs‑off as SOS Apple Notes columnist with a look at VM.

A new year — and a new Apple Notes columnist. As I'm now working full‑time as Production Director at a local publishing house, there are just insufficient hours in my day for me to continue with this column. So, after 10 months of sitting in the hot seat, I'll be handing over to Paul Wiffen, a writer whom all Mac music users will be aware of.

Last month I promised to try to demistify virtual memory (VM), the method by which part of your hard disk is used in place of real RAM. Controlled via the Memory control panel, the turning‑on of VM has been the subject of numerous horror stories involving stable setups that suddenly crash inexplicably. The advice generally given regarding virtual memory is 'use VM of RAM plus 1Mb', so let's look at the facts. 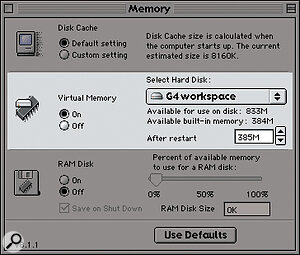 ...turn on VM in the Memory control panel...

Virtual memory is used to keep the most frequently used data in actual RAM and the least frequently used data on hard disk, switching (or 'paging') data between the two, as required. Ideally, this needs the dramatically improved level of memory management of OS 8.1 and beyond. However, enabling VM on a PowerMac also brings in a secondary feature: file mapping. As PowerPC executable code is kept in a separate part of the program (the data fork), file mapping writes this code to hard disk and uses it as necessary. The result? Less memory required to run an application. To see this, choose an application with PowerPC code and use 'Get Info' to see the memory requirements — there's a note regarding how much memory you save if VM is active. Another positive side‑effect is that applications tend to load faster.

Unfortunately, there is no way of turning on file mapping while leaving VM turned off! The closest to this is to use the minimum amount of VM (1Mb above actual RAM) hence the advice you tend to be given when using a PowerMac. 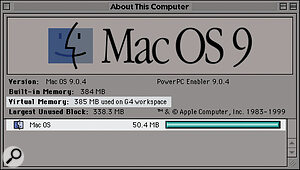 ...and reduce the system to 50Mb after rebooting.

Anyone who's installed OS 9 will no doubt have noted the huge increase in system memory. For instance, a quick look at the 'About This Computer' box on my machine shows a whopping great system usage of 69Mb — yet turn VM on and this reduces to just over 50Mb (see the screenshots below).

One reason for the memory hogging is the large increase in available file slots, from 384 to over 8000. You may think you're unlikely to ever have more than, say, a couple of dozen files open. Wrong! Download List Open Files, a freebie from (www.alsoft.com), and you'll be surprised. With just Microsoft Word running, the report came back with 249 open files! Why? Because each system extension and font counts as a file. Anyone using a large font list and a number of concurrent applications really needs to upgrade to Mac OS 9.0.4 for this feature alone.

Though not a music program, Adobe Photoshop is the oft‑quoted example of why not to use VM. Though Photoshop has its own version of VM with its scratch disks, as long as your system's VM isn't used there shouldn't be a problem. You can do this by setting Photoshop's memory usage to 'total RAM less system memory less about 10Mb'. This retains the file mapping side but ensures that VM paging doesn't come into play.

So VM is the way to go. Well not quite. Numerous music programs, including BIAS Peak, Digidesign Pro Tools, Cubase VST, MOTU FreeStyle and Digital Performer won't even launch if VM is turned on. Additionally, there are serious video sync problems with something as simple as the Apple DVD Player. Even the Mac OS platinum sounds (part of the Appearance control panel) are out of sync as you run up and down the Apple Menu Items!

There are incalculable combinations of computers, extensions, programs and so on. Even the kind of hard disk being used (SCSI or ATA) can affect the situation. Perhaps some people are luckier than others. Personally, I tend to avoid using VM but I have to admit that some applications behave better than others.

And what of OS X? As this is based on UNIX, all memory is managed as a pool by the OS rather than being reserved by an application on launching. VM is active all the time for native applications and, apparently, very reliable. We'll just have to wait and see. 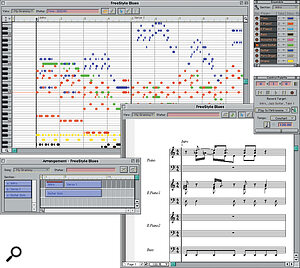 As a parting gift, here are my final pearls of wisdom:

Finally, keep an open mind where OS X is concerned. By all accounts, this could be the most positive Mac move forward since Mac OS 7 said goodbye to Multifinder. Oh, and don't forget the bottom line — make music... 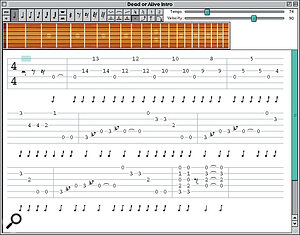 Input and play back tablature with GuitarTab — and you even get five solos to start with.

The International English version of the Apple Modem Updater supports the internal modem in the Powerbook G3 Series, iMac, Power Macintosh G3 (Blue‑&‑White) and Power Macintosh G4 (PCI and AGP) computers. It contains new modem firmware and an updated AT command set. As there is no way back to the previous firmware once updated, take care to read the relevant technical information pages in the Read Me file. Software Update 1.2 provides enhancements that deliver Apple software updates faster over the Internet. Download both from (asu.info.apple.com).

Top of the demo list this month has to be the MOTU FreeStyle 2.31 demo (www.motu.com). This trackless sequencer, incorporating music notation, is well worth a try — especially as it includes a special edition of DrumTrax, the beat library. The demo does not allow you to save files, limits Riff Metronome patterns to four bars, and only allows you to print the first page of a score with the phrase 'FreeStyle v2.3 Demo' overlaid.

Beatnik software works with web browsers and other programs to make interactive music and sound possible. The demo of Beatnik Editor (www.beatnik.com) lets you experiment with the live MIDI Synthesizer but is Export‑, Open‑ and Save‑disabled.

The latest version of SoundJam MP Free 2.5.2; (www.soundjam.com) has improvements to the Internet tuner, drag‑and‑drop support and AppleScripting, better encoding and various bug fixes. Try it in its entirety for 14 days .

Three items on the MP3 front this month. BladeEnc (www.helsinki.fi/~pkamppur) is the Mac port of Tord Jansson's encoding engine and can create MP3 files from AIFF, WAV and raw PCM files. It's also completely free. MP3 Title Fixer 1.3 (www.sheller.org) is a neat little utility that renames MP3 files using the title in the ID3 header while adding the '.mp3' extension. Saves a lot of typing!

Album Manager for SoundJam MP (homepage.mac.com/thewonderboy) started out as a simple AppleScript to automate track naming but quickly grew into a much larger project that now includes a host of useful utilities. It automatically renames files in the Finder, pulls track names from a text file, generates track numbers, creates a buffered playlist for export to Minidisc and changes between upper, lower and title case. It even provides search and replace text functions for Title, Album, Artist and Comment fields.

Two goodies for guitarists as well. Guitar Sidekick 1.0 (www.guitarplaying.com) is an essential tool for all players — pick a key and scale‑type and let the animated fingerboard do the rest. The web site is also a useful source of guitar info. And if you work with tablature, you'll definitely want to take a look at GuitarTab 1.01 (members.nbci.com/gregrclayton/guitartab) which allows you to enter guitar solos in tab format and play them back. Comes complete with five rock solos.