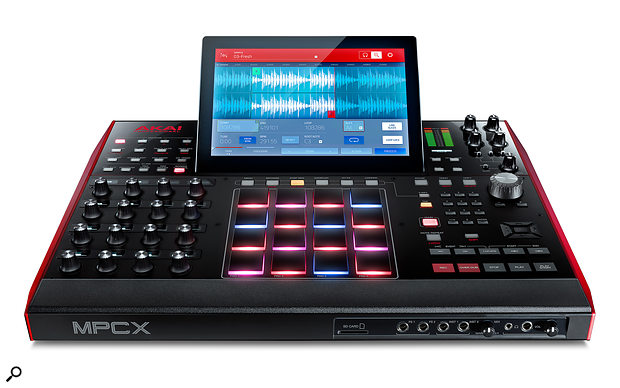 In recent years Akai's reigning champ of hardware sampling, the MPC, has become increasingly reliant on an external computer to function. Since the MPC Rennaissance — a control surface-cum-audio interface designed to work with the MPC software running on a Mac or PC — the focus has been on computer integration, ranging from the controller-only MPC Studio and MPC Element to the no-hardware-at-all iMPC iOS apps. Now Akai have come out swinging with two new MPCs boasting knockout looks and heavy-hitting features. Best of all, while the MPC X and MPC Live are perfectly capable of controlling the new MPC 2.0 software, they are fully functional stand-alone production stations in their own right.

If the compact MPC Live looks familiar, that’s because the control layout is exactly the same as last year’s MPC Touch controller/interface, with a seven-inch full-colour multi-touch display, 16 backlit pads, four rotary encoders and a master encoder knob. The big difference is stand-alone operation, with 2GB of sampling RAM and 16GB of on-board storage. Users will be able to expand the device’s capacity by fitting a 2.5-inch SATA drive to the device, which also features its own built-in rechargeable li-ion battery, creating the potential for an incredibly powerful and portable music-making machine. Other features include RCA phono inputs and a ground peg for attaching a turntable, two pairs of MIDI inputs and outputs, an SD card slot and two USB 3.0 ports for thumb drives or MIDI controllers.

Meanwhile, the MPC X is without a doubt the new flagship of the range. With a 10.1-inch multi-touch screen, 16 pads, a host of dedicated function buttons and 16 rotary encoders with their own individual mini OLED displays, the MPC X looks fully equipped to give new meaning to the acronym ‘Music Production Centre’.

Not only does it boast all the new features of the MPC Live — including 16GB on-board storage, a SATA drive bay, turntable connectors and two USB 3.0 ports — but it also provides CV/Gate outputs for controlling modular gear, plus four MIDI inputs and two MIDI outputs. Like the MPC Live, the MPC X runs the new MPC 2.0 software in stand-alone mode but can also act as a controller when tethered to a Mac or PC. The new software promises audio recording, an improved time warp algorithm and a new GUI with drag-and-drop functionality for both audio and MIDI.