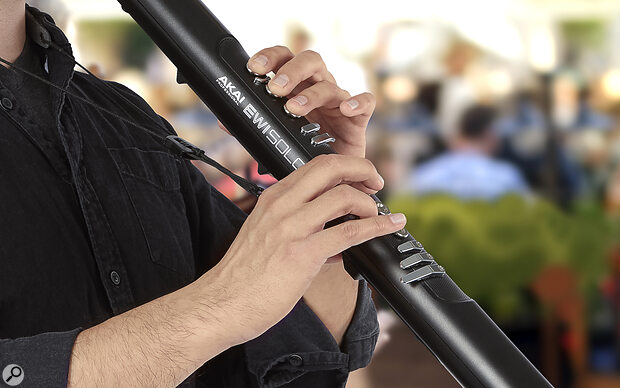 Akai's EWI family of electronic wind instruments has just gained a new member, in the form of the EWI Solo. The new model is described as “the most portable EWI to date”, thanks to its combination of rechargeable battery, built-in sounds and integral loudspeaker.

The 200 onboard sounds apparently cover every genre, and include realistic wind instruments (a “sultry jazz clarinet” is cited) as well as electronic sounds including synth pads. Naturally, effects are present too, including reverb, chorus and delay.

In addition to its built-in speaker (which Akai say has been specifically voiced for natural sound reproduction), the EWI Solo's output can be accessed via a headphone mini-jack or quarter-inch output socket. And, like previous EWI instruments, a USB port lets you use it to control software instruments via MIDI.

The EWI Solo will be available later this year, and will carry an RRP of £399.99.