Published 17/9/22
For podcasters, video makers and live streamers as well as musicians 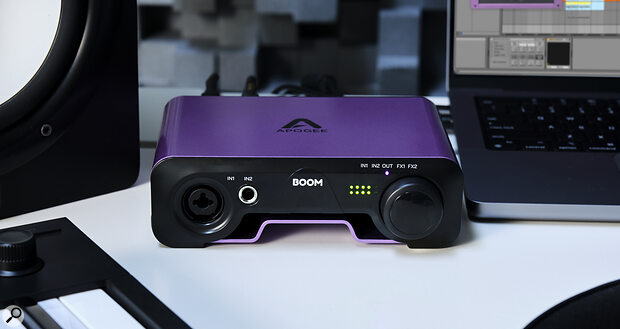 BOOM from Apogee is a brand-new 2x2 audio interface that works with macOS, iOS and Windows. Aimed at multimedia creators, podcasters, video makers and live streamers as well as musicians, BOOM includes built-in hardware DSP, a mixer and Loopback mode. 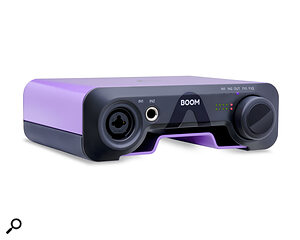 In a tough steel casing with rubber feet, one balanced jack input and a balanced combi input, BOOM can record digital audio at up to 24 bit/ 192 kHz. The mic preamps offer up to 62 dB of gain, and the inputs will accept a maximum level of +18 dBu. It is powered from a USB port and Apogee kindly include a USB-C cable in the box. BOOM also has built-in features from their Symphony ECS Channel Strip plug-in. This DSP was developed with help from long-term collaborator Bob Clearmountain. You can shape and sculpt your input sources with a 3-band EQ, compression and a drive knob that adds warmth and grit inspired by analogue gear.

Listening back is handled by BOOM’s zero-ohm headphone output in addition to the left and right balanced jack outputs. A mixer function and Loopback mode allow you to mix audio coming from different sources on your device. Apogee state that BOOM works with any audio recording application on macOS, iOS or Windows and with the Apogee Control 2 app can connect directly to iPad Pro.

Apogee BOOM is available now, priced at $299£329 RRP including VAT.