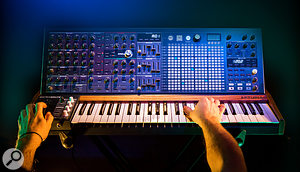 At the 2016 NAMM show, Arturia are launching their grandest and most advanced analogue synth to date – the extraordinary new MatrixBrute Analogue Synthesizer.

The 49 key MatrixBrute builds on the legacy of Arturia's enormously popular MiniBrute and MicroBrute analogue synthesizers. The deep yet hands-on architecture puts extraordinary amounts of analogue sound design and modulation into the hands of the musician in an instant, visual and tactile way – with 256 capacity preset storage to save your creations.

Under the hood, the MatrixBrute sports two complex analogue VCOs, one core VCO/LFO, with extensive FM and Sync inter-modulation. It features two multimode filters — the aggressive Steiner Parker (as featured on the other Brutes) combined with a classic Ladder filter design, and both can be routed in series or in parallel. There are no less than three envelope generators, and two dedicated and syncable LFOs, and the most striking element on the panel…a 16x16 modulation matrix for vast and complex modulation routing, but with clear visual feedback. With the four flexible "User" Matrix destinations, nearly any panel control of the synthesizer can be modulated. And MatrixBrute is Monophonic, Duophonic and three-note Paraphonic.

MatrixBrute is analogue at heart, therefore beyond standard MIDI, USB and studio audio connectivity, it features 24 CV connections on the rear panel allowing extensive interfacing with compatible analogue synthesizers and modular systems. Its matrix panel also doubles as a visual control interface for the interactive 64-step sequencer provided onboard, and panel controls both send and receive MIDI information for computer automation possibilities.

Top top it off, MatrixBrute features a wide-ranging multi-stage analogue BBD delay section, allowing for extraordinary effect design, ranging from classic analogue delay to choruses, flangers and more. This section can also be extensively modulated and forms an integral part of the sound engine. Combined with audio inputs and the Envelope Follower, MatrixBrute becomes a powerful external audio processor as well as an attractive analogue synthesizer.