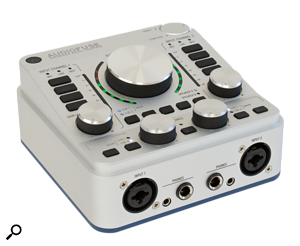 Arturia’s long-awaited debut audio interface, the AudioFuse, is now shippping. Since its announcement over two years ago, it seems the R&D team at Arturia have been busy rigorously testing and refining the AudioFuse to get it to this point. Now, the company is happy to claim that it will turn the interface market on its head.

The AudioFuse is an all-in-one 192kHz/24-bit capable audio interface for work in the studio, on location and on stage. It sports 14 ins, 14 outs, of which four are analogue — two mic/line/instrument inputs and another pair of phono/line inputs. Arturia also claim that their custom-designed 'DiscretePRO' preamp with optional analogue soft-clipping offers "the lowest signal-to-noise ratio in its category.”

All of the AudioFuse’s many connectors are on the body of the unit, meaning no breakout cables, except for MIDI I/O. Along with the previously mentioned I/O there’s also two analogue inserts, ADAT I/O, S/PDIF in and out, Word Clock I/O and a three-port USB hub.

What really stands out is the fact that this desktop device has virtually every control that you’d want from an audio interface, right there as a button or knob on the device itself. There’s a computer/direct mix knob, input gain knobs, per-channel +48V, phase invert, 20dB pad and instrument input buttons. Then there are twin headphone output level knobs for the two separate headphone outs. Each can be assigned to Master or Monitor, too, so performer and engineer can have their own mix. There’s a talkback button for studio communication, as well as mono, dim, mute, speaker A/B buttons and a big output knob — essentially all the most important parts of a monitor controller.

There are some other neat touches, such as having four power modes so you can save laptop battery life when you’re on location — or use a PSU when you’re back in the studio. It will work with PC, Mac, iOS, Android and even Linux. And it also has a lid so you can set and forget levels when playing live. It’s available now for £509/$599. We look forward to trying one as soon as we can get our hands on it.

Field Music: Building A Track In The Studio
4 weeks 6 min ago.