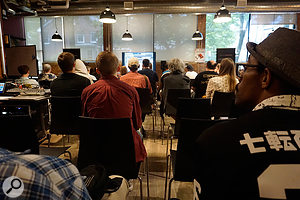 Attendees during Thavius Beck's music production masterclassThis weekend saw music tech extravaganza Music Expo hit New England for the first time with Music Expo Boston — hosted by iZotope at their impressive headquarters in Cambridge, Massachusetts. The show is the second of three Music Expo events to visit cities across the USA, following last month’s enormously successful Miami event. The Boston event was at full capacity with over 200 attendees, ranging in experience from students and weekend warriors, through to professional producers, recording engineers and musicians.

With a jam-packed day of seminars, workshops, tutorials and gear demos covering a vast range of topics, and featuring brands such as Yamaha, Ableton, Unity Audio and iZotope, there was something for everyone.

Elyssa Nicole Fontes kicked the show off with her 'Performance with Backing Tracks' and surprised the organisers by bringing her band, to the delight of the attendees. Jonathan Wyner from iZotope led a packed workshop entitled Demystifying Mastering, and everyone got a chance to bring their own demo or track and listen to them through The Boulders — Unity’s Audio three-way monitors — in iZotope’s high-end mastering room.

There was standing room only for artist/producer Thavius Beck (Saul Williams, NIN) who ran his music production masterclass showing off some interesting new ways of interacting with a DAW using the touch and pen features on a Microsoft Surface. New-England native, SF-based producer Decap  (Talib Kweli, Snoop Dogg, Ne-Yo) educated and entertained with his two presentations: one that focused on making a beat from scratch saw everyone jamming by the end of the session. 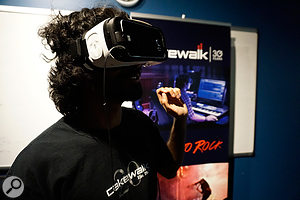 VR demo at the Cakewalk boothDigital met analogue, too, with VR and social media making the agenda alongside a panel discussion looking at the building and maintaining of analogue studio gear. Jeff Straw from Pyramind delivered his seminar to an attentive crowd on the importance of building a brand for artists on social media platforms. Alex Westner (Cakewalk’s VP for Product Strategy and Innovation) addressing an enthused, young audience, discussed the current VR platforms and challenges for audio developers. The day was rounded off with a late addition to the schedule: ‘D.I.Y. in the Recording Studio’ a fascinating panel discussion hosted by recording engineer and D.I.Y electronics guru Owen Curtin.

Alexandra Morgan from iZotope enthuses: "Music Expo is a truly special event that brings together a wonderful community of people. Attendees are curious, open-minded, and diverse, and we here at iZotope feel lucky to be a part of it. There are many great events to attend in the music industry, but few are as unique as Music Expo.”

Attendee Carlos Curry adds "Music Expo at iZotope Studios was what I needed, being surrounded by the industry's sound developers was overwhelming, there was so much to explore and learn... I gained so much knowledge It felt like an audio student again, can't wait for the next one. "

After its first outing in Miami and Boston, Music Expo returns to its roots in San Francisco on November 11. Pre-registration is $15 until August 31, and $35 thereafter.