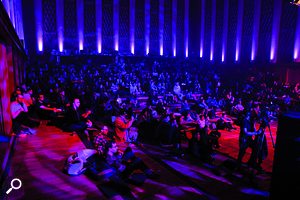 From Friday 10 to Sunday 12 November, Ableton presented their annual summit for music creators, Loop. Housed at Funkhaus in Berlin — the historical former broadcasting headquarters of the GDR state radio — the event was a smorgasbord of performances, workshops, track deconstructions, panel discussions, tutorials, listening parties and roundtables. Sessions ranged in scope from dissemination of immediately applicable techniques such as the use of polyrhythms and how to actively listen as a sound designer, right through to conceptual topics and presentations of cutting-edge research into machine learning, AI, tinnitus remedies and more. 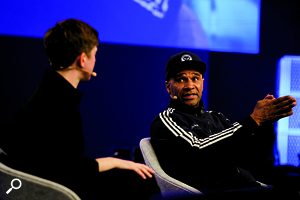 Among the big names on the line-up were Goldie, Mandy Parnell, Susan Rogers and Gilles Peterson. There was no shortage of up-and-coming artists and producers either, with performances and discussions with brother-sister performance duo Tennyson and electronic maestro Caterina Barbieri. 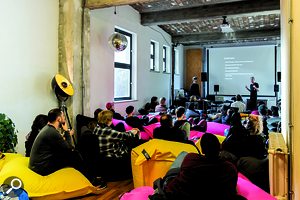 Some particular highlights were a replaying of the golden disc that was sent out on NASA’s Voyager probes with commentary from author Jace Clayton and Minh Lee (NASA); a demonstration of the capabilities of AI in the analysis and generation of music with Nick Collins; a fascinating insight into the world of esoteric mechanical instrument maker Koka Nikoladze; a presentation of making drum n bass for Dolby Atmos systems from producer Metrik; and a totally heartfelt and inspiring conversation with Prince’s former engineer turned doctor of psychology, Susan Rogers.

Rounding off daytime programming on the final day was a hugely entertaining panel discussion on how musicians can turn YouTube to their advantage featuring prominent online educator Adam Neely of New Horizons in Music, Grammy-nominated topliner-turned live electronic performer Rachel K Collier and Canadian musician Andrew Huang whose pun-based cover versions and slick editing have earned him over a million YouTube subscribers. 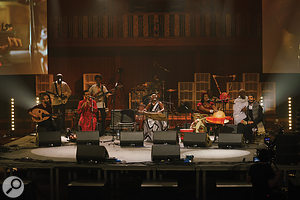 The Nile Project at LoopThe performance programme was equally impressive with the likes of Nosaj Thing, The Nile Project, Jenny Hval, Sorne and others electrifying the historical recording spaces of the Funkhaus. One of the most noticeable features was the palpable positivity that permeated almost every corner of the complex during Loop. This was fed by the range of people present, attending hands-on workshops and studio sessions encompassing topics including sound design, bass management, mastering, lo-fi recording, randomness in creativity and brainwave stimulation. Add to that a collection of audio and visual installations, an exhibition space giving attendees a chance to play with the latest gear from top brands and its apparent why Loop is oversubscribed every year. 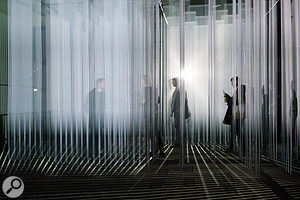 3Destruct by ANTIVJ at LoopIf Loop can be taken as a gauge of ingenuity within the music production world, there’s a lot to be excited about. We eagerly await the next.