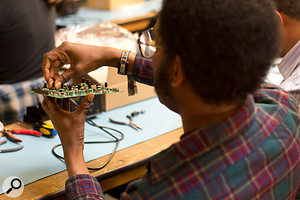 The synth-building workshop at Moogfest 2014When Moogfest was launched in 2004 in New York, it was a relatively small affair that attracted a few hundred people to a synth clinic at Manny’s Music followed by a celebrity gig at B.B. King’s Blues Club & Grill. It has grown significantly since then, and this year’s festival, held over five days from 23 - 27 April in the remarkably welcoming city of Asheville in North Carolina, was on a totally different scale to previous events. With more than 100 musical acts performing across the city, 80 presenters holding workshops, performing demonstrations and conducting interviews, plus film presentations, a modular synth marketplace, and even the opportunity to build your own Moog synthesiser in a series of engineering workshops, it was perhaps the largest electronic music/synth event ever held. 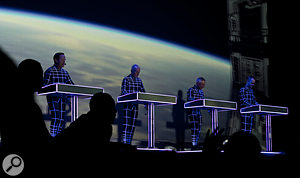 Kraftwerk's audiovisual extravaganzaThe range of activities was staggering, and I very much doubt that anybody managed to attend everything that they had hoped to see and hear. Sure, everybody knew of the Pet Shop Boys’ and Kraftwerk’s shows, and there wasn’t a single empty seat at events such as The Keith Emerson Band’s concert or the Bernie Worrell Orchestra gig that followed, but you could also peer into the cracks between headline events or trust in serendipity to find other gems. I met Dorit Chrysler on a bus one morning and, having done so, went to see her sing and perform on Theremin and Taurus 3 pedals (I’m not kidding!) which proved to be a rare treat. Likewise, the Durational Performances at the Centre for Craft, Creativity and Design were a pleasant surprise, and their evolving soundscapes were a wonderful antidote to the almost ubiquitous TR909 (-style) thumps heard elsewhere across the city.

As the festival closed, I spoke to Moog Music’s President, Mike Adams who told me, “When we moved the factory to Asheville in 2010, we decided that it would be better to hold the festival here rather than in New York and, over the five days, we’ve filled the town with people from all over the world. When I’ve seen how vibrant the city has been for the past few days, it has been exhilarating. I can definitely see us doing it again.”

Emmy Parker, the brand director of both Moog Music and Moogfest added, “Lots of festivals and conferences are narrow and specialised, but we wanted to bring together musicians, mathematicians, physicists, artists… anyone interested in new technologies, creative expression and communication, and have them leave here feeling inspired. I think we achieved that. The Police Dept estimate that 16,000 people attended the free stage on Friday, and there were a further 7000 badge holders in the city at any one time. It has opened our eyes to the impact that an event like this can have.” 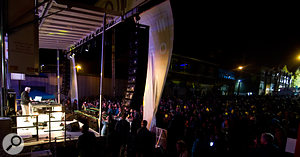 Giorgio Morodor on stage in the centre of Asheville, NC

Happily, the community has also embraced Moogfest, with financial support from the city and the county governments, 27 local sponsors and a further 18 corporate sponsors from further afield. If there’s a criticism (and there’s only one) it’s that the sound levels at some of the gigs and DJ events were quite extraordinary. Sure, we all like it loud but, from behind the protection of my ear-plugs, I felt quite uncomfortable watching people risking damage to their hearing. But don’t let that detract from Moog’s achievement, which is all the more remarkable when you consider the size of the company. I spoke to attendees from as far afield as Germany, Japan, and Australia, and all were delighted that they had come. I made some new friends, and was able to spend time with existing ones with whom I had swapped emails for years, but never met ‘in the flesh’. If you’re a synth aficionado and if Moog can continue to organise events on this scale, you should certainly consider going. I very much doubt that you’ll be disappointed.