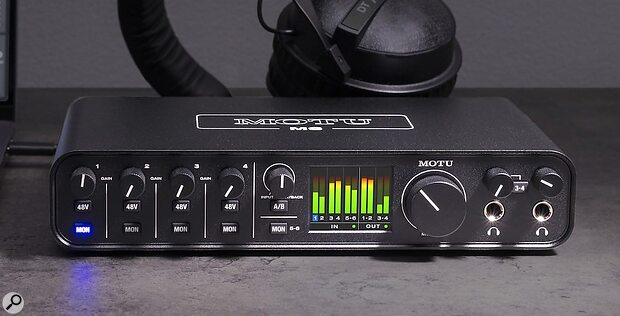 The interface’s conversion is carried out by ESS Sabre32 Ultra DAC devices, which help to achieve a dynamic range figure of 120dB (A-Weighted) at the main outputs, and provide headphone outputs which MOTU say rival the performance of dedicated headphone amplifiers costing hundreds. Preamp specifications are also impressive, with the company providing an EIN figure of -129 dBu.

The M6 offers direct hardware monitoring of all inputs in both mono and stereo, and also features low latency performance when monitoring sources via a connected computer, with MOTU’s drivers allowing the device to deliver Round Trip Latency times of 2.5ms. Stand-alone operation also means that monitoring for all inputs is possible without a computer connected. 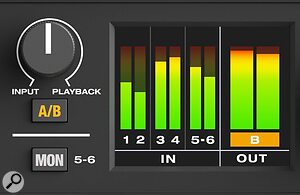 The interface is also equipped with a Loopback feature, allowing system audio to be routed through the device and mixed with up to four connected microphones or instruments for live streaming or podcasting purposes.

A software bundle is included with the purchase of an M6, consisting of MOTU Performer Lite, Ableton Live Lite, over 100 virtual instruments, and 6GB of loops and sample packs.

The M6 offers four microphone/line-level/instrument inputs via XLR/TRS combo sockets placed on the rear panel, which are joined by a further two line-level inputs provided by a pair of quarter-inch TRS sockets. Each of the four microphone inputs are equipped with their own independently switchable phantom power. An additional four quarter-inch TRS sockets offer four line-level outputs, whilst MIDI connectivity is taken care of by a pair of five-pin DIN connectors.

Two headphone outputs are present on quarter-inch TRS sockets placed on the front panel, and by default will mirror the signal routed to the device’s main outputs. A 3-4 switch next to one of the outputs allows its monitoring source to be switched to the second pair of line outputs, providing a completely independent headphone mix if required.

Connection to a host computer is available via USB-C, and although the device can be bus-powered, a connection for a 15V DC power supply is also included for those wishing to utilise the stand-alone monitoring facilities.

The M6's rear panel provides the majority of the device's I/O, and offers traditional five-pin DIN connectors for both MIDI in and out.

The M6 is supported on PCs running Windows 10 or higher, Macs running macOS 10.11 or higher, and on mobile devices running iOS9 or higher (with a Lightning adaptor where necessary).