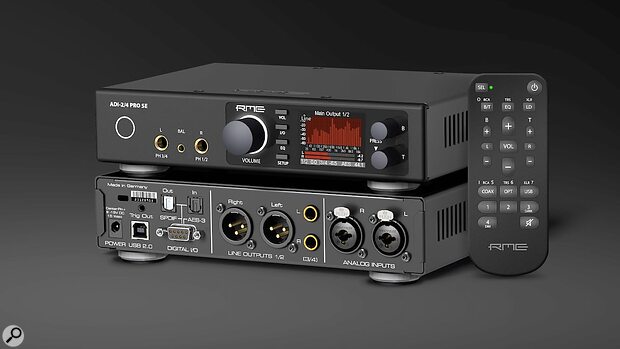 RME have announced the upcoming release of the ADI-2/4 Pro SE. This latest version of their award-winning ADI-2 Series A-D / D-A converter features newly developed circuitry which boasts up to 768kHz operation, and is equipped with powerful dual headphone amplifiers capable of driving balanced headphones.

The ADI-2/4 Pro SE offers two channels of analogue to digital conversion, and four channels of digital to analogue conversion, with the device’s 32-bit / 768kHz converters allowing the unit to deliver a signal-to-noise ratio of up to 123dBA at the main stereo outputs. Balanced analogue inputs are provided on XLR/TRS combo sockets, whilst the first two balanced analogue outputs are present on XLR connectors, and the second two provided as either balanced or unbalanced outputs via TRS connectors.

A pair of TRS sockets on the front panel offer balanced headphone connectivity, and a Pentaconn connector is also present for use with compatible IEMs. Thanks to independent balanced outputs for Line and Phones signals, the use of balanced headphones no longer mutes the rear outputs, and the Line and Balanced Phones outputs can also be used simultaneously, even with different sources or signals. The balanced TRS connections on the rear panel can be fed from either the Line 1/2 or Phones 3/4 signal path, which RME say is perfect for handling insert effects during the mastering process.

In terms of digital connectivity, the device is equipped with optical connectors which provide both S/PDIF and ADAT I/O, with an included breakout cable offering S/PDIF I/O on RCA connectors, as well as AES3 I/O via XLR. There is also a Class-Compliant USB 2.0 port, offering native compatibility with iOS, macOS, Windows 10, and Linux systems, and also serves as a way to update the product’s firmware.

When being used as a computer interface, the ADI-2/4 Pro offers both stereo (two in / two out) and multi-channel (six in / eight out) modes. Compatibility with macOS is available right out of the box, with Windows support available courtesy of RME's MADIface series driver, which offers full WDM and ASIO compatibility.

The device comes supplied with an RME MRC (Multi Remote Control), which provides control over the standby, volume, balance, EQ, input selection, mute, and loudness functions. There are also four programmable buttons that provide users with access to a total of 52 different functions and commands.

Detailed specifications for each input and output, both analogue and digital, can be found here.

The RME ADI-2/4 Pro SE is available to pre-order now, with availability yet to be confirmed, priced at £2195 including VAT.