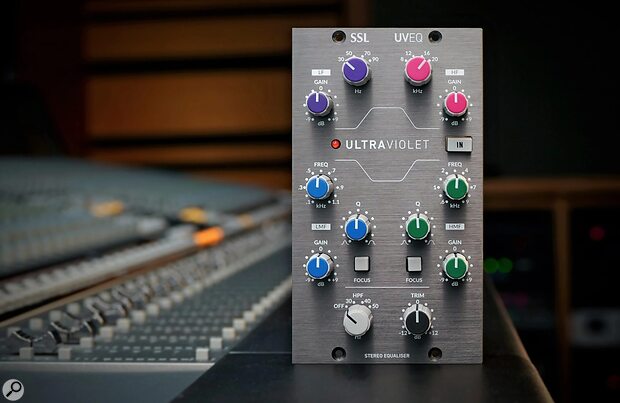 The UV EQ has its roots in the much-coveted SSL Fusion, and like that device, it too is a stereo processor. But where the Fusion's EQ section was a fairly basic two-band affair, the UV EQ module offers adjustment over four separate frequency bands. The HF and LF bands are both shelving types, offering ±9dB of gain at 30, 50, 70 or 90 Hz for the lows and 8, 12, 16 or 20 kHz for the highs. The two mid bands are both parametric types with continuously variable centre frequencies (100Hz-1.1kHz for the LMF; 600Hz-9kHz for the HMF), and independently adjustable Q. Like the shelving bands, these provide up to ±9dB of gain each, but this can be doubled to a radical ±18dB by pressing either of the mid bands' Focus buttons. As well as doubling the amount of available cut or boost, Focus mode narrows the filter's Q, allowing for either precise remedial EQ cuts or resonant peaking boosts.

At the bottom of the faceplate are dials for output trim (±12dB range) and a high-pass filter. The latter can apply a third-order (18dB/octave) filter at either 30, 40 or 50 Hz.

The SSL UV EQ is on sale now, and carries a price of £999 including VAT.

Next up is the SiX Channel, a single-width input-conditioning module based on the facilities found on the compact SiX Console. Like that device, the SiX Channel can accommodate mic, line or instrument sources, and in addition to dishing out a magnanimous 72dB of gain on mic sources, it sports a two-band EQ (each band being switchable between shelf and bell types), plus a one-knob compressor. Other features include the ability to provide phantom power, a polarity invert switch, a high-pass filter switch and metering for both input level and compressor gain reduction.

The SSL SiX Channel is also available today, for £335 including VAT.

Finally, SSL have also announced that all of their existing 500-series modules will be given a facelift, in the form of the same brushed-steel fascia as the two newcomers.