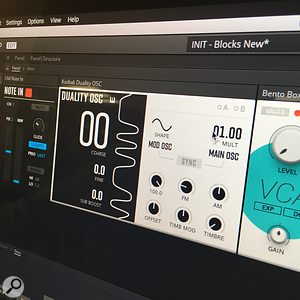 Duality OSC, one of the new Blocks for Reaktor 6 from Native Instruments At the Superbooth show in Berlin, Native Instruments were demonstrating five new Blocks for their popular Reaktor software. The first round of Blocks releases set out the idea of a Eurorack-style modular system within Reaktor. The second phase dealt with the connections between these virtual devices. Now, the latest round of releases focuses on being visually intuitive.

Duality OSC, pictured, is a dual oscillator that sports various intriguing options for unpredictable wave shaping. Among these are x-sync and reverse sync between the oscillators, as well as FM, continuously variable waveshapes and more. One neat touch is the visual representation of the oscillator output which is not only strangely mesmerising but is also coded to offload rendering to the graphics card, freeing up CPU.

Next is Shift Sequencer, a Block that lets you independently sequence note attributes for creating polyrhythms, and also has a built-in randomisation function.

Then there’s the Curve sequencer, the idea for which will be familiar to users of NI’s Massive softsynth. Essentially, it takes the mod source section from Massive, meaning you can quickly select different modulation curves and depths on a per-step basis. Naturally, it also includes all the ratcheting options for additional complexity.

Morph Filter is a resonant filter bank that specialises in vowel sounds, and sports a bunch of morphing options, and finally there’s Flip Gen. Flip Gen is a sine wave oscillator and a two-step sequencer with a probability control. This means that the frequency with the oscillator changes between two pre-selected frequencies can be wildly unpredictable. It seems to be perfectly capable for Geiger counter-type noises, rushing wind sounds but can also be played with a keyboard for a more musical effect. On top of that, the output can also be used as a mod source.