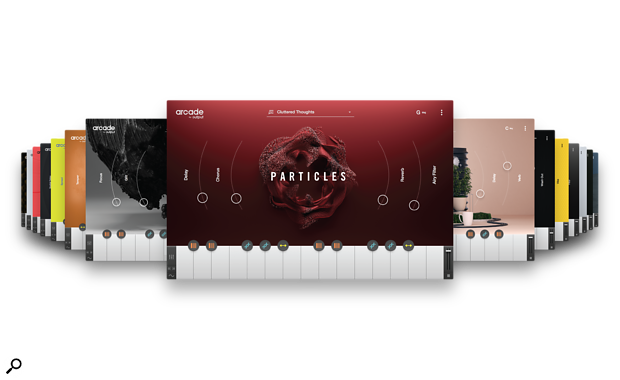 Output seem to have a knack for making virtual instruments that invite experimentation, and their latest product is no different. Although it is billed as “a playable loop synthesizer”, where Arcade differentiates itself is in the way it presents its content. Instead of organising samples into folders, all content is downloaded into the plug-in itself and organised into “sonic worlds” with descriptive names such as ‘Modular Circuitry’, ‘Field of Sounds’ and ‘Toys’. Output also promise to add more content daily.

Each sonic world has its own interface, all sporting four sliders that can control your choice of 11 effects. Samples are spread across white keys in a two-octave range, with black keys are used as modifiers for three varieties of on-the-fly manipulation. These are called Resequence, Playhead and Repeater. It also sports some pretty serious modulation capabilities.

You can drag and drop your own samples into the instrument, too, to make the sound your own, and each sample has its own mixer channel offering independent control over level, pan and two sends.

Founder and CEO, Gregg Lehrman says “All you have to do is watch someone use Arcade for 5 minutes and you grasp the impact this will have on music production. Our goal from day one has always been to help musicians be creative. I think this is a huge next step in the fulfilment of that vision and can’t wait to hear how it inspires and transforms music.”

Arcade works on a subscription model and costs $10/month, though it is free for the first 100 days. What happens if your subscription runs out, though? Thankfully, Output allow you still to access the instruments and sounds you have already used in projects, however, you will be locked out of the controls once your subscription expires.