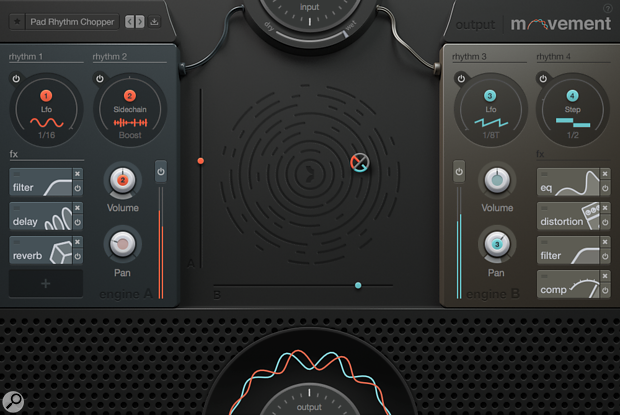 Output have released a new effects engine by the name of Movement. The company’s first effects engine is designed to add anything from simple to mind-bending rhythms to any instrument, synth, raw sound or full track. Movement is the fourth product from Output following it’s acclaimed software instruments Rev, Signal and Exhale.

Built for use in the studio and on stage, Movement is billed as "an extremely powerful and innovative tool crafted to be simple, intuitive and easy to use" by its makers. Movement boasts over 300 preset rhythms and the capacity to build your own from scratch using Flux, Sidechain, LFO or Step Sequencer rhythm modulation, as well as the XY pad which can be used to tweak up to 152 parameters in real time. Output have made the interface simple enough that it can be used in a live performance, and DAW-based automation is also possible.

“Movement is not only powerful but also incredibly musical,” says Output Founder Gregg Lehrman. “Whether you’re slowly bringing in and out subtle motion or adding insane movement, you’ll find that each and every rhythm combination is first and foremost musical.”

Movement is available today for $149 from Output's website. A 10% discount is offered for existing Output customers through June 9th.