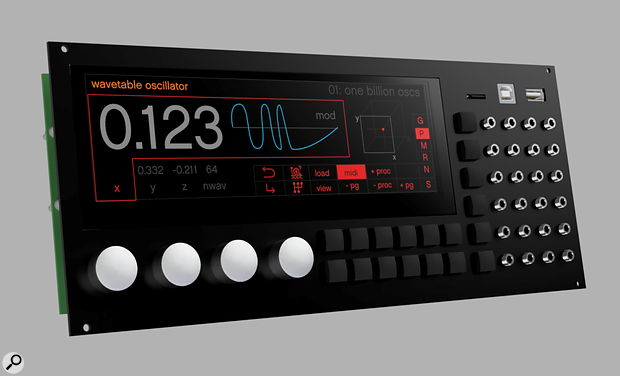 Percussa, who launched the Percussa Engine and Synthor System 8 at the Winter NAMM 2017 show, have been working with the Eurorack community to develop the Percussa Super Signal Processor (SSP) Eurorack module — a digital 60HP Eurorack synth system with a 1600x480 display that can run multiple software DSP modules in parallel. In order to bring it into production, they turned to Kickstarter and the result has been nothing short of phenomenal.

In under 12 hours, Percussa reached their initial funding goal of $20,000 and have been earmarked by Kickstarter as a ‘Project We Love'. Now they’re looking towards a $35,000 stretch goal which will fund the development of MIDI MPE (Multidimensional Polyphonic Expression) implementation. At the time of writing they had already passed the $28,000 mark, so we wouldn’t be at all surprised if they smash through this target as well.

The SSP is very similar to the Percussa Engine, the company’s synthesis platform but comes with additional input and output connectors, featuring Eurorack-compatible voltage.

The SSP sports a quad core ARM Cortex A17 1.8GHz processor — one of the fastest ARM processors available, offering over 20,000 DMIPS of computing power. For comparison, typical Eurorack modules use cortex M4 or M7 processors which stay under 500 DMIPS), and high-end converter chips by AKM, supporting sample rates up to 192kHz and 32-bit resolution.

The SSP will feature 8 outputs and 16 inputs and will support running multiple software DSP modules in parallel on multiple cores. The SSP features preset storage and recall, and DSP modules such as:

What’s particularly intriguing about the SSP is that it supports loading your own software DSP modules, which can be programmed in the C++ language.  In terms of connectivity, it will offer USB host and device ports for connecting a laptop for direct digital audio recording, or a USB MIDI class device for controlling the SSP. Storage wise the SSP will run of a microSD card, and a 16GB professional grade card is included in the main Kickstarter pledges for the product. The SSP comes with 2GB of internal RAM which is especially useful for loading large WAV files.

In terms of pledges, the Kickstarter offers normal production units ($1500), customization options and an interesting Godfather and Godmother pledge (only one of each), which allows you to donate 5 Percussa SSP modules to 5 schools of your choice, giving students access to this powerful Eurorack module.

More information about the Percussa SSP can be found on its Kickstarter page at: